There are many references to the number seven in the Bible.  What is this significance of this number and what does it mean or represent in Scripture?

Seven, the Template for Mankind

The number seven is a number of completeness, divine perfection or something that is finished, as in the creation week in Genesis one.  Even though God spends six days in creating the earth, He could have done it all on one day but I believe God is giving a pattern for mankind to follow.  That is, God is showing that since He worked six days, so should we.  God rested on the seventh day, not that He was tired but as an example for us to follow.  In fact, we are command to both work six days and to rest on the seventh as given in the Fourth Commandment in Exodus 34:21 “Six days you shall work, but on the seventh day you shall rest. In plowing time and in harvest you shall rest.”  Notice that God says “Six days you shall work” signifying that mankind is commanded to work for six days before being commanded to rest; therefore both work and rest are commanded and by His doing so, He gives us a pattern or an example of which we are to follow.

Creation and the designation for a week were both complete and finished in seven days which indicates that seven is a number of completion or a finished work.  God’s use of the number seven elsewhere in Scripture frequently has meaning and purpose as we shall read later on.

Other Significances in Seven 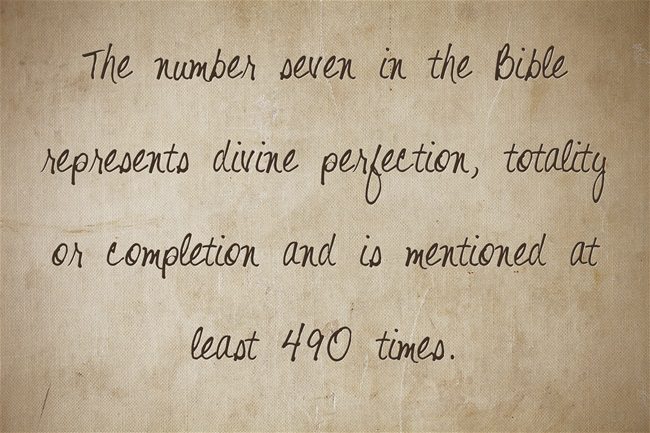 The number seven is a number of divine perfection or completion but if you have never had a day when you repented and trusted in Christ, your end will be anything but perfect. You still have the wrath of God abiding on you (John 3:18b, 36b) and will face a Holy God on Judgment Day (Rev 20:11-15) and so if you don’t have Jesus’ own righteousness imputed on your behalf (2 Cor 5:21) then your eternity will be spent outside of the presence of God and be forever separated from any chance of repentance and eternal life.  You can only be complete before God in Christ, so if you have never been born again, then today is the day for you to be saved (2 Cor 6:2) because tomorrow may be too late.