What Evidence Is There For Life After Death?

What Evidence Is There For Life After Death? November 11, 2014 Jack Wellman

Is there evidence that there is life after death?  What does the Bible say about this?

Eternity in our Hearts

Job asked, if a man dies, will he live again (Job 14:14)? Solomon wrote in Ecclesiastes 3:11 “He has made everything beautiful in its time. Also, he has put eternity into man’s heart, yet so that he cannot find out what God has done from the beginning to the end” which shows that the desire of man’s heart has always been to live eternally.  For thousands of years men have sought in vain an elixir of life, the fountain of youth, and the secret of eternity but outside of God’s Word, the search has been in vain.  The fact is that all will live on after this life but where one spends eternity at is a personal choice.   Everyone must make that decision for themselves.

The Moment after Death

Hebrews 9:27 says “And just as it is appointed for man to die once, and after that comes judgment” and so we all have an appointed to die, both believers and unbelievers, and we all will have to give an account for what we have done in this life.  The author of Hebrews doesn’t say that after we die we’ll have another chance but after death “comes judgment.” Jesus said “I tell you, on the day of judgment people will give account for every careless word they speak” (Matt 12:36) and on the day of His visitation “it will be more bearable for Sodom and Gomorrah on the day of judgment than for that town” and its inhabitants that reject Jesus Christ (Matt 10:15).  Like Lazarus and the rich man, the moment after they die they will know for a certainty where their eternity will be but the tragic thing is, for those who are separated from God by never repenting and trusting in the Savior, there will be no chance to repent, no way to seek God, and no way to be joined together again with your lost loved ones who have been saved.  This is why the rich man was told “between us and you a great chasm has been fixed, in order that those who would pass from here to you may not be able, and none may cross from there to us” (Luke 16:26).  Once a person chooses to reject believing in Jesus and they die in this state of unbelief, there is no opportunity to be saved as Jesus says “you would die in your sins, for unless you believe that I am he you will die in your sins” (John 8:24) just like the rich man did.

Evidence of Life after Death

Job seemed convinced that he would live again after he died when he said “If a man dies, shall he live again? All the days of my service I would wait, till my renewal should come” (Job 14:14). Job was certain that his renewal would come.  The word Job uses for “renewal” is a translation of the Hebrew word “chaliyphah” which means “a change, a change of raiment,” and “a replacement” which indicates that Job would live again and that he would see his Redeemer.  Job 19:25-26 says “For I know that my Redeemer lives, and at the last he will stand upon the earth. And after my skin has been thus destroyed, yet in my flesh I shall see God.” The word “Redeemer” is a proper noun and clearly refers to God.  The Hebrew word for “Redeemer” is “ga’al” and means “to ransom” or “to redeem” so Job saying that after he dies he would see his Redeemer and after his skin had been destroyed by death and decay he will have his flesh restored and see God.  This is crystal clear about Job’s knowledge of life after the grave.  Just because no human eye has seen or any human ear has heard doesn’t mean that it’s not true.  We who have believed cannot even imagine what this will be like in its fullness (1 Cor 2:9) but if a person dies in their sins, or as Paul puts it “in Adam” (or in man) there is no hope.  It is only in Christ that we shall be made alive again (1 Cor 15:22).  Just as God raised Jesus Christ from the dead, so too will he raise us up on the Last Day (1 Cor 6:14). We don’t need to see any evidence this side of the grave to know that beyond the grave we will either be with the Lord forever or we will be forever separated from Him because the Word of God says as much. 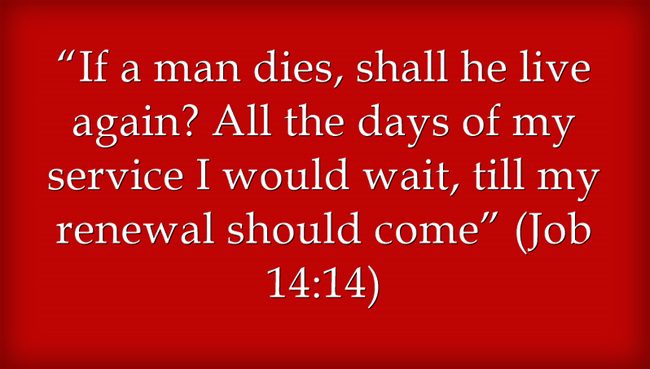 How to Live Again after Death

Daniel writes “many of those who sleep in the dust of the earth shall awake, some to everlasting life, and some to shame and everlasting contempt” (Dan 12:2). The difference is whether a person places their trust in the Savior or they reject Him.  For “those who are wise shall shine like the brightness of the sky above; and those who turn many to righteousness, like the stars forever and ever” (Dan 12:3).  What Daniel means about “those who turn many to righteousness” is for those who proclaim the gospel to the lost that they might be saved.  These whose desire is to rescue the perishing and lead some to saving faith in Christ, they will “shine like the brightness of the sky above” meaning the brightness of the son because their bodies will be glorified. The Apostle John write “Beloved, we are God’s children now, and what we will be has not yet appeared; but we know that when he appears we shall be like him, because we shall see him as he is.  And everyone who thus hopes in him purifies himself as he is pure” (1 John 3:2-3). If you have read what Jesus’ glorified body is like then you can imagine what our resurrected bodies will be like.

When Solomon asked the question “if a man dies, will he live again (Job 14:14)” the answer was yes, he will.  If there is only annihilation after death then Paul would say “Let us eat and drink, for tomorrow we die” (1 Corinthians 15:32) but we will live again after death and this is why Jesus warned us “whom you should fear: Fear Him who, after the killing of the body, has power to throw you into hell. Yes, I tell you, fear Him” (Luke 12:5). That is why the psalmist wrote that only “The fool says in his heart, ‘There is no God’” (Psalm 14:1).  That is why Paul tells us that today is the acceptable time of salvation because tomorrow it may be too late (2 Cor 6:2).  No one can know with 100% certainty that they will even live beyond today or that Christ might return to at any moment.  This moment is described in Matthew 25:31-34 “When the Son of Man comes in his glory, and all the angels with him, then he will sit on his glorious throne.  Before him will be gathered all the nations, and he will separate people one from another as a shepherd separates the sheep from the goats.  And he will place the sheep on his right, but the goats on the left.  Then the King will say to those on his right, ‘Come, you who are blessed by my Father, inherit the kingdom prepared for you from the foundation of the world.”  That’s why it’s called the “good news” but its bad news for the goats; “Then he will say to those on his left, ‘Depart from me, you cursed, into the eternal fire prepared for the devil and his angels” (Matt 25:41) “And these will go away into eternal punishment, but the righteous into eternal life” (Matt 25:46).  Choose today whether to be saved or to be lost and have God’s wrath abiding on you for all time (John 3:36b).  To make no choice is to reject Christ for He said “He that is not with me is against me” (Matt 12:30a).

November 8, 2014
Why Was Polygamy Allowed In The Bible?
Next Post