What Is The Bible Or Spiritual Meaning of Water?

What Is The Bible Or Spiritual Meaning of Water? November 11, 2014 Michael Krauszer

It’s no secret that water is important. Without it, all of us would die within a few days. Because of this, then, water often takes on pretty strong literary elements. Many times, in the form of rain, it can foreshadow something bad or ominous that is going to happen. At other times, it could imply a type of baptism, in which a character undergoes some type of change to his character, usually for the better. But, does this hold water (pun intended) when it comes to the spiritual or biblical meaning of water? What, exactly, can water mean when it is found within the Bible? A good way to find out, like usual, is to look at some passages and glean from what they have to say.

Genesis 7:17 “Now the flood was on the earth forty days. The waters increased and lifted up the ark, and it rose high above the earth.”

As the Genesis story goes, humankind’s sin was so horrendous that God became immensely grieved by it. As a way or purging the evil, He sent a flood to wipe out the wickedness from the earth, except for Noah, his family, and two of every kind of animal. Most of us know this story by heart, as it’s depicted in many children’s books and with a famous movie starring Russell Crowe. However, there is some insight into what water means in the Bible when one reads the passage. Water, here, is used as a purging or cleansing. It appears to be negative, since it is so destructive, yet it was used to literally cleanse the earth away from all that was evil and unholy. Throughout the Scriptures, water often takes on that meaning. 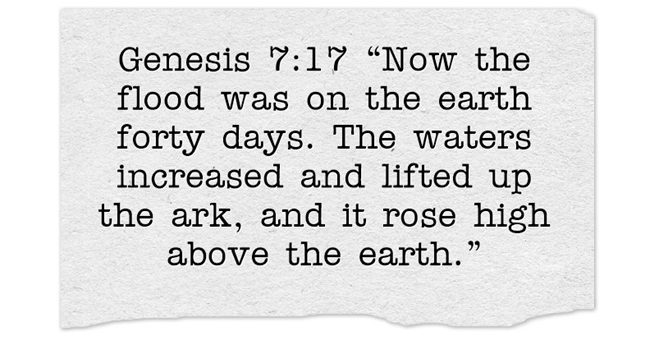 In addition to symbolizing some type of cleansing, water also points to satisfaction and life. This is precisely why Jesus is called the “living water,” which is noticeable in this passage. He tells the woman that when people come to Him, they will have complete satisfaction and never thirst for anything else in life. In contrast, when someone drinks physical water, they always need more to sustain their life. With Jesus, though, completeness is given. So, water can point to satisfaction and life, which is just another way of saying that is symbolizes Jesus!

Acts 8:36-38 “Now as they went down the road, they came to some water. And the eunuch said, ‘see, here is water. What hinders me from being baptized?’ Then Philip said, ‘if you believe with all your heart, you may.’ And he answered and said, ‘I believe that Jesus Christ is the Son of God.’ So he commanded the chariot to stand still. And both Philip and the eunuch went down into the water, and he baptized him.”

Water is the medium through which baptism is performed, and it’s extremely fitting. Since water can symbolize cleansing and life, it is perfect to use in baptism. When someone gets baptized, they are submerged under the water for a second, and then come back up. The whole process shows an outward expression of a true inner value; the person is publicly declaring that they have new life in Jesus Christ. All of the past sins and mistakes are dead (symbolic in the act of submerging the person in water) and then raised in newness of life (symbolic in the act of raising the person back up from the water). It is an expression of what has taken place within the heart; a full cleansing and new life.

So, water points to Jesus in many ways. It symbolizes a cleansing which only Jesus can give, a new life which Jesus offers, and is used in baptism to showcase the acceptance of Jesus and the denial of self. The Old Testament shows this, too; it is not exclusive to a New Testament theology. The point to take away, however, is that water does an excellent job at revealing Jesus, who claims to be the Living Water. It is He, and He alone, who can quench the thirsty souls in this world. The fact that water is used symbolically and powerful in the Scriptures just aids in showing us how beautifully written it is and how amazing Jesus is!

November 11, 2014
Parable of the 10 Virgins: Summary, Meaning and Commentary
Next Post

Should Christians Fight the Culture or...
Cranach
Related posts from Christian Crier