What Are The Origins and History of Easter?

Are the origins of Easter pagan?  If so, why do Christians celebrate this day while others don’t?

The Old English word Easter originates from the word “Ēastrun” and also “Ēastru” which comes from a pagan image called “Eastre” who is the mythological goddess of spring celebrated by Northern European Saxons. This celebration was to honor her and was always held during the spring equinox.  Some of the associated symbols used today are steeped in paganism.  The bunny represents fertility while the eggs picture a period of new birth.  Today, Easter is completely commercialized over much of the world by celebrating with painted Easter eggs and the Easter bunny, neither of which has any connection with Christianity.  In some Christian circles, this celebration is often called Pascha and is connected to the Hebrew “Pesach” and is related to the word Passover which commemorates the Exodus of Israel and the Passover feast.  The timing of the Passover Lamb being sacrificed at the exact time of Jesus’ death on the cross appears to be no coincidence but was part of the sovereign plan of God. The celebration a Christian festival of Pascha first started to appear in the mid-s2nd century.

Today, most churches do not necessarily call it Easter but Resurrection Sunday and this is based upon the day that Jesus was raised from the dead.  Some have sunrise services, although that is strictly a human invention and has no biblical merit to it.  Even so, many hold sunrise services on what is sometimes called Easter Sunday but is really Resurrection Sunday. In this way, the focus is on celebrating the risen Christ.  That is an essential doctrine of the Christian faith as Paul writes “that Christ died for our sins in accordance with the Scriptures, that he was buried, that he was raised on the third day in accordance with the Scriptures, and that he appeared to Cephas, then to the twelve.  Then he appeared to more than five hundred brothers at one time, most of whom are still alive, though some have fallen asleep” (1 Cor 15:3b-6) because “if Christ has not been raised, your faith is futile and you are still in your sins. Then those also who have fallen asleep in Christ have perished. If in Christ we have hope in this life only, we are of all people most to be pitied” (1 Cor 15:17-19) and “if there is no resurrection of the dead, then not even Christ has been raised.  And if Christ has not been raised, then our preaching is in vain and your faith is in vain” (1 Cor 15:13-14).  The good news is that “Christ has been raised from the dead, the firstfruits of those who have fallen asleep.  For as by a man came death, by a man has come also the resurrection of the dead.  For as in Adam all die, so also in Christ shall all be made alive” (1 Cor 15:20-22). 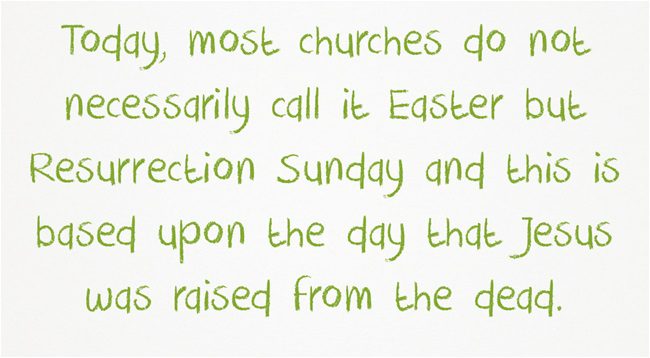 This is a question that only the parents and their church leaders can answer for their own family.  I don’t believe that the tradition of painted Easter eggs and Easter bunnies are biblical at all, however there are many pagan practices that have slipped into the modern culture without most people even being aware of it.  Even the wedding ring is believed to be of pagan origin but Christians who marry see no connection to pagan practices at all.  Instead the wedding ring represents the unbroken circle that can never be broken as marriages are intended to be until death they do part.  It is a symbol of their belonging to someone else.the two becoming one.  Just because pagans used these for part of their pagan attire and worship doesn’t mean that Christians see them as pagan.  The Romans were the first to use finger rings to symbolically tie people to not only their social classes but also to their marital partner.  This may be the earliest use of what we see as the wedding ring.  Getting back to the Easter celebrations, the same could be said of this festival or holiday.  Everyone must answer according to their own conscience whether they feel that the traditions and trappings of the Easter activities are wrong for them.  I cannot and will not sit in judgment of those who do participate in these things.  Our church recognizes this as a holy day or as we call it, Resurrection Sunday, in honor of the risen Christ and giving us that promise that we too will be raised someday to eternal life.

It is recognized by most that Easter Sunday is the day that Christians celebrate and recognize Jesus’ being raised from the dead and that day is believed to be Sunday.  The Scriptures certainly testify to that fact.  For example, Mark 16:9 says “Now when he rose early on the first day of the week, he appeared first to Mary Magdalene, from whom he had cast out seven demons.”  The first day of the week is obviously and widely recognized to be Sunday so Jesus rose from the dead on this day.  Jesus said that “just as Jonah was three days and three nights in the belly of the great fish, so will the Son of Man be three days and three nights in the heart of the earth” (Matt 12:40).  For certain, the Christian focus remains on Christ and His resurrection, not on the painting of, hiding of, and hunting of Easter eggs or buying Easter bunnies.   Whether you call it Easter Sunday or Resurrection Sunday, most are still celebrating the risen Christ, not the mythological pagan goddess “Eastre” or “Eostre.”

Whatever you call this day, you must believe that Jesus was raised from the dead.  You must repent or turn from your sins, and then confess them to God and finally, place your trust in Christ because “the last enemy to be destroyed is death” (1 Cor 15:26).  If you don’t believe and “If the dead are not raised, ‘Let us eat and drink, for tomorrow we die'” (1 Cor 15:32b) but I know that “in fact Christ has been raised from the dead, the firstfruits of those who have fallen asleep” (1 Cor 15:20) so “since we believe that Jesus died and rose again, even so, through Jesus, God will bring with him those who have fallen asleep” (1 Thess 4:14) and I also know that someday “we will be with the Lord forever. Therefore encourage one another with these words” (1 Thess 4:17c-18).