3 Examples Of Answered Prayers In The Bible

When I first started thinking about the subject for this article, I wondered how I could keep my examples of answered prayer to only three. The entire Bible is one long story of the prayers of God’s people and how He answered them – and is still answering them today. So after much thought, I picked three instances – one from the Old Testament, two from the New Testament – of specific times when someone prayed and their prayers were answered.

First of all, let’s define “prayer.” According to Merriam-Webster, prayer is “an address (as a petition) to God…in word or thought.” To pray is to talk to God, whether giving Him praise, thanksgiving, or expressing your needs or desires. So here are three examples from the Bible of people who praised God, thanked God, or asked Him for something, and saw their prayers answered.

1 Kings 17:21-22 (ESV) “Then he stretched himself upon the child three times and cried to the Lord, ‘O Lord my God, let this child’s life come into him again.’ And the Lord listened to the voice of Elijah. And the life of the child came into him again, and he revived.”

Elijah was an Old Testament prophet of God. He did many wondrous works for God, some of which made him popular among people, other times he was less than popular. But he knew that whether his deeds were popular or not, he must obey God’s commands. But just as Elijah listened to God’s voice, God himself listened to Elijah. Their relationship was one that in the Old Testament was reserved for priests and prophets, but today is available to anyone who accepts Jesus into their life.

In these verses from 1 Kings, Elijah had been staying with a widow woman and her son. He had already blessed the widow and proven himself as a man of God by miraculously causing her food not to run out, so that the widow, her son, and Elijah could all eat during a time of famine and drought. But during his stay, the widow’s son became ill and died. When Elijah prayed for the child’s life to return to him, God answered right away. This is a dramatic, immediate instance of God answering prayer.

Luke 1:47-50 (ESV) “…and my spirit rejoices in God my Savior, for he has looked on the humble estate of his servant. For behold, from now on all generations will call me blessed; for he who is mighty has done great things for me, and holy is his name. And his mercy is for those who fear him from generation to generation.”

This is Mary’s song of praise to God, sometimes referred to as the Magnificat. This is during the time that she is pregnant with Jesus and goes to visit her cousin Elizabeth, who is pregnant with John (who grows up to be John the Baptist). When Elizabeth tells Mary that at the sound of her greeting “…the baby in my womb leaped for joy” (Luke 1:44), Mary then gives a prayer of praise to God.

Praise, worship, and thanksgiving are forms of prayer. But in this prayer, Mary also does make a request of sorts; she says “…from now on all generations will call me blessed.” This is not something that is possible for Mary to accomplish by herself – it’s not within her power alone to be blessed, or to have succeeding generations remember her and call her blessed. God listened to her prayer, and today, two thousand years later, God is still answering her prayer because we still remember Mary’s name and honor her for what she did.

Matthew 26:39 (ESV) “And going a little farther he fell on his face and prayed, saying, ‘My Father, if it be possible, let this cup pass from me; nevertheless, not as I will, but as you will.'” 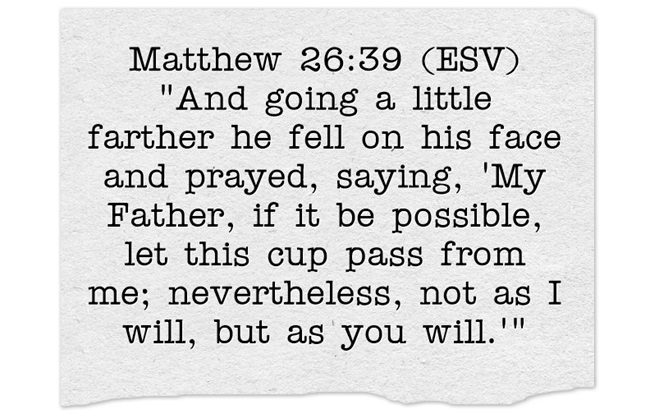 This is a prayer of Jesus. While he was on the earth, Jesus set the example of how we should talk to God by saying prayers himself. This particular prayer was done in Gethsemane, the night that he was betrayed and arrested. He knew what was going to happen. In this prayer, Jesus pleads with his Father to avoid the torture and death that he knew awaited him.

But Jesus knew that there wasn’t a way to avoid what was coming, no matter how much he dreaded it. And so he ended his prayer with a statement of complete obedience to God: “…not as I will, but as you will.” This is the part of the prayer that God answered, because it was the only part that He could answer.

God will not do things contrary to His nature, contrary to His laws, or contrary to love. In all of these examples, the prayers did not defy God’s nature or His laws. God always wants to answer our prayers to our satisfaction, but if we pray against His will for our lives, then it might appear that our prayers go unanswered. Jesus expressed his desires to God, but because he knew what was at stake, his ultimate desire was to do what God wanted him to do.

Grace Robinson was born and raised in Virginia, Grace studied English and creative writing at Hollins University. Currently living in Virginia with a rabbit and a lot of books, she’s a writer of fantasy and a fan of arctic places, world music, mythology, and linguistics. Soon-to-be world traveler and published author, Grace hosts her own blog and works for Helps2Media as a content supervisor.