What Does The Right Hand Symbolize or Mean In The Bible?

Is there special meaning or significance to the “right hand” in Scripture? What does the right hand symbolize?

The Hand of Authority

You’ve probably heard the phrase “he’s my right hand man” but where does this phrase come from? I believe it comes from the Bible. This words “right hand” occurs 166 times in the Bible so it is no accident that the words “right hand” has significant meaning. God inspired Isaiah to write “For I, the Lord your God, hold your right hand; it is I who say to you, “Fear not, I am the one who helps you” (Isaiah 41:13). The right hand signifies strength, perhaps because most people are right-handed and that is the hand that normally has their greatest strength. Most people write with their right hand, they do the most difficult things with their right hand, and it is the hand where the strength typically occurs.

The religious leaders were constantly trying to trap and trick Jesus into enigmatic questions so He once told them “The Lord said to my Lord, “Sit at my right hand, until I make your enemies your footstool” (Luke 20:42-43) which, being at the right hand, is the place of authority to whoever sits on the throne, and in this case, it was about God the Father and Jesus being the one who was to be and is currently seated at the right hand of the Father. Jesus made reference to this during His illegal trial saying “from now on the Son of Man shall be seated at the right hand of the power of God” (Luke 22:69). That is where the Son of God is presently at. This is mentioned in Mark 16:19 “So then the Lord Jesus, after he had spoken to them, was taken up into heaven and sat down at the right hand of God.”

James and John once came up to Jesus and asked Him “Grant us to sit, one at your right hand and one at your left, in your glory” (Mark 10:37) but Jesus responded “to sit at my right hand or at my left is not mine to grant, but it is for those for whom it has been prepared” (Mark 10:40). The other disciples knew what this meant which was why “they began to be indignant at James and John” (Mark 10:41) so it is evident that being at the right hand is symbolic of having authority and power. This is seen throughout the Scriptures as in Paul writing about God that He “raised him from the dead and seated him at his right hand in the heavenly places, far above all rule and authority and power and dominion, and above every name that is named, not only in this age but also in the one to come” (Eph 1:20-21).

The Hand of Blessing

The ancient patriarchs usually blessed their children and grandchildren with their right hand as with the case of Jacob, whose name was later changed by God to Israel, for example when “Israel stretched out his right hand and laid it on the head of Ephraim, who was the younger, and his left hand on the head of Manasseh, crossing his hands (for Manasseh was the firstborn)” (Gen 48:14). 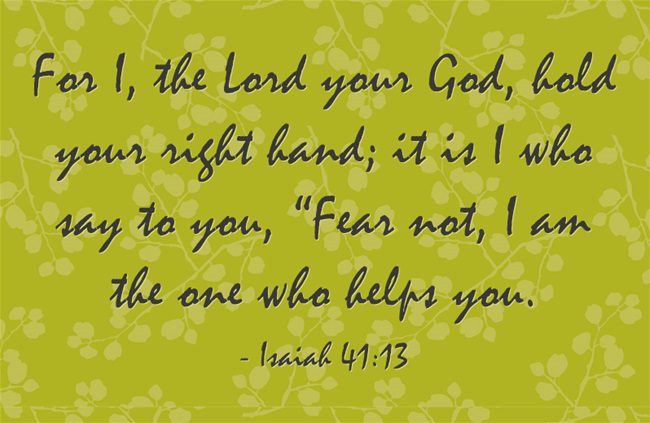 The Hand of Strength

I mentioned that the right hand is the one which, for most people, has the greatest strength and that is symbolized in many Scriptures when it refers to God as in Exodus 15:6 “Your right hand, O Lord, glorious in power, your right hand, O Lord, shatters the enemy” and often used against His enemies as in Exodus 15:12 “You stretched out your right hand; the earth swallowed them.” Just prior to Moses’ death He blessed Israel with this blessing, “The Lord came from Sinai and dawned from Seir upon us; he shone forth from Mount Paran; he came from the ten thousands of holy ones, with flaming fire at his right hand” (Duet 33:2). These “ten thousands of holy ones” are likely speaking about God’s holy angels. When John saw Jesus he “fell at his feet as though dead. But he laid his right hand on me, saying “Fear not, I am the first and the last” (Rev 1:17) so by His right hand He strengthened him. Isaiah provides further evidence of this by writing “fear not, for I am with you; be not dismayed, for I am your God; I will strengthen you, I will help you, I will uphold you with my righteous right hand” (Isaiah 41:10).

The Sacrificial Significance of the Right Side

The Hand of Sovereignty

Clearly we see that the right hand is symbolic of ruler-ship, authority, sovereignty, blessing, and strength and is significant in Scripture. We even see this in separating the sheep from the goats at the judgment as Jesus said “Before him will be gathered all the nations, and he will separate people one from another as a shepherd separates the sheep from the goats. And he will place the sheep on his right, but the goats on the left” (Matt 25:32-33). Being on the right side is critical to our eternal destiny and fatal to those on the left. For all who trust in Christ, they will be placed on the right hand side of Christ because they will have imputed to them the very righteousness of the Son of God (2 Cor 5:21).

June 13, 2015
What Does The Bible Say About Friendship?
Next Post