The Number of Man

The number six is symbolic of man in many ways because man was created on the sixth day. For another thing, men are appointed to work for six days and after six days of labor, they are to rest on the seventh day. The sixth commandment prohibits the murder of man and the supposed unholy trinity of the beast and his number is 666 so this is why it is sometimes referred to as an unholy trinity and as such the bringing together of three 6’s is the number and mark of the end time Beast of Revelation. As such, it represents the very best human system of governance that mankind can produce without God and remains under the constant influence of his chief adversary the Devil so it inherently falls far short of the standards by which God puts forth in the Bible. This is noted in Revelation 13:18 “This calls for wisdom: let the one who has understanding calculate the number of the beast, for it is the number of a man, and his number is 666.” The idea is that the beast is of human origin but might not receive his power from man but from the “dragon” which is another name for Satan (Rev 13:11).

We have already read that the number six can be seen as the number that’s representative of man since humans were created on the sixth day as noted in Genesis 1:31. We also know that man was given a command from God to work for six days but no more, so the idea that mankind should work seven days a week is a manmade concept and breaks the Fourth Commandment of a commanded rest for one of every seven days but the number six can be seen as also representative of the number of imperfection, even though man was created perfect in every way on the sixth day but as we know, it didn’t last long (Gen 3). Looking at this from the perspective of the week, six days is an imperfect week because it is one day short of a perfect, completed week of seven days. Since man was created on the sixth day, and six days is an imperfect week, then the perfect evil can be seen in the number of man, 666 (Revelation 13:18), and as it turns out, it is a sort of unholy trinity. 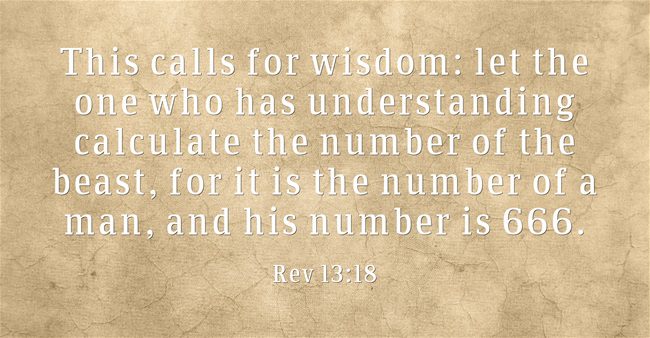 I find it interesting that there were six cities of refuge given to the Levites for those who accidentally killed or caused great harm to others. These were places for them to take refuge (Numbers 35:6). The reason that God established these cities was so that family members would not retaliate against them for the harm they inflicted upon their own family members, even though it was proven to be by accident and not done intentionally. Accidents happen in imperfect man and so again, the number six also seems representative of the weakness of man and his propensity for having accidents and doing unintentional harm.

The Walls of Jericho and the Number Six

We read in Joshua, naturally in chapter six, that God gave Joshua and Israel this command; “You shall march around the city, all the men of war circling the city once. You shall do so for six days. Also seven priests shall carry seven trumpets of rams’ horns before the ark; then on the seventh day you shall march around the city seven times, and the priests shall blow the trumpets. It shall be that when they make a long blast with the ram’s horn, and when you hear the sound of the trumpet, all the people shall shout with a great shout; and the wall of the city will fall down flat, and the people will go up every man straight ahead” (Joshua 6:3-5). For six days they marched around the city-state of Jericho and on the seventh day, the horns were blown and the walls came crashing down. This is symbolic of the creation week too. Man worked (marched) for six days and on the seventh day he rested (and the walls came down). We see this recorded in Joshua 6:15-17a “On the seventh day they rose early, at the dawn of day, and marched around the city in the same manner seven times. It was only on that day that they marched around the city seven times. And at the seventh time, when the priests had blown the trumpets, Joshua said to the people, “Shout, for the Lord has given you the city. And the city and all that is within it shall be devoted to the Lord for destruction.”

The number six represents mankind and mankind’s system of government and just as six is an imperfect week without the seventh day, mankind is incomplete or imperfect without God without the atoning work of Christ on Calvary. In an indirect way, this shows that man is not perfect but He can become righteous in God’s eyes when Jesus becomes sin for us so that God will see us as having Jesus’ righteousness (2 Cor 5:21). Mankind the imperfect can be seen as perfected because of the perfect God-Man, Jesus Christ’s sacrifice. Without the imputed righteousness of Christ, then the wrath of God will come to all who have not been forgiven (Rev 20:12-15) and declared righteous by the sinless sacrifice of Christ.

June 14, 2015
Top 7 Comforting Bible Verses for the Downhearted
Next Post