What Does Yoke Mean In The Bible?

If you’ve read the Bible you’ve probably heard the use of the word “yoke.” What does the Bible mean in reference to a yoke?

What is a Yoke?

A yoke is a fitting for a so-called beast of burden that would be placed around the neck of one or more animals like an ox for example. This fitting was placed around the neck in order to allow the animal or animals for the purpose of pulling loads and typically consisted of a curved piece of wood with leather straps as a binding which would allow them to draw a plough or a cart or any other type of weight. Sometimes a yoke would be symbolic of being in captivity or under slavery or bondage like in Leviticus 26:13 when God said “I am the LORD your God, who brought you out of Egypt so that you would no longer be slaves to the Egyptians; I broke the bars of your yoke and enabled you to walk with heads held high.”

Take My Yoke Upon You

Jesus once used the word yoke in a very special way saying “Take my yoke upon you, and learn from me, for I am gentle and lowly in heart, and you will find rest for your souls” (Matt 11:29) but what did He mean by this? In the context of this Jesus had preceded this statement by saying “Come to me, all you who are weary and burdened, and I will give you rest” (Matt 11:28) so He was talking about the fact that only He can give us rest from the heavy burdens and sorrows that this world can sometimes bring. We can rest in the fact that as a yoke does with animals, our load is shared and becomes less burdensome with Him. That’s why He concluded by saying “For my yoke is easy and my burden is light” (Matt 11:30). Maybe you’ve heard the phrase that a joy shared is doubled but a burden shared is halved. This is the idea of taking upon us the yoke that Jesus provides and we can learn from Him and that should give us “rest for [our] souls.” 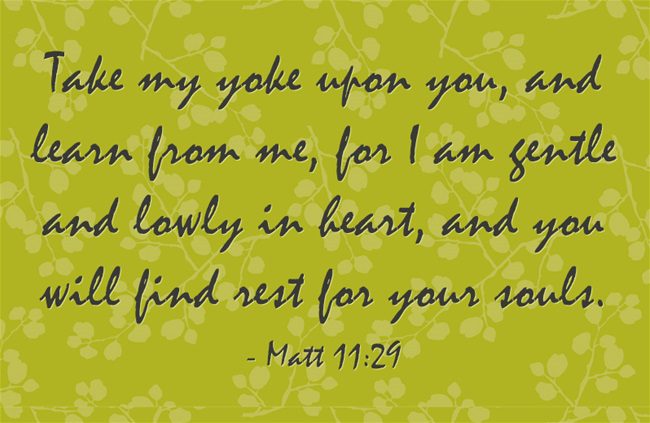 Paul also wrote about a yoke but in this case it was an unequal yoke having to do with relationships writing in 2nd Corinthians 6:14-16a “Do not be yoked together with unbelievers. For what do righteousness and wickedness have in common? Or what fellowship can light have with darkness? What harmony is there between Christ and Belial? Or what does a believer have in common with an unbeliever? What agreement is there between the temple of God and idols?” Next Paul clarifies what he is saying by quoting the Old Testament verse of Isaiah 52:11 but which is also repeated in Revelation 18:5 “Come out from them and be separate, says the Lord. Touch no unclean thing, and I will receive you” (2nd Cor 6:17). For one thing this means that we should “not to associate with sexually immoral people” (1 Cor 5:9) because “If we claim to have fellowship with him and yet walk in the darkness, we lie and do not live out the truth” (1 John 1:6).

The Law of the Yoke

God commanded a law of mercy in the Old Testament about not yoking animals together that was not the same. God forbid this because it was inhumane to make different animals pull the same load because one would have to carry most of the weight. This is mentioned in several places in the Old Testament such as in Deuteronomy 22:10 which said “Not to work with beasts of different species, yoked together.” For example, if you had a donkey on one side and an ox on the other, the ox would carry most of the weight and the fact that a donkey is more stubborn, they might try to veer to the right or to the left, or stop altogether and the ox might end up carrying the entire load plus drag the donkey along.

Jesus gives us rest but apart from Him there is only toil and trouble. We should take Jesus’ yoke because our burdens are too heavy to bear by ourselves. We should also not be yoked with an unbeliever which means we also must not marry unbelievers because we are going to be going in two different directions. Amos asks the rhetorical question “Do two walk together, unless they have agreed to meet” and the obvious answer is no (3:3).

Into Turkey-- Part Seventeen
Hierapolis, or Priest town, is the last of our city visits to...
view all Evangelical blogs
What Are Your Thoughts?leave a comment