Why Did Jesus Curse The Fig Tree? A Bible Study

Why Did Jesus Curse The Fig Tree? A Bible Study July 10, 2015 Jack Wellman

Why exactly did Jesus curse the fig tree? What was the symbolism of that? What was He trying to teach the disciples and us?

There were two encounters of Jesus’ and the fig tree and these are found in the gospels of Matthew and of Mark and even though there are slight differences, they essentially come to the same conclusion. Here is the account as given in Matthew 21:18-19; “In the morning, as he was returning to the city, he became hungry. And seeing a fig tree by the wayside, he went to it and found nothing on it but only leaves. And he said to it, “May no fruit ever come from you again!” And the fig tree withered at once.” In Mark is very close to the same thing “On the following day, when they came from Bethany, he was hungry. And seeing in the distance a fig tree in leaf, he went to see if he could find anything on it. When he came to it, he found nothing but leaves, for it was not the season for figs. And he said to it, “May no one ever eat fruit from you again.” And his disciples heard it.” (Mark 11:12-14). Why did Jesus curse the fig tree? What lesson was He giving to the disciples and by extension, what was He teaching us?

Fruitfulness and the Fig Tree

Why did Jesus curse the fig tree? Perhaps it was an analogy of Israel as the fig tree is symbolic of the nation and had been for hundreds of years. They were to produce fruit but time and again they failed to do so by falling into idolatry. The fig tree was symbolic of prosperity as we read in 1st Kings 4:25 where “every man sitting under his own fig tree” but the fig tree was also referenced when Adam and Eve “sewed fig leaves together to hide their nakedness” (Gen 3:7) after they had sinned. Fig trees were extremely common in Canaan before Israel entered the land and were one of the seven species listed among the produce of the land God would give Israel (Deut 8:8). Both Jesus and James used the production of figs as an example that actions and words flow from the heart of a person. In Luke 6:43-45 Jesus tied in the producing of figs with bearing righteous fruit saying “each tree is known by its own fruit. For figs are not gathered from thornbushes, nor are grapes picked from a bramble bush. The good person out of the good treasure of his heart produces good, and the evil person out of his evil treasure produces evil, for out of the abundance of the heart his mouth speaks.” James wrote essentially the same things “Does a spring pour forth from the same opening both fresh and salt water? Can a fig tree, my brothers, bear olives, or a grapevine produce figs? Neither can a salt pond yield fresh water” (3:11-12). 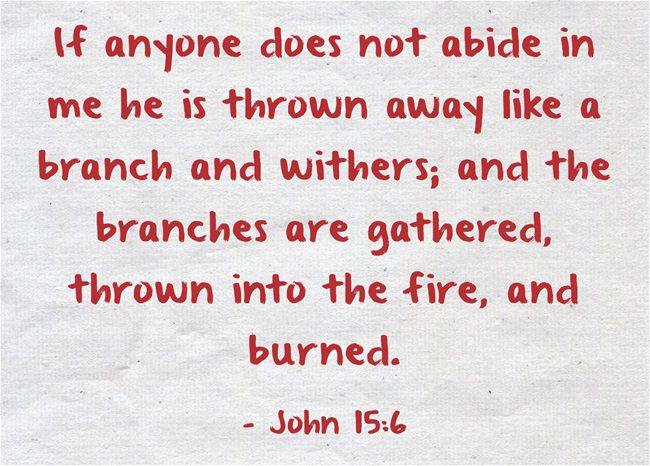 No Fruit with No Abiding

Fruit bearing is closely tied to the godly fruits of the Spirit as we see in Galatians 5:22-23a where the fruits are “joy, peace, patience, kindness, goodness, faithfulness, gentleness, [and] self-control.” Jesus reveals that no one can produce any fruit at all unless they abide in Him as He is the vine and as we read in John 15:5-8 where He says “I am the vine; you are the branches. Whoever abides in me and I in him, he it is that bears much fruit, for apart from me you can do nothing. If anyone does not abide in me he is thrown away like a branch and withers; and the branches are gathered, thrown into the fire, and burned. If you abide in me, and my words abide in you, ask whatever you wish, and it will be done for you. By this my Father is glorified, that you bear much fruit and so prove to be my disciples.”

The Fate of Unfruitfulness

In John 15, Mark 11 and in Matthew 21, Jesus ties in the idea that if a branch doesn’t produce fruit “the branches are gathered, thrown into the fire, and burned” (John 15:6). Jesus returned to the fig tree and the account given by Mark is says “On the following day, when they came from Bethany, he was hungry. And seeing in the distance a fig tree in leaf, he went to see if he could find anything on it. When he came to it, he found nothing but leaves, for it was not the season for figs. And he said to it, “May no one ever eat fruit from you again.” And his disciples heard it.” (Mark 11:12-14). The point of all of these three portions of Scripture is that if a vine doesn’t produce fruit, it is gathered to be burned and the fig tree that withered would end up with the same fate; it too would be gathered together to be thrown into the fire. Fire is almost always a symbol of God’s final judgment. If there is no fruit then there has been no abiding in the vine for Jesus said “the branch cannot bear fruit by itself, unless it abides in the vine, neither can you, unless you abide in me” (John 15:4). If someone claims to be a believer and yet produces no fruit, then they can talk all they want; they are obviously not abiding in the Vine and that is Jesus Christ.

Where is the final place for all who refuse to repent and trust in Christ? Revelation 21:8 says “But as for the cowardly, the faithless, the detestable, as for murderers, the sexually immoral, sorcerers, idolaters, and all liars, their portion will be in the lake that burns with fire and sulfur, which is the second death” which is strikingly similar to Jesus statement about the branches that don’t produce fruit; “If anyone does not abide in me he is thrown away like a branch and withers; and the branches are gathered, thrown into the fire, and burned” (John 15:6). Both the unrepentant sinners and the branches that don’t produce any godly fruit are headed for fire and God doesn’t desire that any perish but that all would come to repentance (2nd Pet 3:9) and He takes no pleasure in the death of the wicked (Ezk 33:11).