What Does A Lion Mean Or Represent In The Bible?

What Does A Lion Mean Or Represent In The Bible? July 13, 2015 Jack Wellman

What does the lion represent in the Bible? What does it mean?

The Lion as Satan

Peter warned the Christians in his day to “Be sober-minded; be watchful. Your adversary the devil prowls around like a roaring lion, seeking someone to devour” (1 Pet 5:8). We already know from the Book of Job that Satan roams the earth as Job wrote “The LORD said to Satan, “Where have you come from?” Satan answered the LORD, “From roaming throughout the earth, going back and forth on it” (Job 1:7). Satan loves to take the Word of God and snatch it out of the hearts of those who hear it as Jesus said in the Parable of the Sower, “Some people are like seed along the path, where the word is sown. As soon as they hear it, Satan comes and takes away the word that was sown in them” (Mark 4:15). Paul describes his deliverance as out of the mouth of the lion in 2nd Timothy 4:17 “But the Lord stood at my side and gave me strength, so that through me the message might be fully proclaimed and all the Gentiles might hear it. And I was delivered from the lion’s mouth” indicating that Satan, as a lion, tries to consume all believers and he especially saw Paul as a threat to his kingdom of darkness since the message of the gospel was being sent through the Roman Empire by him.

The god of this World

Paul also warns us about Satan “that we would not be outwitted by Satan; for we are not ignorant of his designs” (2nd Cor 2:11) because “The god of this age has blinded the minds of unbelievers, so that they cannot see the light of the gospel that displays the glory of Christ, who is the image of God” (2nd Cor 4:4) so at times we see Satan as depicted as a lion in the sense that he seeks out stragglers and the weak and injured prey and for the Christian, this could well mean those who are hurting and have separated themselves from the sheepfold of which Jesus is the Great Shepherd as the Head of the Church. Daniel was thrown into the lion’s den yet “Daniel answered, “May the king live forever! My God sent his angel, and he shut the mouths of the lions. They have not hurt me, because I was found innocent in his sight. Nor have I ever done any wrong before you, Your Majesty” (Dan 6:21-22) indicating that even though the lion is dangerous and can kill, maim, or injure, God can shut the lion’s mouth as He is sovereign over Satan and allows the “lion” (as Satan) to do no more harm than He wills (Job 1:12). 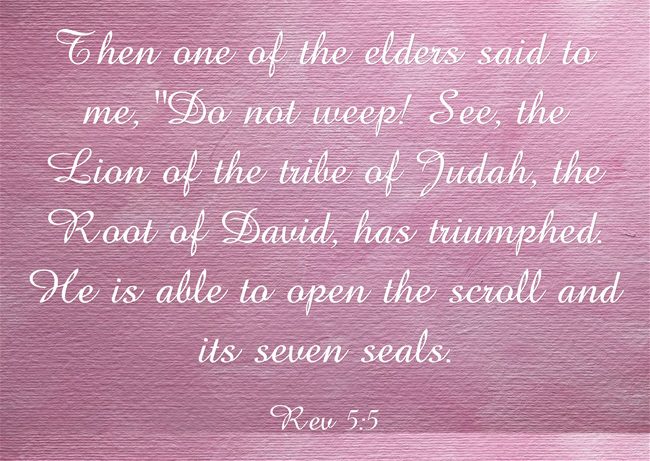 Jesus as the Lion

Jesus Christ is called the Lion of the Tribe of Judah as we read in Revelation 5:5 “Then one of the elders said to me, “Do not weep! See, the Lion of the tribe of Judah, the Root of David, has triumphed. He is able to open the scroll and its seven seals.” When Jacob blessed his children, the sons of Israel (Jacob’s name was changed to Israel) he put a special blessing on the tribe of Judah saying “Judah, your brothers will praise you; your hand will be on the neck of your enemies; your father’s sons will bow down to you. You are a lion’s cub, Judah; you return from the prey, my son. Like a lion he crouches and lies down, like a lioness—who dares to rouse him” (Gen 49:8-9). During David’s reign, his kingdom was the most powerful on earth at that time and no one dared attack him or his kingdom.

Jesus’ Coming Reign as the Lion

The blessing of Jacob is also a prophecy about the tribe of Judah and speaks of Jesus Christ and His coming reign over all the earth “The scepter will not depart from Judah, nor the ruler’s staff from between his feet, until he to whom it belongs shall come and the obedience of the nations shall be his” (Gen 49:10). This blessing/prophecy refers to the scepter as being the ruler of Judah and will “reign over all the earth” because Israel never did this as a nation. This is obviously referring to Jesus Christ and this rule came at great cost to Him as it was foretold that “He will tether his donkey to a vine, his colt to the choicest branch he will wash his garments in wine, his robes in the blood of grapes” (Gen 49:11). This verse seems to be prophecy about Jesus which points to the shed blood that would be spilled for all who would trust in Him in the supreme sacrifice of the sinless Son of God and even His triumphant entrance into Jerusalem on a donkey which was a colt and had never been ridden on which was fulfilled in Mark 11:1-11 on what is called Palm Sunday. Mark writes where Jesus instructed the disciples to “Go to the village ahead of you, and just as you enter it, you will find a colt tied there, which no one has ever ridden. Untie it and bring it here. If anyone asks you, ‘Why are you doing this?’ say, ‘The Lord needs it and will send it back here shortly’” (Mark 11:2-3) and so “They went and found a colt outside in the street, tied at a doorway. As they untied it, some people standing there asked, “What are you doing, untying that colt?” They answered as Jesus had told them to, and the people let them go” (Mark 11:4-6). This was followed by “Blessed is the coming kingdom of our father David! Hosanna in the highest heaven” (Mark 11:10).

Whenever we read about a lion, context is king. It can either refer to Jesus Christ as the Lion of the Tribe of Judah or it can refer to Satan who is roaming about as a roaring lion, seeking out whom he might destroy. One is a destroyer…the other is the Savior. You are either under one or the other and I strongly urge you to repent today and trust in the Lion of the Tribe of Judah if you have not yet done son or your destruction will come suddenly someday (Rev 20:12-15).

July 13, 2015 How Is Jesus The Alpha And The Omega In The Bible?
Recent Comments
1 Comment | Leave a Comment
Browse Our Archives
get the latest from
Evangelical
Sign up for our newsletter
POPULAR AT PATHEOS Evangelical
1