Who Was Stephen In The Bible? A Character Study

Who Was Stephen In The Bible? A Character Study July 18, 2015 Jack Wellman

Who was Stephen in the Bible? What did he do to make such an impact?

Stephen’s name is derived from the Greek name “Stéfanos” and means “honor,” “wreath” or “crown” and Stephen may have been the first Christian martyr in the church. Stephen was a deacon in the 1st century church who was stoned to death for preaching the gospel. He also gave one of the greatest historical and apologetic sermons ever given in the Bible when he stood before the council. This man left a great mark in the church and in church history as we shall see.

The Need for Deacons

The need for deacons arose from the rapid growth of the church as we read in Acts 6:1-3 “Now in these days when the disciples were increasing in number, a complaint by the Hellenists arose against the Hebrews because their widows were being neglected in the daily distribution. And the twelve summoned the full number of the disciples and said, “It is not right that we should give up preaching the word of God to serve tables. Therefore, brothers, pick out from among you seven men of good repute, full of the Spirit and of wisdom, whom we will appoint to this duty.” The Hellenists were Greek-speaking Jews and they came to complain that only the Jewish widows were being taken care of so they decided to select seven men to serve as deacons (literally, “servants” or “waiters”) so “they chose Stephen, a man full of faith and of the Holy Spirit” (Acts 6:5) to be named among the seven. 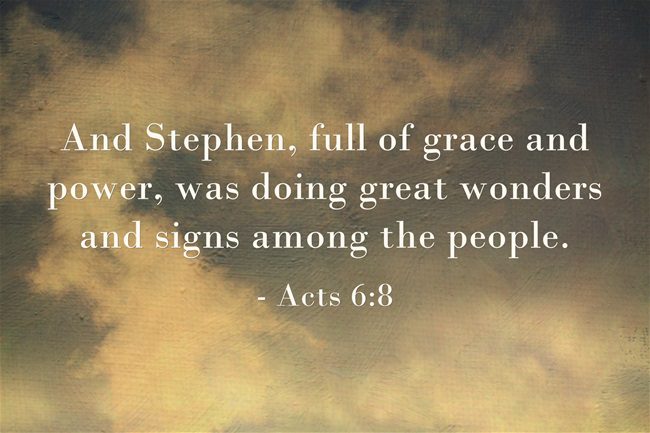 Why was Stephen arrested? It was because he was “full of grace and power, was doing great wonders and signs among the people” (Act 6:8). They could find no charges to bring up against Stephen so “they secretly instigated men who said, “We have heard him speak blasphemous words against Moses and God.” And they stirred up the people and the elders and the scribes, and they came upon him and seized him and brought him before the council, and they set up false witnesses” (Acts 6:11-13a).

When Stephen was brought before the council “the high priest said, “Are these things so” (Acts 7:1)? Stephen then began perhaps the lengthiest and most convincing of apologetic, historical defenses of the faith that may have ever been given (Acts 7:2-53). His argument was incontrovertible and the council was not capable of challenging it or proving it wrong. It mattered little to the council because in Stephen’s righteous indignation he said “You stiff-necked people, uncircumcised in heart and ears, you always resist the Holy Spirit. As your fathers did, so do you. Which of the prophets did your fathers not persecute? And they killed those who announced beforehand the coming of the Righteous One, whom you have now betrayed and murdered” (Acts 7:51-52).

When Stephen sharply rebuked the council members “they were enraged, and they ground their teeth at him. But he, full of the Holy Spirit, gazed into heaven and saw the glory of God, and Jesus standing at the right hand of God. And he said, “Behold, I see the heavens opened, and the Son of Man standing at the right hand of God.” But they cried out with a loud voice and stopped their ears and rushed together at him” (Acts 7:54-57). They had heard enough; “they cast him out of the city and stoned him. And the witnesses laid down their garments at the feet of a young man named Saul. And as they were stoning Stephen, he called out, “Lord Jesus, receive my spirit.” And falling to his knees he cried out with a loud voice, “Lord, do not hold this sin against them.” And when he had said this, he fell asleep” (Acts 7:58b-60). The wording where it says “he fell asleep” obviously meaning that he died but Jesus once said that God “is not God of the dead, but of the living, for all live to him” (Luke 20:38). We know that Stephen went immediately into the presence of the Lord as to be absent from the body is to be present with the Lord (2nd Cor 5:8). We might also notice that Stephen saw “Jesus standing at the right hand of God” as if to welcome him home, into the kingdom.

When Stephen was stoned, those who were stoning him “laid down their garments at the feet of a young man named Saul” so I have often wondered; was Saul, who later became Paul after his own conversion on the Damascus Road, a convert of Stephen? Did the stoning trouble Saul’s conscience? Did this plant the seed that what he was doing was wrong? Paul must have been an eye witness to Stephen’s testimony at the council and Saul must have heard those heart-piercing words “Lord, do not hold this sin against them” which were very similar to Jesus’ statement on the cross “Father, forgive them for they know not what they are doing” (Luke 23:34). We’ll only know the answer to that question when we see Paul in the kingdom. In the meantime, Stephen’s heroic defense of the faith is truly one of the most remarkable and bravest witnesses in the history of the church.

Stephen is a hero of the faith and is greatly admired, even today, for his bold, brave witness to the council, despite the threat of execution by stoning. I know that witnessing before others who are hostile to the truthfulness of the gospel is frightening and will very likely bring severe persecution to those who do it but as Paul said just before he died, “I have fought the good fight, I have finished the race, I have kept the faith. Henceforth there is laid up for me the crown of righteousness, which the Lord, the righteous judge, will award to me on that Day, and not only to me but also to all who have loved his appearing” (2nd Tim 4:7-8). That’s what Stephen’s name means; a crown and there is one waiting for you if you have repented and put your trust in Christ.

July 18, 2015
Who Was Onesimus In The Bible? A Character Study
Next Post