Who Was Benjamin In The Bible? A Character Study

Who was the Benjamin mentioned in the Bible? Why is it important for us to know?

The Birth of Benjamin

The Scriptures record when and under what circumstance that Benjamin was born “And when her labor was at its hardest, the midwife said to her, “Do not fear, for you have another son.” And as her soul was departing (for she was dying), she called his name Ben-oni; but his father called him Benjamin. So Rachel died, and she was buried on the way to Ephrath (that is, Bethlehem)” (Gen 35:17-19). What a sad occurrence this was because Jacob’s wife, Rachel, knew she was dying, as often happened in those days. That’s why she originally called Benjamin “Ben-oni” which means “son of my sorrow” but Jacob named the child Benjamin (son of the right hand). Jacob buried Rachel at Ephrath which is Bethlehem which come from the Hebrew words “Beyth Lechem” meaning “house of bread” where Jesus, the Bread of Life would be born, in a feeding trough no less, and also the birthplace of the future King David. When Israel’s other tribes broke away from the nation of Israel to become the Northern Kingdom (referred to as Israel), they would leave behind the tribe of Judah, the Levite priest, and the tribe of Benjamin so Benjamin was part of the separate nation called Judah from whom were referred to as the Jews. 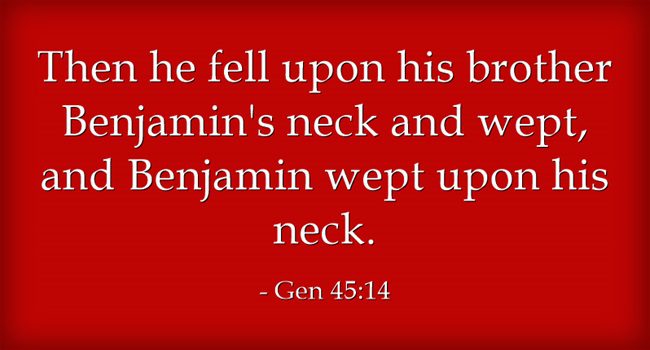 When drought happened and famine spread throughout the land, Jacob sent “ten of Joseph’s brothers went down to buy grain in Egypt. But Jacob did not send Benjamin, Joseph’s brother, with his brothers, for he feared that harm might happen to him. Thus the sons of Israel came to buy among the others who came, for the famine was in the land of Canaan” (Gen 42:3-5). Jacob didn’t want to lose Benjamin for he had thought that Joseph had been killed but his sons had lied to him and sold him into slavery but Joseph had actually ended up as second in command to Pharaoh.

When the brothers came to Egypt to buy grain, Joseph, his brothers didn’t recognize him so Joseph said “you shall not go from this place unless your youngest brother comes here. Send one of you, and let him bring your brother, while you remain confined, that your words may be tested, whether there is truth in you. Or else, by the life of Pharaoh, surely you are spies.” And he put them all together in custody for three days” (Gen 42:15-17) “and Jacob their father said to them, “You have bereaved me of my children: Joseph is no more, and Simeon is no more, and now you would take Benjamin. All this has come against me” (Gen 42:36). “Then their father Israel said to them, “If it must be so, then do this: take some of the choice fruits of the land in your bags, and carry a present down to the man, a little balm and a little honey, gum, myrrh, pistachio nuts, and almonds. Take double the money with you. Carry back with you the money that was returned in the mouth of your sacks. Perhaps it was an oversight. Take also your brother, and arise, go again to the man. May God Almighty grant you mercy before the man, and may he send back your other brother and Benjamin. And as for me, if I am bereaved of my children, I am bereaved” (Gen 43:11-14). Eventually, Joseph revealed who he was and said one of the most famous statements in the Bible “Do not fear, for am I in the place of God? As for you, you meant evil against me, but God meant it for good, to bring it about that many people should be kept alive, as they are today. So do not fear; I will provide for you and your little ones.” Thus he comforted them and spoke kindly to them” (Gen 50:19-21).

Benjamin, like Joseph, was one of the most obedient of all of the sons (and later tribes) of Israel (Jacob) and out of the tribe of Benjamin came perhaps the greatest Christian missionary ever, the Apostle Paul, who was “a Benjamite circumcised on the eighth day, of the people of Israel, of the tribe of Benjamin, a Hebrew of Hebrews; as to the law, a Pharisee” (Phil 3:5). Out of this same tribe of Judah (Judah, Levite, and Benjamin) came the promised Messiah, Jesus Christ.