Who Was Philip In The Bible? A Character Study

Who was Philip in the New Testament? What was special about this man?

There were many Philips in the New Testament as this was a very common name in Judea at the time. There was Philip the Apostle, Philip an adjunct of Caesarea, Philip the Tetrarch, Philip the Deacon and a few others but we will focus on the Philip that most people think of when they read the New Testament and that is the disciple and later, the Apostle Philip who is the dominant Philip mentioned in Scripture. The other Philip’s are not the focus of the gospel and of Jesus Christ’s mission for the apostles. By the way, Philip’s name is from the Greek “Philippos” meaning “love of horses” but part of the root of the name Philip is “philio” which means “brotherly love.”

Like the other disciples, Jesus sought out Philip. Jesus sought out and called Philip and then Philip went and told Nathaniel as we read in the Gospel of John where Jesus “found Philip and said to him, “Follow me. Philip was from Bethsaida, the city of Andrew and Peter” (John 1:43-44). After Jesus called Philip “Philip found Nathanael and said to him, “We have found him of whom Moses in the Law and also the prophets wrote, Jesus of Nazareth, the son of Joseph” (John 1:44). Nathaniel was skeptical, saying “Can anything good come out of Nazareth?” Philip said to him, “Come and see” (John 1:46) and before Nathaniel could say a word Jesus called Nathaniel by name which is why Nathaniel said “How do you know me?” Jesus answered him, “Before Philip called you, when you were under the fig tree, I saw you” (John 1:48). 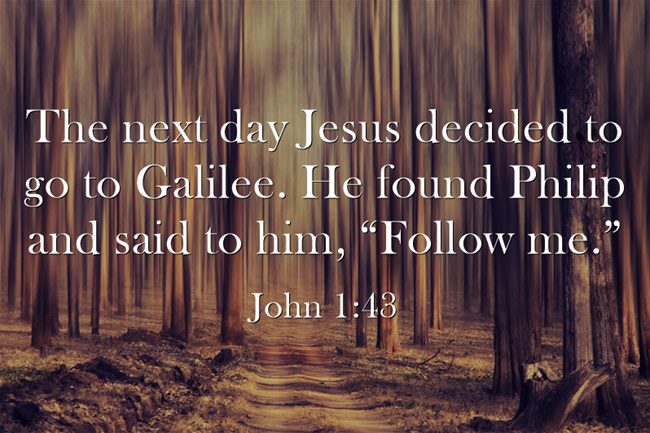 The Apostle Philip who was a disciple of Jesus was not the same Philip who was a deacon of the church. We know this because when the Hellenists widows were not being taken care of the “the disciples and said, “It is not right that we should give up preaching the word of God to serve tables” (Acts 6:2) saying “we will devote ourselves to prayer and to the ministry of the word” (Acts 6:4) so they chose Philip as one of the deacons (Acts 6:5).

Jesus seemed to test Philip once when there were over five thousand who had sat and listened to Jesus’ teaching when Jesus, “Lifting up his eyes, then, and seeing that a large crowd was coming toward him, Jesus said to Philip, “Where are we to buy bread, so that these people may eat?” He said this to test him, for he himself knew what he would do” (John 6:5-6). Jesus was testing Philip’s faith to see how he would respond to such a seemingly impossible situation even though Jesus already knew what He was going to do. Philip had no idea what to do and said “Two hundred denarii worth of bread would not be enough for each of them to get a little” (John 6:7) so Andrew was first to speak up and said “There is a boy here who has five barley loaves and two fish, but what are they for so many” (John 6:9). Of course, most of us know what happened. Jesus “took the loaves, and when he had given thanks, he distributed them to those who were seated. So also the fish, as much as they wanted. And when they had eaten their fill, he told his disciples, “Gather up the leftover fragments, that nothing may be lost.” So they gathered them up and filled twelve baskets with fragments from the five barley loaves left by those who had eaten” (John 6:11-13). Philip learned a powerful lesson here; of himself he could do nothing but with Christ, all things were possible.

From what we know, Philip, who became the sixth disciple of Jesus and was one of the twelve apostles, went to Carthage, Greece, Phrygia, and Syria where he preached and performed miracles. Church historian J.H. MacMahon recorded that Philip was impaled by iron hooks in his ankles and hung upside down to die.[1]  Precious little else is known about the process of how he was martyred but it is enough to know how he died for his faith in Christ and today is present with the Lord and was granted eternal life.