What Is The Difference Between Sin and Iniquity? A Bible Study

What Is The Difference Between Sin and Iniquity? A Bible Study July 23, 2015 Jack Wellman

Aren’t sin and iniquity the same thing? What’s the difference between these two?

Iniquity in the Hebrew is “`avon” and means “to bend, twist, distort” so iniquities are a bending, twisting, or distorting of the law or God’s Word to different degrees worthy of punishment (as we shall read later). Iniquity is certainly a violation of the right or duty that mankind is under obligation to do. As such, an iniquity can also be a wicked act and immoral conduct or practices that are harmful or offensive to society but especially to God. Exodus 34:17 mentions iniquity and guilt in the same sentence as God says He is “forgiving iniquity and transgression and sin” even adding transgression (which will be discussed in the later). God sometimes uses words like iniquity, transgression, sin, and trespasses to indicate the varying degrees of disobedience. Essentially, in the context within which this word is found, iniquity means “guilt that is worthy of punishment” due to the bending or twisting of the law of God (which sin is the transgression of the law).

When David lusted after Bathsheba and didn’t repent, his iniquity increased because the sin he committed was adultery with her. Even worse, in his continually living in iniquity, the level of worthiness of the punishment he deserved went higher and higher and especially after he conspired to have Bathsheba’s husband, Uriah, murdered. Then he was finally was murdered. The degrees of his disobedience grew and grew as David continued committing greater and greater iniquities so iniquity refers to a willful, knowing transgression of God’s law where one’s desires starts to dominate the person’s life like it did in David’s life. 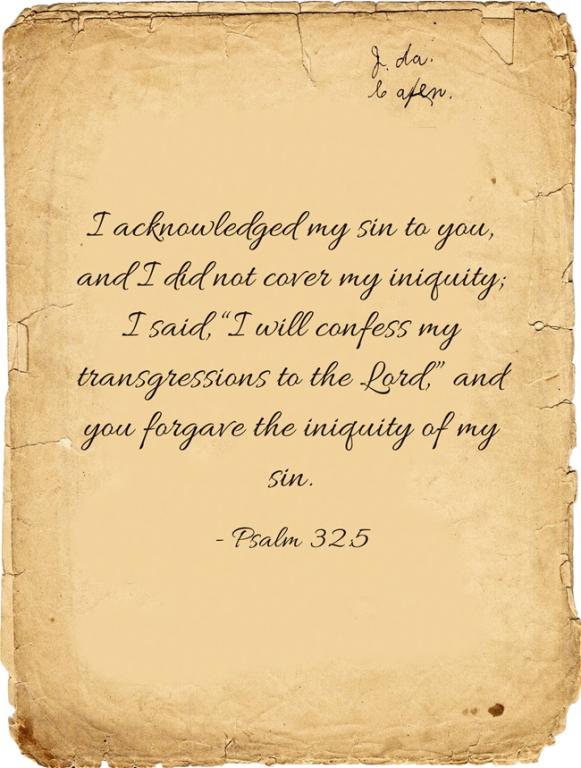 First John 3:4 gives perhaps the best definition of sin that there is in the Bible and it says “Everyone who makes a practice of sinning also practices lawlessness; sin is lawlessness.” So sin is the transgression of the law of God. Every iniquity is sin but some sins are not as worthy of punishment as others. For example, in the Old Testament, adultery and murder could bring the death penalty while stealing, having a lower degree of guilt worthy of not as severe a punishment, was still sin nonetheless. David wrote “Surely I was sinful at birth, sinful from the time my mother conceived me” (Psalm 51:4) but he had yet to commit iniquities at birth. Sin (“chatta’ah’”) means missing the mark. It’s like shooting an arrow at a target and you not only miss the bulls eye, you miss the target altogether. Your arrow falls far short just as we all fall far short of the glory of God (Rom 3:23).

Let’s return again to Psalm 32:5 to make clear the distinctions between sin, iniquity, and transgressions. David said he will confess (means agree with) his transgressions (his willful acts of disobedience) to the Lord, and God will forgive the iniquity (his bending, twisting, and distorting of the law that grew in the degrees worthy of greater punishment), of his sin (the transgressions of God’s law). All of these are sin; all are just being more specific to the degree of sin, to the degree of the act of the will, and to the degree of breaking God’s laws.

There are differences between sin and iniquity but both require a cleansing and that cleansing must come from the blood of the Lamb of God but here’s how that was accomplished for you: “Since, therefore, we have now been justified by his blood, much more shall we be saved by him from the wrath of God” (Rom 5:9) and it was “For our sake he made him to be sin who knew no sin, so that in him we might become the righteousness of God” (2nd Cor 5:21). That takes away all our transgressions, all our trespasses, all our iniquities…yes, all of our sins.

July 23, 2015
What Is The Difference Between Preaching And Teaching? A Bible Study
Next Post

Announcing...Living the King Jesus Gospel (A...
Crux Sola: Formed by Scripture to Live like Christ
Related posts from Christian Crier