What Does It Mean To Be The Salt Of The Earth?

Why does Jesus say we are to be the salt of the earth? What is the meaning of this statement?

No human life is possible without sodium chloride or salt and salt is the only trace mineral that is found in every cell in the human body. Without it, the organism would cease to function, therefore, salt is a biological necessity. For example salt contains iodine that prevents hypothyroidism but it also helps bodies retain and balance fluids and without salt, human life could not exist. Salt was once deemed so valuable that it was used as a currency and probably why the saying “He’s not worth his salt” made sense. In fact, the word “salary” comes from salt but when Jesus talked about the believers need to be salt, what did He mean by this. What are we to be “the salt of the earth?”

Jesus once talked about the relationship between believers and their being salt in the world. In Matthew 5:13 Jesus said “You are the salt of the earth; but if the salt loses its flavor, how shall it be seasoned? It is then good for nothing but to be thrown out and trampled underfoot by men.” Think of this. Salt is invaluable to human life and so Christians are to be an extension of Jesus Christ and we offer the message of this priceless gift of eternal life in Christ. Without Christ, eternal life in the kingdom is impossible (Acts 4:12). The problem is if we lose our testimony and our life is no different than the unbelieving world then we lose our saltiness and then it’s only good to be thrown out and trampled underfoot. Bland salt is useless but good salt seasons everything it touches. Salt enhances the flavor of food. Salt was used as a cleansing agent for wounds. Salt was and still is used as a preserving agent for foods and inhibits and prevents spoilage. Today, many medicines still contain salt compounds in them and the old home remedy of gargling with warm salt water can get rid of sore throats and can also help tooth aches by cleansing and killing the germs and bacterial when a tooth becomes infected. God once had Elijah throw salt in the water and “healed this water; from now on neither death nor miscarriage shall come from it” (2nd Kings 2:21). 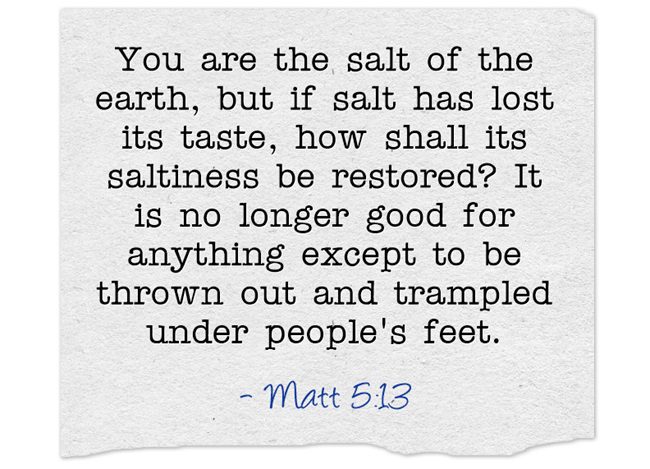 If salt loses its saltiness (Matt 5:13) then all it’s good for is to be thrown out and trampled upon. What did Jesus mean by this? If salt was ruined by exposure to moisture or the elements it was then mixed together with gypsum and this salt and gypsum mixture was then used to seal roofs in ancient times and since the roofs in the times when Jesus had His earthly ministry were like another room that the family could use as a family room or as a porch, they would be “trampled underfoot” (Matt 5:13). Sometimes, when Christians lose their testimony, the often become bitter and lose their saltiness. Interestingly, the word gypsum means “bitter” and the analogy is that when Christians become bitter, their saltiness is lost and they are not good for much more than repairing a leaky roof and only to be trodden under foot.

Another use for salt that was tainted was that it was used for roads in the Roman Empire. The worthless salt still had some value as it absorbed moisture and made the road that much harder which again, shows that worthless salt that loses its saltiness will be good only to be trampled underfoot. The analogy here is that when Christians become tainted by unrepentant sin and/or bitterness and their hearts become hardened, they lose their saltiness and are hard to be around. Many times in the Old Testament, the lands that were to be destroyed were often salted down so that the soils could not produce crops. This makes sense of Paul’s statement in Colossians 4:6 where he wrote “Let your speech always be gracious, seasoned with salt, so that you may know how you ought to answer each person.” Christians who lose their saltiness become bitter and hardened and are of little use anymore…except to be trampled underfoot. Remember that Lot’s wife looked back with regret after leaving Sodom “and she became a pillar of salt” (Gen 19:26b) perhaps because she was bitter about leaving her good life and luxuries.

The author of the Gospel of Mark writes “For everyone will be salted with fire. Salt is good, but if the salt has lost its saltiness, how will you make it salty again? Have salt in yourselves, and be at peace with one another” (Mark 9:49-50). Salt stings when we get it in the eyes and also when we get it on a cut or wound but salt that’s lost its saltiness cannot help us “be at peace with one another” but will in fact only serve as irritants. Salt was actually a vital part of the grain offerings in the Old Testament and allowed them to make peace with God.

You probably see why Jesus said that we are to be the salt of the earth…the salt to those who are perishing without Christ, enhancing everything we come in contact with, acting as a life-preserving agent by proclaiming the Author of Life, and to avoid the hardness, bitterness, and flavorlessness of losing our testimony.