What Is The Difference Between Clean and Unclean Animals In The Bible?

What Is The Difference Between Clean and Unclean Animals In The Bible? August 21, 2015 Jack Wellman

Is there a difference between clean and unclean animals? If so, what is the difference and should it matter today in the church?

In the Old Testament, there are lists of animals that were declared as unclean under the Mosaic Laws and these included pork, rabbit, camels, and animals with paws like dogs, cats, and lions but also what are called “creeping things” like mice, lizards, snakes, moles, and other such creatures. There are also lists of birds that were not suitable for consumption by the nation of Israel like vultures, owls, hawks, storks, ostriches, and bats. Most insects were deemed unclean by God with the exception being grasshoppers, locusts, and crickets. Some churches believe that these laws are still in effect even though this was not written to Christians but specifically to the nation of Israel as we read where God commands Moses and Aaron to “Speak to the people of Israel, saying, These are the living things that you may eat among all the animals that are on the earth” (Lev 11:2). Much of the reasons for these laws were because the other nations consumed these things and God did not want Israel to be like the other nations. God told Jeremiah “Learn not the way of the nations, nor be dismayed at the signs of the heavens because the nations are dismayed at them” (Jer 10:2) and to Moses, “You must not live according to the customs of the nations I am going to drive out before you. Because they did all these things, I abhorred them” (Lev 20:23).

The list of clean animals that God allowed Israel to eat were birds such as chicken, quail, turkeys, pheasant, all fish with scales and fins, and livestock like sheep, cattle, goats, deer, and of course lambs. These foods were allowed but all other unclean foods were strictly prohibited, but again, does this restrict what believers can or cannot eat today? No, these Old Testament, Mosaic dietary laws were given to Israel and not to Christians. The difference in what is allowed and what is forbidden in the Bible is always to whom it was written. The entire Bible is written for believers but not all Scripture is written to believers. Some scriptures are descriptive (describing events) while others are prescriptive (we are to obey them). We cannot try to enforce certain laws in the Bible that were prescribed only for Israel nor can we nullify certain laws that are universal and make them not applicable to us or others, such as the Ten Commandments. 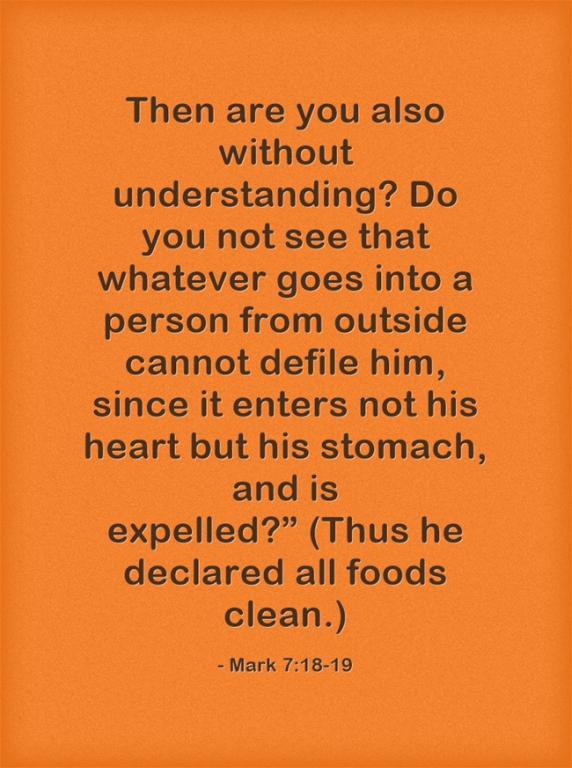 When God was trying to convince Peter to rise, kill, and eat unclean foods, Peter said that he had never eaten anything unclean in his life (Acts 10:11-14) God said “Do not call anything impure that God has made clean” (Acts 10:15) meaning that the gospel is now intended for the Gentiles too and not just for the Jewish people. In similar fashion, Jesus said “There is nothing outside a person that by going into him can defile him, but the things that come out of a person are what defile him” (Mark 7:15) and His disciples asked what this meant (Mark 7:17). Jesus replied, “Then are you also without understanding? Do you not see that whatever goes into a person from outside cannot defile him, since it enters not his heart but his stomach, and is expelled?” (Thus he declared all foods clean.) And he said, “What comes out of a person is what defiles him” (Mark 7:18-20). In other words, what we eat doesn’t defile a person…it is not what goes into the mouth but what comes out of the mouth that defiles a man and a woman. Besides, Jesus did away with the old Mosaic dietary laws when He went to Calvary. There was no need to avoid certain foods anymore since these dietary laws were written specifically to Israel just like the old animal sacrificial system was also voided due to Jesus’ one-for-all sacrifice of Himself on the cross.

We cannot judge other people for what they eat and for what they don’t eat. Paul addressed this in 2nd Corinthians 2:16 writing “let no one pass judgment on you in questions of food and drink, or with regard to a festival or a new moon or a Sabbath” and so “The one who eats everything must not treat with contempt the one who does not, and the one who does not eat everything must not judge the one who does, for God has accepted them” (Rom 14:3) and yet some churches still teach abstinence of certain foods and judge others outside of their church as being unclean if they eat certain foods. They are unfairly judging others by what they eat, even though Jesus clearly declared all foods clean. If Jesus declared all foods clean, do we need any other authority to tell us differently?

Today we have liberty to eat what we desire and our diets are not restricted by what God commanded the nation of Israel. We cannot pick and choose what we believe out of the Bible. It is not a buffet of what we want to believe; I’ll have a little of that and some of this but none of that. We must look at the context, to what verses were written to whom, and not judge others for what the Bible clearly shows they have liberty in.

August 21, 2015
What Is The Difference Between A Birthright and A Blessing In The Bible?
Next Post

August 21, 2015 What Is A Concubine? Why Was This Allowed In The Old Testament?
Recent Comments
2 Comments | Leave a Comment
Browse Our Archives
get the latest from
Evangelical
Sign up for our newsletter
POPULAR AT PATHEOS Evangelical
1