What Is The Leviathan In The Bible?

What was the Leviathan in the Bible? What could this creature have been? How does the Hebrew language help us find out?

In Job 41:1 God asks Job a rhetorical question, “Can you draw out Leviathan with a fishhook or press down his tongue with a cord?” The obvious answer is no, it can’t be done. God was answering Job who had been questioning God so God came back and asked Job a lot of questions which basically says “Job, who do you think you are? I am the Creator! How could you even question me?” God begins to humble Job by reminding him of the creation and to put himself into the right perspective of the Creator and His creation compared to that which He created (Job).

The Leviathan in the Book of Job

What are the leviathans that are mentioned in the Book of Job and in the psalms as well as the Book of Isaiah? The Hebrew word for leviathan is “livyathan” so it’s not really a translation but a transliteration. To the author, the leviathan (livyathan) is apparently a sea monster or dragon, perhaps the extinct dinosaur, plesiosaurus but the exact meaning is unknown. This “leviathan,” whatever it was, is “so fierce that [who] dares to stir him up” (Job 41:10), who could possibly “fill his skin with harpoons or his head with fishing spears” (Job 41:7), or can “put a rope in his nose or pierce his jaw with a hook” (Job 41:2), and which “counts iron as straw, and bronze as rotten wood” (Job 41:27). This is not a whale or a sea serpent (sea snake) but something much greater. What it is exactly is insignificant next to what and Who God is and that is the whole point of this chapter. God reigns supreme above and over His creation, no matter how formidable it looks. 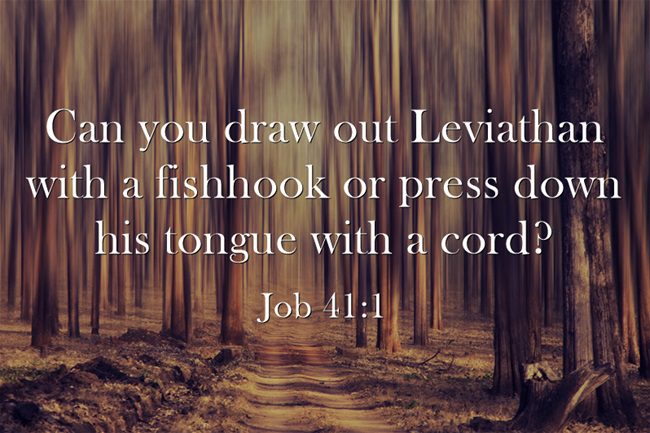 The Leviathan in the Book of Isaiah

The leviathan is also mentioned in the Book of Isaiah where he writes “In that day the Lord with his hard and great and strong sword will punish Leviathan the fleeing serpent, Leviathan the twisting serpent, and he will slay the dragon that is in the sea” (Isaiah 27:1). The word for “Leviathan” is the same as it is in the Book of Job, “livyathan” and means a sea monster or dragon. The Leviathan is described as “the twisting serpent” like a “dragon.” The Hebrew word for serpent is “nachash” and actually refers to a snake but then there’s the Hebrew word “tanniyn” and this means “sea dragon.” Is his is a physical description of the leviathan or a description of the leviathan’s attributes…or both? The leviathan resembles a twisting serpent but is also like a dragon. In the context of Isaiah 27 this reference may refer to the redemption of Israel as this is what the whole chapter is about. The reference may be about that old serpent, the Devil, which is what he is referred to elsewhere in the Bible (Rev 12:9) and that God will take hold of “the dragon” (Rev 20:2). To state that Isaiah is talking about a physical monster-like creature of the sea might be taking this one verse too far (in Isaiah 27:1).

The Leviathan in the Book of Psalms

In Psalm 74:14 it says “You crushed the heads of Leviathan; you gave him as food for the creatures of the wilderness.” Who is able to crush all resistance to Him? The context of this chapter is about God protecting and avenging Mount Zion. The Leviathan seems to portray the enemy and the “creatures” are actually people or a nation as the Hebrew word for creatures is “`am” meaning a nation or a people. This word (`am) is even embedded within Abraham’s name as He was known as the father of many nations (Gen 17:5). Another psalm also mentioned the leviathan in Psalm 104:26 where it says “There go the ships, and Leviathan, which you formed to play in it” almost seeming to indicate that the psalmist could still observe leviathans at play. The word for “play” is “sachaq” and means “to play, to laugh,” or “to mock” so maybe this represents the Devil mocking God and toying around with His people, Israel (Mount Zion). Either way, these two verses in the Book of Psalms doesn’t seem to specifically be about a creature on the earth but an invisible foe and God’s ability to protect His chosen people

The point of the verses referring to the leviathan is always to make the point that God’s creatures, no matter how big they are to us, is nothing to Him. He should receive all the glory for the created thing has nothing to boast in except its creator and in this case, THE Creator.

August 22, 2015
What Is The Difference Between Joy And Happiness In The Bible?
Next Post

August 22, 2015 What Is The Apocalypse In The Bible?
Recent Comments
11 Comments | Leave a Comment
"Jack, I was reading the comments here, and I realize the post is over a ..."
rtgmath Why the Poor Are Important To ..."
"A very complete discussion of the word "woe", and one that we carefully avoid, because ..."
David Stockwell What Does Woe Mean? A Biblical ..."
"Helpful article especially that just showing up to become available for service.The article fleshes out ..."
the old scribe 4 Characteristics of a Good and ..."
"This article is a prime example of why I will never become an Evangelical. Everything, ..."
Viator16 4 Characteristics of a Good and ..."
Browse Our Archives
Follow Us!