What Was The Tree Of Life In The Bible?

What was the Tree of Life? Why was it called this? What does it have to do with believers today?

Life in the Garden

Some phycologist’s believe that given the right environment, people would do so much better in life but what was better than living in the garden? It was a paradise to be sure. There was no need for hard labor and there was no need to work for food as the fruits available in the Garden provided everything that they would ever need as there were “plants yielding seed according to their own kinds, and trees bearing fruit in which is their seed, each according to its kind. And God saw that it was good” (Gen 1:12). God said “Behold, I have given you every plant yielding seed that is on the face of all the earth, and every tree with seed in its fruit. You shall have them for food. And to every beast of the earth and to every bird of the heavens and to everything that creeps on the earth, everything that has the breath of life, I have given every green plant for food.” And it was so” (Gen 1:29-30). Life was good for Adam and Eve. They had everything they needed…but as we shall see, they didn’t have everything they wanted and that would create a huge problem for them and for us.

God was the first gardener as “the Lord God planted a garden in Eden, in the east, and there he put the man whom he had formed” (Gen 2:8) and so “out of the ground the Lord God made to spring up every tree that is pleasant to the sight and good for food. The tree of life was in the midst of the garden, and the tree of the knowledge of good and evil” (Gen 2:9). The Lord took Adam and placed him in the garden to keep it and work it (Gen 2:15) so we see that work is not something that came after the fall and was a curse but was required before the fall so God looked at work too and said “that it was good.” God gave Adam all that he would ever need but He warned him by saying “you may surely eat of every tree of the garden, but of the tree of the knowledge of good and evil you shall not eat, for in the day that you eat of it you shall surely die” (Gen 2:16-17). Adam wouldn’t need to eat anything else because he had everything he would ever need from “every tree of the garden” but the “tree of the knowledge of good and evil” was forbidden because it would bring about death, indicating that at that time Adam had eternal life and especially since he had never sinned…yet! 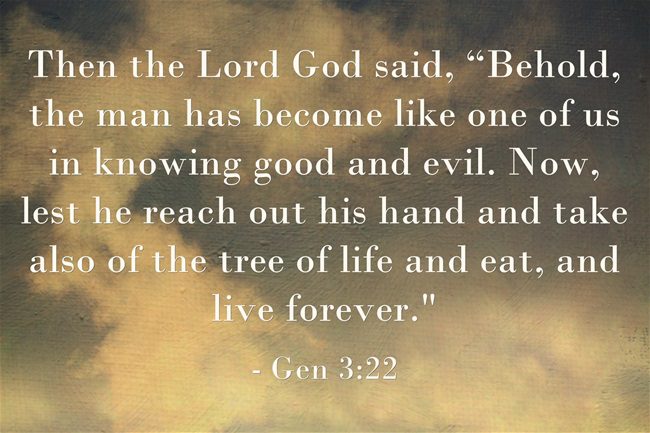 When all seemed to be going so well for Adam and Eve in the Garden, the serpent came to tempt and deceive Eve. First of all, the enemy questioned God’s Word saying “Did God actually say, ‘You shall not eat of any tree in the garden’” (Gen 3:1b). No, God didn’t say you can’t “eat of any tree in the garden.” Eve corrected the serpent by saying “We may eat of the fruit of the trees in the garden, but God said, ‘You shall not eat of the fruit of the tree that is in the midst of the garden, neither shall you touch it, lest you die” (Gen 3:2-4a). Now it was Eve’s turn to distort the truth. God never said that they couldn’t even touch it but said that they couldn’t take of it and eat. Now the serpent got Eve to distort God’s original instructions. The serpent hissed at this saying, “You will not surely die. For God knows that when you eat of it your eyes will be opened, and you will be like God, knowing good and evil” (Gen 3:4b-5). There is yet another lie from the “father of lies” (John 8:44). Finally, Eve took it and gave some to her husband, Adam, and suddenly, both of their eyes were opened (Gen 3:6-8).

After Adam and Eve had taken of the tree of the knowledge of good and evil, God said “Behold, the man has become like one of us in knowing good and evil. Now, lest he reach out his hand and take also of the tree of life and eat, and live forever—” therefore the Lord God sent him out from the garden of Eden to work the ground from which he was taken. He drove out the man, and at the east of the garden of Eden he placed the cherubim and a flaming sword that turned every way to guard the way to the tree of life” (Gen 3:22-24). It wasn’t necessarily the fruit that was bad…it was their disobedience to God. There was nothing in the fruit that brought death…it was the sin that brought eventual death. Both of them had lost out on their chance of eternal life and since they had already sinned, God withdrew the opportunity for eternal life in baring access to the tree of life. There is no indication of Adam and Eve repenting because they only made excuses for their disobedience; Adam blamed his wife, Eve blamed the serpent, and the serpent didn’t have a leg to stand on (sorry). The tree of life was now strictly off limits but there would come another opportunity later in Jesus Christ. He hung on a tree and became a curse for us, lifting the curse of death from sin, so that we might have eternal life. This curse was lifted where there was another garden, “in the place where he was crucified there was a garden, and in the garden a new tomb in which no one had yet been laid” (John 19:41). He was previously arrested in a garden too…the Garden of Gethsemane. In one garden, mankind fell, in another garden, mankind is restored.

If not for Jesus’ substitutionary death on the cross, the curse would still be on mankind and we’d all still be separated from God by our sins (Isaiah 59:2) but Jesus’ death reconciled us back to God, ending the separation and bringing us into fellowship with the Father. He is the truth, the life, and the way, (John 14:6), more than any tree of life in a garden ever could. Jesus died on a tree to bring us a tree of life that never withers and never shall fade.

August 24, 2015 What Was The Good News In The Bible?
Recent Comments
0 | Leave a Comment
Browse Our Archives
get the latest from
Evangelical
Sign up for our newsletter
POPULAR AT PATHEOS Evangelical
1