What Are Principalities And Powers That Are Talked About In The Bible?

What are the principalities and powers of the air that Paul wrote about? Do Christians have to be concerned about these things today?

Principalities in biblical times was known as a state ruled by a prince, governor or satrap and was usually a relatively small state or a state that falls within a larger state or nation such as in the Roman Empire. It can be that which holds or has held rule over a population that is either republics or principalities. Taken as it is, a principality can have dominion within the confines of a larger dominion or rule.

Powers are those that hold power within a kingdom, a principality, or even an empire. This could be wielded by kings or emperors, like King Nebuchadnezzar held absolute power over the kingdom of Babylon. For example, a local power means to have the ability or capacity to act or do something effectively exerting control, influence, creating and enforcing laws or authority over a people or nation. 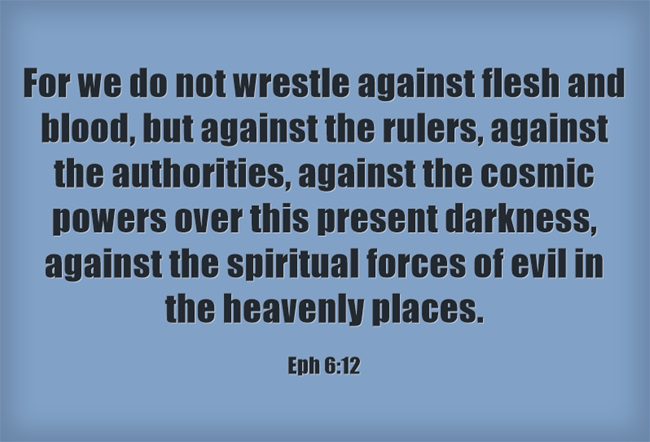 The Prince of Darkness

Satan is the natural enemy of the Christian and he doesn’t have to do much with the world as they are already held in his sway without even knowing it. All the unsaved world is doing is rearranging deck chairs on the Titanic. For the lost or unsaved, Satan is “the god of this world has blinded the minds of the unbelievers, to keep them from seeing the light of the gospel of the glory of Christ, who is the image of God” (2nd Cor 4:4) so they don’t even see that there a huge problem coming (Rev 20:12-15). Paul’s received his mission directly from Jesus where our Lord said to him that He was “delivering you from your people and from the Gentiles—to whom I am sending you to open their eyes, so that they may turn from darkness to light and from the power of Satan to God, that they may receive forgiveness of sins and a place among those who are sanctified by faith in me’” (Acts 26:17-18).

The god of this World

Today, Satan wants the world to believe he doesn’t exist so he can wreak havoc on a disbelieving world but we should all remember that at one time you and I “used to live when you followed the ways of this world and of the ruler of the kingdom of the air, the spirit who is now at work in those who are disobedient” (Eph 2:2), however the “god of this world” and his minions does have us in his scope so we had better understand that “we do not wrestle against flesh and blood, but against the rulers, against the authorities, against the cosmic powers over this present darkness, against the spiritual forces of evil in the heavenly places” (Eph 6:12).

As Paul wrote, we’re not really battling a visible enemy but an invisible one (Eph 6:12). It might be easier if we were wrestling against flesh and blood because at least we could see them but Paul was still “persuaded that neither death nor life, nor angels nor principalities nor powers, nor things present nor things to come” (Rom 8:38). Why should we not worry about these powers and principalities of evil? Because Christ has “disarmed principalities and powers, He made a public spectacle of them, triumphing over them in it” (Col 2:15).We have no fear of any prince of darkness, no power of evil, and not only that, we have no fear of death since we’d be immediately with the Lord at death, no fear of angels (particularly fallen ones), no fear of principalities because Jesus has disarmed them, no fear of things to come, things in the past, or things present. In fact no “height nor depth, nor any other created thing, shall be able to separate us from the love of God which is in Christ Jesus our Lord” (Rom 8:39).

Satan has his own ministers and apparently, even his own churches and it is “no wonder, for Satan himself masquerades as an angel of light” (2nd Cor 11:14) but Jesus Christ is “far above all rule and authority, power and dominion, and every name that is invoked, not only in the present age but also in the one to come” (Eph 1:21) “For he has rescued us from the dominion of darkness and brought us into the kingdom of the Son he loves” (Col 1:13). That should give us a sense that we too need to be about our Father’s business of rescuing the perishing because at one time, there went were.

August 26, 2015 Is There Really Such A Thing As An Angel Of Death?
Recent Comments
3 Comments | Leave a Comment
"What does "humility" have to do with anything? Couldn't care less what any religious superstitious ..."
pud A Sunday School Lesson On Joy
"So noble of you to point that out. Can you do a word search on ..."
Darth Charming A Sunday School Lesson On Joy
"Well said Mr. Stockwell. Thank you sir."
Jack Wellman What Does Woe Mean? A Biblical ..."
"So that you might not do unto Christ (Matt 25:40). What part of serving in ..."
Jack Wellman 4 Characteristics of a Good and ..."
Browse Our Archives
Follow Us!

A Sign of the Times: When...
The Chorus In The Chaos
Related posts from Christian Crier