Is Astrology Harmful To Christians?

The Origins of Astrology

Some follow astrology, some live by their horoscopes or the zodiac and some even read tarot cards to determine what the future holds. There are many who even connect with psychics but are these condemned by God? The origin of the zodiac probably comes from Mesopotamia and the Babylonians from around 3,000 BC and was later influenced by Hellenistic culture. Astrology is comprised of a system of divination based on the premise that there is a relationship between astronomical phenomena and events in the human world, as if one could actually influence the other. How they actually influence the other in a tangible way has never been fully explained and has not been scientifically validated. In other words, there is no way to prove these claims or predictions and what the future really holds. The Bible clearly states in several places that man “does not know what is to be, for who can tell him how it will be” (Eccl 8:7) and “No one knows what is coming– who can tell someone else what will happen after them” (Eccl 10:14). Only God “calls into existence the things that do not exist” (Rom 4:17).

The Bible on Divination

The Bible clearly condemns those who try to predict the future by divination, including those who write horoscopes or use charts to predict their personality. How someone or something can determine what type of person you are and what’s going to happen to you is beyond explanation. When Judah fell into idolatry and pagan practices God declared “You art wearied in the multitude of your counsels. Let now the astrologers, the stargazers, the monthly prognosticators, stand up, and save you from these things that shall come upon you” (Isaiah 47:13a). Since Judah was about to be destroyed and taken into captivity by the Babylonians, God taunts Judah and their diviners by asking them “let them stand forth and save you, those who divide the heavens, who gaze at the stars…they cannot deliver themselves from the power of the flame” (Isaiah 47:13b-14). If we knew the future then couldn’t we altar it? If we knew the future, wouldn’t we end up doing more harm than good? It doesn’t really matter because we can’t even know what tomorrow may bring since “you do not even know what will happen tomorrow” (James 4:14), besides, “The secret things belong to the Lord our God, but the things that are revealed belong to us and to our children forever, that we may do all the words of this law” (Duet 29:29). 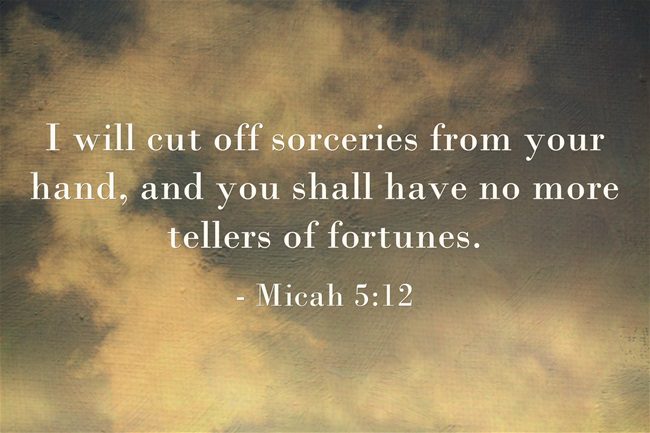 Deuteronomy 18:10-12 clearly shows that trying to divine the future is condemned by God as He says, “There shall not be found among you anyone who burns his son or his daughter as an offering, anyone who practices divination or tells fortunes or interprets omens, or a sorcerer or a charmer or a medium or a necromancer (spiritist) or one who inquires of the dead, for whoever does these things is an abomination to the Lord.” What will happen to all who practice such things? Micah 5:12 states that God “will cut off sorceries from your hand, and you shall have no more tellers of fortunes.” How did it turn out for King Saul when he consulted a medium? First Chronicles 10:13-14 records that Saul “broke faith with the Lord in that he did not keep the command of the Lord, and also consulted a medium, seeking guidance. He did not seek guidance from the Lord. Therefore the Lord put him to death and turned the kingdom over to David the son of Jesse.”

Tarot card readers make outrageous claims by trying to understanding the secrets within your past lives where you can get closure and start planning the life you’ve always dreamed of explaining that your Karma Oracle explains who you were, who has had the biggest impact on you, your karmic inheritance (special gifts), and what you need to do to rid yourself of negative energy and get the life you really want. Since they claim to know your future without even knowing you, then when they are sued for false claims and lose in court and have to close their doors, why didn’t they see their own end coming?

The astrological readings or the horoscopes are as vague and general as to border on the ridiculous and they could actually apply to anyone! One example of one that I read said “You need to make sure that you are appreciating the rewards of your labor today — slow down and relax for a while. You’ll experience a lot of satisfaction, and it is going to feel awfully good to you!” Tell me, who wouldn’t that apply too? Who among us wouldn’t experience a lot of satisfaction if we slowed down and relaxed? You might as well try to make a reading out of your morning toast! They are so non-specific that if you get out of bed, you’ve probably already fulfilled one of your predictions.

I urge you to stop reading these things and making your life choices based upon them. The horoscope is really a “horror-scope” because that’s the future for all who use these. Let me predict your future. I can read your future before it even gets here and that is if you fail to repent and trust in Christ, your future has already been written (Rev 21:8). I know what will happen to you before it even happens if you disbelieve in Christ (Rev 20:12-15) but this is not my prediction based upon reading palms, physic readings, tarot cards, horoscopes, or astrology but God’s Word as He has revealed these things to us in His written Word and it cannot be changed or altered. You hold your eternal destiny in your own hands and Jesus tells you exactly what that is in John 3:36 “Whoever believes in the Son has eternal life; whoever does not obey the Son shall not see life, but the wrath of God remains on him.”

September 2, 2015
Who Is King Ahab From The Bible?
Next Post

September 12, 2015 Who Are The Two Witnesses In The Book Of Revelation?
Recent Comments
8 Comments | Leave a Comment
Browse Our Archives
get the latest from
Evangelical
Sign up for our newsletter
POPULAR AT PATHEOS Evangelical
1