What Does The Bible Say About Race Wars?

What Does The Bible Say About Race Wars? September 16, 2015 Jack Wellman

Does the Bible talk about the dangers of race wars? If not, is there general teaching that can address this topic?

Wars and Rumors of Wars

Jesus was once asked by His disciples about what the signs of His second coming would be. He said “you will hear of wars and rumors of wars. See that you are not alarmed, for this must take place, but the end is not yet” (Matt 24:6) but “when you hear of wars and rumors of wars, do not be alarmed” (Mark 13:7). Jesus was even more specific about this in Luke saying “when you hear of wars and tumults, do not be terrified, for these things must first take place, but the end will not be at once” (Luke 21:9). This violence will apparently escalate in the end times where “Nation will rise against nation, and kingdom against kingdom” (Luke 21:10). Luke used the words “wars and tumults” so what is “tumult?” The dictionary defines a tumult as a state of noisy, activity where numbers of people are shouting and yelling and everyone’s acting confused so Jesus was saying that in the end times we’ll hear about wars and noisy states of confusion and this doesn’t sound peaceful. I have never experienced a calm, quite tumult. 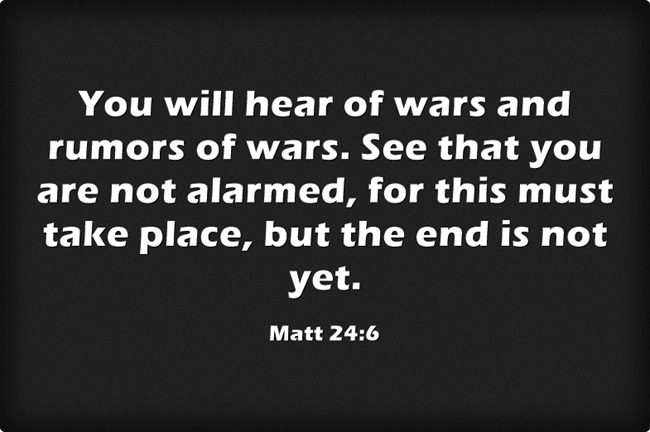 At war with God

God resists the proud but will give His grace only to those who are humble, which is what James writes in 4:6. The word for opposes or resists in the Greek is a word meaning “to range in battle with” so James 4:6 could actually read “God is at war with the proud, but gives grace to the humble.” Today, much of humanity is at war with God and that will not turn out well at all (Rev 21:8). The psalmist declares that “God is a righteous judge, and a God who feels indignation every day” (Psalm 7:11) and “If a man does not repent, God will whet his sword; he has bent and readied his bow” (Psalm 7:12). If you want to read how God feels about the unrepentant, read Psalm 7 to be sure. Today, this world is at enmity or in hostility with God or as James writes “Do you not know that friendship with the world is enmity with God? Therefore whoever wishes to be a friend of the world makes himself an enemy of God” (James 4:4). The Apostle John writes “Do not love the world or anything in the world. If anyone loves the world, love for the Father is not in them” (1st John 2:5).

When Jesus said that nations shall rise against nations and kingdom against kingdom, could He have foreseen the race wars that have erupted in parts of the world today? These “nations” and “kingdoms” might be a people group or a nation that is living within another nation. There is nothing that God has not foreseen, even those things which have not yet come to pass. Even before they happen, God is aware of it. The violence that is escalating these days, and sadly against people of different color, does not take God by surprise. It is another mark of the last days…the days just prior to Christ’s return. Paul warned Timothy “that in the last days there will come times of difficulty. For people will be lovers of self, lovers of money, proud, arrogant, abusive, disobedient to their parents, ungrateful, unholy, heartless, unappeasable, slanderous, without self-control, brutal, not loving good, treacherous, reckless, swollen with conceit, lovers of pleasure rather than lovers of God, having the appearance of godliness, but denying its power. Avoid such people” (2nd Tim 3:1-5) and “because lawlessness will be increased, the love of many will grow cold” (Matt 24:12). James addresses the source of these wars in writing “What causes quarrels and what causes fights among you? Is it not this, that your passions are at war within you” (James 4:1) because “You desire and do not have, so you murder. You covet and cannot obtain, so you fight and quarrel. You do not have, because you do not ask” (James 4:2). Wars have always come for the purpose of financial gain but race wars may be caused by the Devil himself who would love nothing more than to bring anarchy to this and all nations through rioting, looting, and murder.

By all accounts, violence in the world is increasing at a faster rate than it can be contained. Race wars threaten this nation but other nations are not immune. All sorts of violence; rich verses poor, black verses white, have-nots verses haves. It is only going to grow worse the closer the Lord gets to His return but then all violence will end but it will take the all-mighty, omnipotent hand of God to stop it…but stop it He will; once and for all.

September 15, 2015
What Does The Bible Say About Self Defense?
Next Post