Why Do Christians Argue and Fight With Other Christians?

Why do Christians have to argue and fight with one another since they worship the same God and read the same Bible?

The breeding of Quarrels

All too often, Christians get into debates about what Scriptures mean to them. They sometime wrangle over verses that they think mean this while someone else believes it means something totally different. Paul warned Timothy about such things in the church by writing “Have nothing to do with foolish, ignorant controversies; you know that they breed quarrels” (2nd Tim 2:23) because “the Lord’s servant must not be quarrelsome but must be kind to everyone, able to teach, not resentful” (2nd Tim 2:24). If someone else may have differences of belief on Scriptures and they are not the main, essential beliefs, its best to leave it alone. We are to “Do everything in love” (1st Cor 16:14). The German Lutheran theologian of the early seventeenth century, Rupertus Meldenius, famously wrote on a Bible tract, “In Essentials, unity. In non-essentials, liberty. In all things, love” even though it has been falsely attributed to Saint Augustine. If we kept this in mind, we’d avoid many wars of words.

Wrong use of the Sword

Paul, in warning the church about spiritual attacks from the enemy, he says we are to take up the “sword of the Spirit, which is the word of God” (Eph 6:17b). The sword is often symbolic of the Word of God as in Hebrews 4:12 where it says “the word of God is living and active, sharper than any two-edged sword, piercing to the division of soul and of spirit, of joints and of marrow, and discerning the thoughts and intentions of the heart” (Heb 4:12). The sword of the Spirit, the Word of God, is intended for our own good and is the only offensive weapon in the armor of God (Eph 6:11-17) but nowhere in Scripture is the Word of God to be used as an offensive weapon against other Christians but all too often, Christians use the sword of the Word against each other. When we do so, we’re using it against the wrong persons. 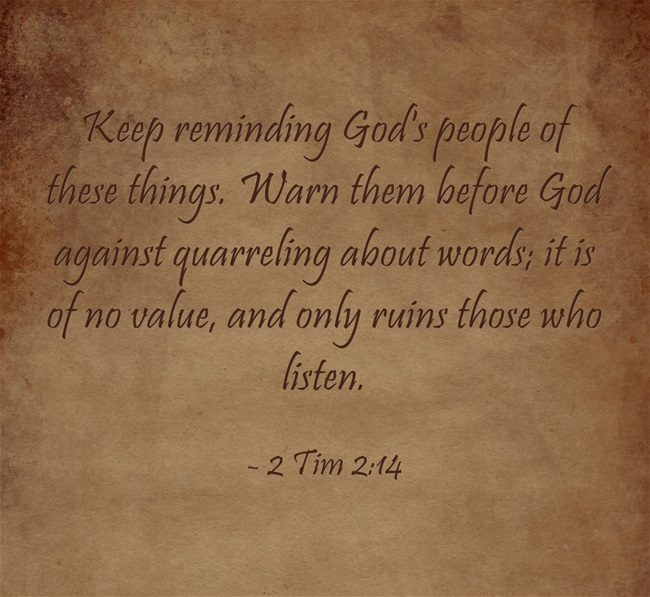 I heard about an analogy once where the bride came down the aisle at the wedding but she had a black eye, her lip was swollen, part of her dress was torn, and she was limping. Someone then said, “Looks like the bride of Christ has been fighting again.” The church is sometimes referred to as the bride of Christ (Rev 21:9-11) so how grieved must Christ be when He sees us fighting amongst ourselves just to prove what we believe to be true. Is it not better to allow others to believe differently from us in non-essentials and in so-called “grey areas” not make it a battle ground? Where the Bible is silent, shouldn’t we be silent too? This is exactly why Paul told Timothy to “Keep reminding God’s people of these things. Warn them before God against quarreling about words; it is of no value, and only ruins those who listen” (2nd Tim 2:14). Why would Paul say “keep reminding God’s people of these things?” The church obviously had issues with members wrangling over words as Paul told Titus to “avoid foolish controversies and genealogies and arguments and quarrels about the law, because these are unprofitable and useless” (Titus 3:9).

Not too long ago, I decided to just cancel our Wednesday night Bible study because two men drove their tent pegs of belief into different ground. They were not about to give even an inch. The problem to me was clear; pride! Paul knew this tendency too when he wrote that “we know that “all of us possess knowledge.” This “knowledge” puffs up, but love builds up” (1st Cor 8:1). One man got up to leave and one of the ladies at the Bible study became so upset, she started to cry. One man had a master’s degree while the other was working on completing an associates’ but both acted like they could not be wrong. Knowledge tends to make a person prideful and when two prideful individuals clash, there is war; a war of words. They begin to hurl scriptures at one another like canon volleys. They were sword fighting but the swords they were using was the Word of God. They were using them against one another instead of against the enemy.

If we can agree to disagree, we might not be so disagreeable. We should agree on the essentials (Rom 10:9-13, Acts 4:12, etc.), have liberty in non-essentials (like food and drink), but in all of these things, love must be the underlying foundation so “Let us therefore make every effort to do what leads to peace and to mutual edification” (Rom 14:19).

September 22, 2015
What Is A Born Again Christian?
Next Post

September 23, 2015 How An Affair Can Ruin Your Life?
Recent Comments
4 Comments | Leave a Comment
"Well I hope that your relationship with your husband works out for you both. Compassion, ..."
John Arthur 5 Prayers For A Cheating Spouse
"Hi Jack -- I would like to make an additional point... First, the Scripture will ..."
tovlogos Why Was Jesus Baptized Since He ..."
"relationships problems is one of the biggest and widest problems in most relationships all over ..."
Mila Hunter 5 Prayers For A Cheating Spouse
"How do you know that he isn't mentally ill? Has he been checked by a ..."
John Arthur How Do You Know When It’s ..."
Browse Our Archives
Follow Us!

The New Wright-Bird Intro-- Part Four
The New Introduction by Wright and Bird comes with a Workbook. This...
view all Evangelical blogs
What Are Your Thoughts?leave a comment
Copyright 2008-2020, Patheos. All rights reserved.