Sinning in the Heart 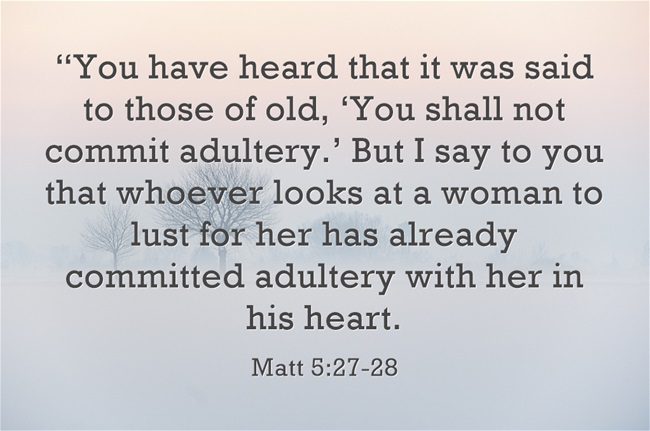 Lusting in the Heart

We have already read that Jesus equated the desire to have sex with someone who is not our spouse as adultery of the heart but this doesn’t mean that the physical act is not worse. When we commit adultery or fornication, we are actually joining ourselves with that person as Paul writes “do you not know that he who is joined to a prostitute becomes one body with her? For, as it is written, “The two will become one flesh.” But he who is joined to the Lord becomes one spirit with him. Flee from sexual immorality. Every other sin a person commits is outside the body, but the sexually immoral person sins against his own body” (1 Cor 6:16-18). Paul puts it this way: “Do you not know that your bodies are members of Christ? Shall I then take the members of Christ and make them members of a prostitute? Never” (1 Cor 6:15)! This is why we should “Flee from sexual immorality.”

I love what Job said in Job 31:1 “I have made a covenant with my eyes; how then could I gaze at a virgin?” In other words, when Job even saw a woman who was not his spouse, he would immediately look away. The same principle is that when I watch TV, which is not all that often, and I see an image on a commercial or a promo of a show that is sexually explicit, I either turn the channel or I turn the TV off. I won’t sit there and stare at it until it’s over. This allows me to become tempted and immoral thoughts can easily creep into my mind. Once again, Paul reminds us that “there must not be even a hint of sexual immorality, or of any kind of impurity” (Eph 5:3) and so “whatever you do, do it all for the glory of God” (1st Cor 10:31). The fact is “Everything that does not come from faith is sin” (Rom 14:23). You and I must realize that our “body is a temple of the Holy Spirit, who is in you, whom you have received from God? You are not your own; you were bought at a price. Therefore honor God with your body” (1 Cor 6:19-20).