Here is as nearly comprehensive of a list of the prophets in the Bible.

You probably know most of the prophets in the Bible like Isaiah, Ezekiel, Jeremiah, and many others but there were a lot more prophets than you might first think but first of all, what does the word prophet mean? It doesn’t actually specifically mean predicting the future but it comes from the Hebrew word “nabiy’” and means “spokesman” or “speaker.” In the Greek the word for prophet is “prophētēs” and means several things; it is a “forth” (pro) “telling” or teaching (phētēs) and an interpreter of the oracles of God and when God’s Spirit solemnly declares to men what he has received by inspiration, especially concerning future events and he either speaks them or writes them down. There are Major Prophets and Minor Prophets but they are not major and minor due to their significance but this refers only to the size of each book.

Abel may have been the very first prophet and that’s how Jesus refers to him by saying “from the blood of Abel to the blood of Zechariah, who perished between the altar and the sanctuary. Yes, I tell you, it will be required of this generation” (Luke 11:51) thereby classifying Abel as a prophet. The context clearly shows that Jesus was talking about the religious leaders (Luke 11:42-50).

When Abimelech nearly took Abraham’s wife for himself, the Lord warned him that this woman is the wife of a prophet (Gen 20:3-4) but knew it was not Abimelech’s fault (Gen 20:6) but God still told him “return the man’s wife, for he is a prophet, so that he will pray for you, and you shall live. But if you do not return her, know that you shall surely die, you and all who are yours” (Gen 20:7).

Amos is one of the twelve Minor Prophets and preached against the Northern Kingdom, Israel, and wrote during a time of relative peace and prosperity but neglect of religion, similar to what it is in America, Europe, Australia, and Canada.

Luke informs us that “there was a prophetess, Anna, the daughter of Phanuel, of the tribe of Asher” (Luke 2:36) and she had been “waiting for the redemption of Jerusalem” (Luke 2:38b) and like Simeon (Luke 2:34-35) saw the redemption come in the Redeemer.

Another of the Minor Prophets but there’s nothing minor about the Book of Daniel. Taken into captivity as a very young teen, he stood on his biblical foundation and never deviated from God’s Law, even at the threat and attempts of death. 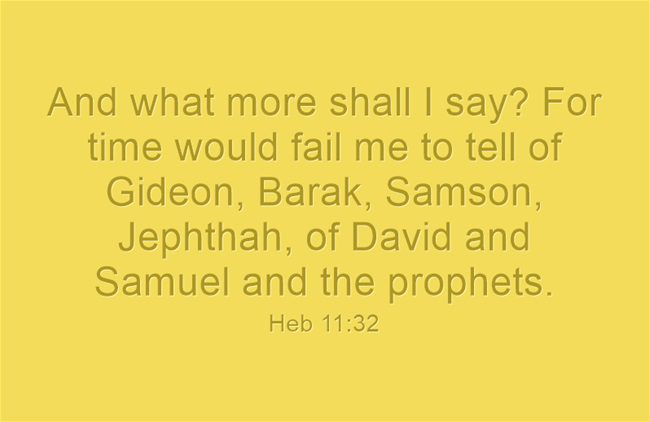 If you only read Psalm twenty-one, twenty-two, and twenty-three, you’ll be convinced that David was a prophet which is part of the reason he ends up in the “Hall of Faith” in Hebrews 11:32 where the author writes, “And what more shall I say? For time would fail me to tell of Gideon, Barak, Samson, Jephthah, of David and Samuel and the prophets.”

During the times of the Judges, when once again Israel cried out for deliverance, “Deborah, a prophetess, the wife of Lappidoth, was judging Israel at that time” and this courageous woman of God led Israel to victory by prophesying to and encouraging Barak, “Up! For this is the day in which the Lord has given Sisera into your hand. Does not the Lord go out before you” (Judges 4:14) and “not a man was left” (Judges 4:16).

Elijah is one of the best known prophets to the Jews because they were expecting Elijah to return someday (Malachi 4:5-6) as Elijah was taken up to heaven and apparently, never tasted death (2nd Kings 2:11-12).

Elisha took up the mantle of Elijah’s ministry and asked for a double portion of Elijah’s spirit (2nd Kings 2:9) and Elisha ends up doing twice as many miracles as did Elijah.

Most people might not be aware that Enoch, who was said to have walked with God, (Gen 5:24), was also a prophet as Jude writes “Enoch, the seventh from Adam, prophesied about them: “See, the Lord is coming with thousands upon thousands of his holy ones to judge everyone, and to convict all of them of all the ungodly acts they have committed in their ungodliness, and of all the defiant words ungodly sinners have spoken against him” (Jude 1:14-15) apparently from the Jewish “Frist Book of Enoch.”

Ezekiel revealed prophecies regarding the destruction of Jerusalem but also the restoration of Israel in his “Temple Visions” while in exile in Babylon.

Habakkuk the Prophet is the eighth of the twelve Minor Prophets and we don’t know he original name and nearly nothing is known of his background or life.

Haggai is yet another of the Minor Prophets and like Habakkuk, precious little is known about him and even his name may not be his actual name because Haggai means “my holiday” referring to God.

Hosea’s name means “salvation” but is often seen as the “prophet of doom” but the Jews but actually under all of the “doomsday” prophecies, he gives the reader a hint of the coming restoration of Israel.

Huldah was also a prophetess of God and the king, the priest, and other important men went to her to inquire of God.

Isaiah the Prophet, whose name literally means “Yah is salvation” was one of Jesus’ favorite readings in the Temple and told of the Messiah’s coming suffering (53) and is very much a book about Jesus.

Jeremiah, the so-called “weeping prophet” was, like Isaiah, one of the Major Prophets and warned Judah time and again about the coming destruction of Jerusalem and captivity of the Jewish people. God had Jeremiah warn the nation, even though God said that they would not listen (Jer 2:30; 5:3; 6:17).

Jesus has been described as a teacher and prophet, even though He is the Son of God and fully God. If you read Matthew chapters twenty four and twenty five, you can clearly see He prophesied about the end times.

Joel, one of the twelve Minor Prophets, prophesied about the day when God would pour out His Spirit upon all flesh and that they would speak prophecies and have dreams and visions (Joel 2:28-29).

Jonah, the prophet who tried to run away from God’s call to witness to Nineveh was one of the Minor Prophets who prophesied primarily to the Northern Kingdom, Israel.

Malachi, the last prophet of the Old Testament wrote about the coming of one who would prepare the way for the coming Messiah in the spirit of Elijah and that was about John the Baptist, who fulfilled the prophecy.

Micah, whose name means “who is like God?” was also a Minor Prophet and a contemporary of Amos, Isaiah, and Hosea who directed his prophecies specifically to Jerusalem and like all the prophets, his warnings were ignored.

Moses was a prophet and not just the religious leader of Israel but also the Lawgiver. Moses prophesied of the coming One Who “God will raise up for you a prophet like me from among you, from your brothers—it is to him you shall listen” (Duet 18:15) and whoever rejects Him, rejects God (Duet 18:18-20).

Nahum is a little known Minor Prophet who, chronologically, has his book come between Micah and Habakkuk and prophesied about the coming end of the Assyrian Empire and the fall of their chief city, Nineveh.

Nathan the Prophet was the prophet that King David typically consulted and of course Nathan is the one who said “You are the man” (2nd Sam 12:7)!

Obadiah is also a Minor Prophet whose name means “servant of God” and looked forward to the end of the captivity that Judah was in at the time.

Samuel the Prophet was grieved when Israel asked for a king but God knew it wasn’t Samuel they were rejecting but Him (1st Sam 8:6). God used him in the anointing of the Israel’s first two kings (Saul and David) and in communicating God’s will for these kings.

Yes, I believe that these two men were prophets in the sense of preaching the gospel and warning those who reject Christ. Acts 13:1 says “Now there were in the church at Antioch prophets and teachers, Barnabas, Simeon who was called Niger, Lucius of Cyrene, Manaen a lifelong friend of Herod the tetrarch, and Saul.” Teachers are “forth” or “truth tellers” and so they can be both a teacher and a prophet and this verse seems to indicate that they were.

Simeon too was a prophet for he prophesied “and said to Mary his mother, “Behold, this child is appointed for the fall and rising of many in Israel, and for a sign that is opposed (and a sword will pierce through your own soul also), so that thoughts from many hearts may be revealed”(Luke 2:34-35).

Zechariah is one of the Minor Prophets too and whose name means “God has remembered” and is very fitting because He was a prophet of Judah and was of the priestly line, just as Ezekiel.

The last in alphabetical order, Zephaniah was a Minor Prophet but there was nothing minor about his prophecies as his name meant “concealed of God” and was a contemporary of Jeremiah the Prophet and also prophesied to the nation of Judah.

Some Bible scholars believe that Jacob was a prophet but really, he received a prophecy through a dream (Gen 28:11-16) but if he only received a prophecy from God, does that make him one? My point is, the most obvious prophets were included in this article and to give them a place in time and history and to do so chronologically wouldn’t have made it easier to review but it was hoped that it would be easier to list them alphabetically.

October 7, 2015
What Does The Word Meek Mean In The Bible? Bible Definition Of Meekness
Next Post