First Will Be Last Bible Verse Meaning And Study

Why does Jesus say the first shall be last and the last shall be first? What is He trying to teach us?

Being First is Being Last

In the ways of the world, it is survival of the fittest. To those who are first, they see the last as deserving of being there. If they’re first, then they deserve to be first, but Jesus turns this on its head by saying “the last will be first, and the first last” (Matt 20:16). This is in direct opposition to the way that the world operates. The world believes in “first come, first served” and not “first come to serve” but this still does not full explain the meaning of this verse in Matthew chapter twenty. Perhaps Jesus is saying all those who are last in this world will be first in the kingdom. The kingdom of God is what this parable’s about. The last or the least will be the first and the greatest in the kingdom. In the New Jerusalem, or in the kingdom of God, the most despised, rejected, scorned, and ridiculed of the world, and done so by those who are these “first,” will become first and foremost in the kingdom as they rule with Christ but of course, under Christ (2nd Tim 2:12; Rev 1:6; Rev 5:10).

The Laborers in the Vineyard

When Jesus said “the last will be first, and the first last” (Matt 20:16) He was giving His conclusion to the parable of the Laborers in the Vineyard. In this parable, Jesus explains that “the kingdom of heaven is like a master of a house who went out early in the morning to hire laborers for his vineyard. After agreeing with the laborers for a denarius a day, he sent them into his vineyard” (Matt 20:1-2) and late in the day the master of the house found more laborers who agreed to the same wages he offered the early morning workers (Matt 20:6-7) but when it came time to receive their pay, the ones who came late received the same pay as those who were hired late in the day. Those hired in the morning were angry and said, “These last worked only one hour, and you have made them equal to us who have borne the burden of the day and the scorching heat.’ But he replied to one of them, ‘Friend, I am doing you no wrong. Did you not agree with me for a denarius? Take what belongs to you and go. I choose to give to this last worker as I give to you. Am I not allowed to do what I choose with what belongs to me? Or do you begrudge my generosity” (Matt 20:12-15). The first believed they deserved more than what the last laborers hired received but the master reminded them that he had a right to “choose with what belongs to” him and so he was saying “the last will be first, and the first last” (Matt 20:16). 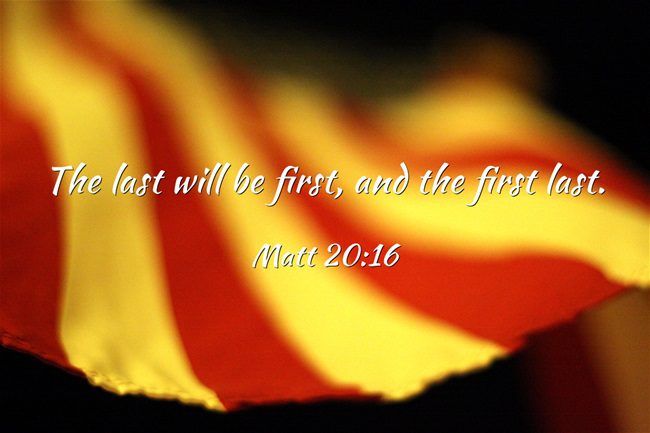 The Gospel of Luke and the Gospel of Mark also have this saying found in Matthew chapter twenty but Jesus used this saying in a completely different context although it was, like all of His parables, about the kingdom of heaven or of kingdom of God and about salvation and entering the kingdom. In the Gospel of Luke, Jesus’ conclusion is close to that of Matthew 20:16 as He says “some are last who will be first, and some are first who will be last” (Luke 13:20). Someone had previously asked Jesus “will those who are saved be few?” And he said to them, “Strive to enter through the narrow door. For many, I tell you, will seek to enter and will not be able” (Luke 13:23-24). Jesus’ answer to that man was yes, few will be saved and many will strive to enter it and not be able to. Maybe it’s the “seeking” part that’s the problem because no amount of human seeking or good works can ever save us (Eph 2:8-9) because no one actually seeks after God (Rom 3:11). When they “begin to stand outside and to knock at the door, saying, ‘Lord, open to us,’ then he will answer you, ‘I do not know where you come from” (Luke 13:25) and He will tell them “I do not know where you come from. Depart from me, all you workers of evil!’ In that place there will be weeping and gnashing of teeth, when you see Abraham and Isaac and Jacob and all the prophets in the kingdom of God but you yourselves cast out” (Luke 13:27-28). That is the reason that “some are last who will be first, and some are first who will be last” (Luke 13:3). The self-righteous (like the Pharisees) expect to be in the kingdom, just like many today, but will discover that they’ve never really repented and trusted in Christ which is why He tells them “depart from me” (Luke 13:27) because “I do not know” you (Luke 13:25).

In the place where Mark records Jesus saying “many who are first will be last, and the last first” (Mark 10:31) it is in the context of where He had just been speaking to a rich man who wanted to know what he must do to inherit eternal life (Mark 10:17). Sadly, the rich man didn’t understand that it’s not what you do (Eph 2:8-9) but what Jesus has done that brings eternal life. Since the young man seemed to be self-righteous (Mark 10:20), Jesus showed him the idol of his heart. It was money. Jesus exposed this man’s real god, “You lack one thing: go, sell all that you have and give to the poor, and you will have treasure in heaven; and come, follow me.” Disheartened by the saying, he went away sorrowful, for he had great possessions” (Mark 10:21-22). Jesus gives the conclusion of this experience by telling His disciples “many who are first will be last, and the last first” (Mark 10:31). Once again we see idea that the first or preeminent people of the world will be last in the coming kingdom and the least in the world today will be the greatest (Matt 11:11).

Its one thing to proclaim “I know Christ” but the most crucial question is does Jesus know you. That’s what He emphasizes several times about His second coming. In Matthew 7:22 many will come to Him on that day saying “Lord, Lord” but what does Jesus say? He doesn’t say “Hey, I saw you in church every Sunday, You were a good Sunday school teacher,” or “You had perfect Sunday school attendance” but rather He will say “I never knew you; depart from me, you workers of lawlessness’” (Matt 7:23). Better to have Christ know you than to hear Him say someday “Depart from me, you cursed, into the eternal fire prepared for the devil and his angels” (Matt 25:41).

November 13, 2015
This Too Shall Pass Bible Verse Meaning And Study
Next Post

November 13, 2015 Do Unto Others Bible Verse Meaning And Study
Recent Comments
2 Comments | Leave a Comment
Browse Our Archives
get the latest from
Evangelical
Sign up for our newsletter
POPULAR AT PATHEOS Evangelical
1