What does it mean where the Bible says “a house divided cannot stand?” What does this mean for us today?

The House of Israel

At one time, Israel was a kingdom that was not divided. Under King David, the nation of Israel rose to the zenith of its power, at least in this age. It wasn’t until after David’s son Solomon had died that his sons ripped the nation in half. Rehoboam was chosen to be the next king but after hearing of Solomon’s death, Jeroboam returned from Egypt where he had fled for a time and he came back leading a group of people to confront Rehoboam with a demand for a lighter tax burden. It was only after Rehoboam refused the demand that the ten of the tribes rejected Rehoboam as king and David’s dynasty of Israel began to crumble. One became the Northern Kingdom and was known as Israel. The Southern Kingdom was Judah and although they only had 2 of the tribes (Judah and Benjamin as well as the Levites) they were still a formidable nation. Jeroboam became the king of Israel (and the ten tribes) while Rehoboam became king of Judah. The nation became divided as prophecies by Ahijah as a judgment of God on David and the nation, showing that nations can suffer from poor leadership. The house of Israel was now divided and it will not stand for long.

As the Northern Kingdom split off from the Southern Kingdom, there were growing tensions between the two. Israel (the Northern Kingdom) increasingly fell into idolatry and even though Judah was not in complete obedience to God’s laws, they were not as idolatrous as Israel. When Israel finally went to war with Judah, Israel was soundly defeated. These tribes already had a long history of waring among one another (2nd Sam 3). Like the United States of America fought with the Confederate State of America, it threatened to split the nation in half forever. Thankfully, this didn’t end the nation but any nation that divides, like Israel did, is not going to be able to stand for very long. 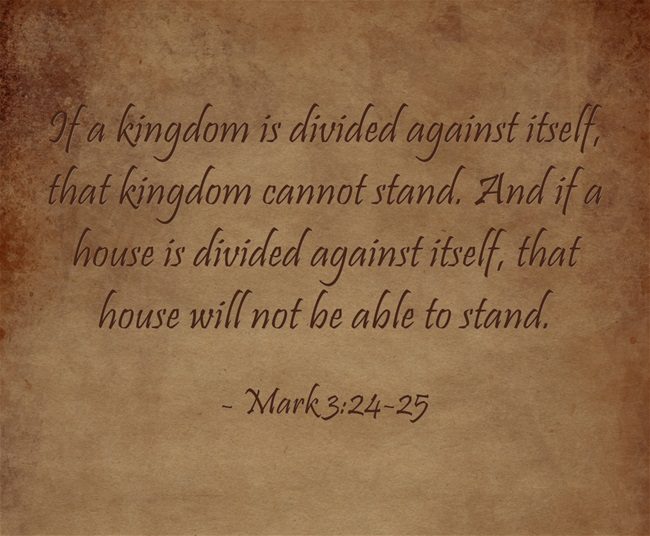 Just after Jesus had healed a man the scribes accused Jesus of casting out demons by the power of Satan (Beelzebul) (Mark 3:22) and so Jesus replied “How can Satan cast out Satan? If a kingdom is divided against itself, that kingdom cannot stand. And if a house is divided against itself, that house will not be able to stand. And if Satan has risen up against himself and is divided, he cannot stand, but is coming to an end” (Mark 3:23-26). His point is that it could not have been by demonic power that Jesus cast out a demon because that is contrary to the way kingdoms operate, particularly Satan’s. If kingdoms did divide against themselves then they wouldn’t be around for very long and so why would Satan work against his own interests? The answer is he would not. It wasn’t the miracle they rejected, it was Jesus! The masses were divided against those who believed in Jesus and those who didn’t. The overwhelming majority of His followers would abandon Him at the cross. In fact, the very ones that earlier in the week cried out “Hosanna in the Highest” now screamed “Crucify Him!” The nation was deeply divided over Jesus so this nation came crashing down around them in AD 70 when the Roman’s destroyed Jerusalem.

Jesus knew that they were attributing His miracles to Satan’s power and so warned them in a very serious manner that “all sins will be forgiven the children of man, and whatever blasphemies they utter, but whoever blasphemes against the Holy Spirit never has forgiveness, but is guilty of an eternal sin”—for they were saying, “He has an unclean spirit” (Mark 3:28-20). This sin was especially applicable to the religious leaders of Jesus’ day because, as Nicodemus said, “we know that you are a teacher come from God, for no one can do these signs that you do unless God is with him” (John 3:2). They knew he had no evil spirit in Him and He did much good by healing so many. All of the miraculous signs confirmed that He was the long awaited Messiah, yet they hardened their hearts and credited His powers to Satan. They also knew the Scriptures and understood the signs that Jesus did and should know better. They also had heard from John the Baptist, a man they were afraid to deny was not sent from God and how John spoke of Jesus being the Lamb of God that takes away the sins of the world. Knowing all of this, they blasphemed God the Holy Spirit because they resisted Him, willingly, rejecting the stark reality of Who Jesus was and accusing Jesus of casting out demons by the power of Satan when they absolutely knew better.

If you have continued to reject Jesus time and again, you’re hardening your heart. Every time you hear the gospel which is the need to repent (forsake and turn away from sins) and trust in Christ, and then reject it, you are pushing the witness of the Holy Spirit further and further away until finally “God gave them up to a debased mind to do what ought not to be done” (Rom 1:28). If that is you, you are standing on the thin ice of eternity from which you won’t get a second chance. The author of Hebrews writes “Today, if you hear his voice, do not harden your hearts as in the rebellion” (Heb 3:15) and even better “now is the time of God’s favor, now is the day of salvation” (2nd Cor 6:2).

November 16, 2015
Lilies Of The Field Bible Verse Meaning And Study
Next Post

November 16, 2015 The Writing On The Wall Bible Verse Meaning And Study
Recent Comments
0 | Leave a Comment
"Hi Cody. I just want to check on you to see how you're doing. :> ..."
Mish Top 7 Bible Verses To Help ..."
"Yeah and you are a God hater! End of story for you, and you will ..."
believe1009 What Does Oppressed Mean? A Biblical ..."
"Why, if Jesus did not die for negroes does the bible say in John 3:16 ..."
John Arthur Top 7 Bible Verses About Rapture ..."
"Do you hold to British Israel theory?"
John Arthur Top 7 Bible Verses About Rapture ..."
Browse Our Archives
get the latest from
Christian Crier
Sign up for our newsletter
POPULAR AT PATHEOS Evangelical
1