My Cup Runneth Over Bible Verse Meaning And Study

What is meant by the phrase “my cup runneth over” found in the 23rd Psalm? Does it have application for the believer today?

The 23rd Psalm may be the most beautiful of all chapters in the Bible because it gives an accurate description of the Great Shepherd’s protection, provisions, and praises. David writes “You prepare a table before me in the presence of my enemies; you anoint my head with oil; my cup overflows” (23:5) so the question is; what does the “cup” represent? In the context of this verse and chapter, it speaks about God’s provisions and blessings. The cup is our normal portion in life that God gives each man and woman as He pleases. This psalm made sense to the Jews because when they received a guest, they would intentionally overfill the cup and allow it to run over and by doing this, the guest would know that they’re welcome to stay as long as they want. The psalmist says that God has prepared the table for him (and us) us, He anointed us with oil (representative of the Holy Spirit), and has provided all that we will ever need, even in our times of need. Our cup is not half empty…it is overflowing.

We can presume that David was talking about his cup running over with wine. For the Jews, wine is the symbol of joy. That’s the association they had with all of their feasts as God commanded them to “spend the money for whatever you desire—oxen or sheep or wine or strong drink, whatever your appetite craves. And you shall eat there before the LORD your God and rejoice, you and your household” (Duet 14:26). This doesn’t mean God condones drunkenness though.  The Day of Atonement was the only exception because that was a day of fasting, but for all the other feast or holy days, God wanted them to rejoice in them and enjoy the fruits of God’s blessing and the fruit of their labor. 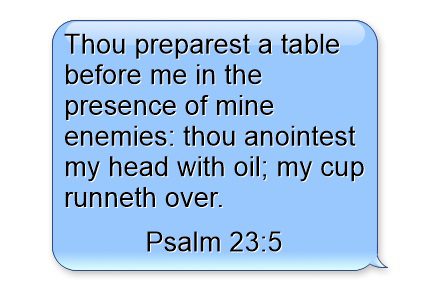 Where and When is the Cup?

David spoke as if the cup were in the present tense but it’s also easy to see this cup as running over all the way into the kingdom as in the very next sentence David writes “Surely goodness and mercy shall follow me all the days of my life and I shall dwell in the house of the Lord forever” (Psalm 23:6). God’s mercy follows him into the kingdom and then he will “dwell in the house of the Lord forever” but it means more than that; in the Hebrew it means he “shall return to dwell” again in the temple and be there “forever” pointing to the resurrection of the body. In other words, that cup’s going with him even after death and into eternal life. It’s not a literal, physical cup but the portion he’s been blessed with and there are so many blessings that it’s running over the cup and spilling out around it. By the way, that portion will remain forever.

More than once, Jesus prayed to have the cup removed from Him (Luke 22:42). It wasn’t really His portion but the sins of the world that were all placed in that cup. The cup of suffering, torture, beatings, scourging, crucifying, and then death were part of it but the greatest portion and most difficult part of the cup for Jesus to drink were the sins of mankind. That’s because He had never sinned. All of the human sins were condensed into one long, bitter drink, however this was our only hope (Acts 4:12) because now the sinner can have peace with God (Rom 5:1) through His justifying us (Rom 8:1) as it was “For our sake he made him to be sin who knew no sin, so that in him we might become the righteousness of God” (2nd Cor 5:21). Every believer will have their own cup of suffering but of course not like Jesus suffered. What is your cup of suffering? When you understand what the psalmist wrote, you’ll see your cup as running over, spilling out, and running all the way into eternity and never half empty.

If you’ve repeatedly refused to believe these messages of salvation time after time then you’ve rejected the only way to eternal life (John 3:16). The more you refuse to humble yourself and repent, the more you are hardening your heart and storing up the wrath of God to bear down upon you someday (Rom 2:5). Only the mighty dam of God’s mercy holds it back from consuming all in its path right now. Someday that flood of judgment will burst through the dam of His patience and longsuffering and either your future will be infinitely wonderful (Rev 22) or indescribably horrific (Rev 20:12-15).

November 16, 2015
Too Are Better Then One Bible Verse Meaning And Study
Next Post