Who Was With Jesus When He Ascended?

Who was there to watch Jesus in His ascension up to heaven?

The Ascension is very important to Christians because it ended Jesus’ earthly ministry, even though He still actively works in His church today since He is the Head of the church, but it signaled the beginning of the work of His disciples to fulfill the Great Commission (Matt 28:19-20). Forty days after Jesus’ resurrection, “he led them out as far as Bethany, and lifting up his hands he blessed them. While he blessed them, he parted from them and was carried up into heaven. And they worshiped him and returned to Jerusalem with great joy, and were continually in the temple blessing God” (Luke 24:50-53). Luke alone records both examples from two different books. He mentions Jesus ascension, as we have read, in Luke 24 but also in the Book of Acts where Luke writes that “as they were looking on, he was lifted up, and a cloud took him out of their sight. And while they were gazing into heaven as he went, behold, two men stood by them in white robes, and said, “Men of Galilee, why do you stand looking into heaven? This Jesus, who was taken up from you into heaven, will come in the same way as you saw him go into heaven” (Acts 1:9-11). Jesus is now seated at the right hand of the Father but He is returning again someday and at a time when nobody expects.

Who witnessed Jesus’ ascension? Where there only a select few of disciples or all of them? All we know is what Scripture tells us so we return again to Luke 24 find out who was present with Jesus prior to His Ascension. Luke 24:36b-39 says “Jesus himself stood among them, and said to them, “Peace to you!” But they were startled and frightened and thought they saw a spirit. And he said to them, “Why are you troubled, and why do doubts arise in your hearts? See my hands and my feet, that it is I myself. Touch me, and see. For a spirit does not have flesh and bones as you see that I have” after which “he opened their minds to understand the Scriptures, and said to them, “Thus it is written, that the Christ should suffer and on the third day rise from the dead, and that repentance and forgiveness of sins should be proclaimed in his name to all nations, beginning from Jerusalem” (Luke 24:45-47). Jesus opened the minds of His disciples and this usually refers to the twelve but at this time, there were only eleven since Judas had hanged himself and Matthias had not yet been selected to be the 12th disciple. 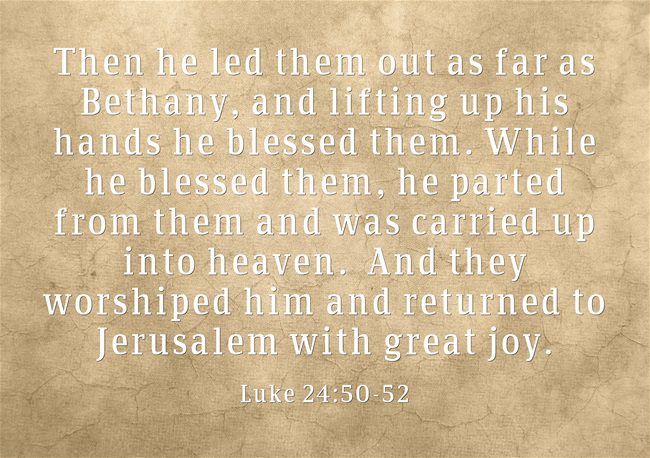 Who was with Jesus?

Jesus had just given the disciples the Great Commission and would repeat it again just before His Ascension so “when they had come together, they asked him, “Lord, will you at this time restore the kingdom to Israel?” He said to them, “It is not for you to know times or seasons that the Father has fixed by his own authority. But you will receive power when the Holy Spirit has come upon you, and you will be my witnesses in Jerusalem and in all Judea and Samaria, and to the end of the earth” (Acts 1:6-8). Who were those who had come together? It was clearly the disciples because “when he had said these things, as they were looking on, he was lifted up, and a cloud took him out of their sight. And while they were gazing into heaven as he went, behold, two men stood by them in white robes, and said, “Men of Galilee, why do you stand looking into heaven? This Jesus, who was taken up from you into heaven, will come in the same way as you saw him go into heaven” (Acts 1:9-11). The “they” is the same “they” in the very last part of Luke 24 and in the first part of Acts 1. They are the disciples; the eleven who had witnessed the Ascension but they had also witnessed the resurrection too.

The disciples “returned to Jerusalem from the mount called Olivet, which is near Jerusalem, a Sabbath day’s journey away. And when they had entered, they went up to the upper room, where they were staying, Peter and John and James and Andrew, Philip and Thomas, Bartholomew and Matthew, James the son of Alphaeus and Simon the Zealot and Judas the son of James”(Acts 1:12-13). Here is a list by name of the “they” who were with Jesus at His Ascension. By the way, there is a possibility that Jesus’ mother Mary and His brothers may have witnessed the Ascension too because the disciples came “together with the women and Mary the mother of Jesus, and his brothers” (Acts 1:14b) when they returned to Jerusalem. On the other hand, they may have only been waiting in the upper room for the disciples to return or Mary and Jesus’ brothers might not even have known about the Ascension. Incidentally, the “upper room” is the same “upper room” where Jesus and His disciples had to Passover Meal on the night that He was betrayed.

The disciples all witnessed Jesus Ascension possibly Mary and Jesus’ brothers, of the latter part we can’t be certain but the angels told the disciples that “This Jesus, who was taken up from you into heaven, will come in the same way as you saw him go into heaven” (Acts 1:11b) and that will be the most joyful experiences of the believer but the most horrific for those who have rejected and even scorned Him and used profanity against His name (Rev 20:12-15). God will not hold them guiltless who profane His holy name (Ex 20:7).

December 15, 2015
Who Was With Jesus In The Garden Of Gethsemane?
Next Post