What Was The City Of Sin From The Bible?

What Was The City Of Sin From The Bible? December 25, 2015 Jack Wellman

What was the city that the Bible called “the city of sin?”

The Apostle John tells us precisely what sin is. He says that “sin is lawlessness” (1st John 3:4) and that Law is the Law of God, which most certainly includes the Ten Commandments but also Jesus’ commands in the New Testament. Christians are declared saints by God but we’re also called sinners but the difference between the believer and the unbeliever is that one’s sins have been taken on by Christ at the cross; the unbeliever will have to bear their own sins (Rev 20:12-15). Sin separates us from God (Isaiah 59:2) but Jesus reconciles us back to God and lifts our condemnation (Rom 8:1) so now we can be at peace with God (Rom 5:1), making possible the peace of God.

Are there really such things as “sin cities?” I’ve heard people call Las Vegas sin city but since every city have people in them, in the strictest sense, all cities are full of sinners who all fall far short of God’s glory (Rom 3:23) and that makes every city a sin city because they’re sinners in them, including me! Yes, Las Vegas might be ahead of the curve but what goes on in the human heart can be just as bad as Jeremiah writes “The heart is deceitful above all things, and desperately sick; who can understand it” (Jer 17:9)? Sin is cosmic treason because we were made in the image of God (Gen 1::27) and God did not create us to be liars yet the Word of God declares “God is not man, that he should lie, or a son of man, that he should change his mind. Has he said, and will he not do it? Or has he spoken, and will he not fulfill it” (Numb 23:19) because “it is impossible for God to lie” (6:18). Paul is crystal clear about the natures of God and of man, writing “Let God be true though every one were a liar, as it is written, “That you may be justified in your words, and prevail when you are judged” (Rom 3:4). 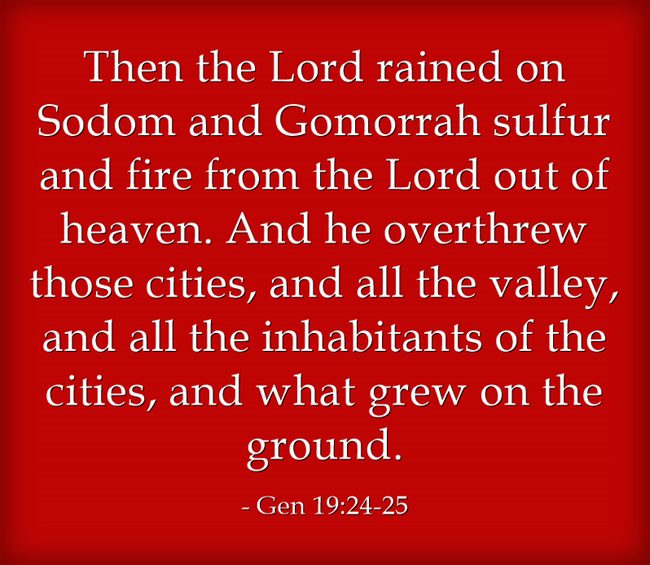 Lot was living in the most sinful city that there was at the time, at least that we know of from the Bible. When the two men (which were angels) found Lot, he was in the gates of the city which indicates that he must have been silent about his faith in God because they wouldn’t have had Lot “sitting in the gate of Sodom” (Gen 19:1) if he’d been witnessing about God’s righteousness. To sit “in the gate” meant that he was one of the cities leaders. This is where the angels found him and they tried to have him flee the city right away but Lot urged the angels to spend the night with him (Gen 19:2-3) so they did. The next morning, the angels “said to Lot, “Have you anyone else here? Sons-in-law, sons, daughters, or anyone you have in the city, bring them out of the place. For we are about to destroy this place, because the outcry against its people has become great before the Lord, and the Lord has sent us to destroy it.” So Lot went out and said to his sons-in-law, who were to marry his daughters, “Up! Get out of this place, for the Lord is about to destroy the city. But he seemed to his sons-in-law to be jesting” (Gen 19:12-14). That indicates that Lot’s son-in-laws didn’t flee Sodom with Lot and his family to escape God’s punishment on Sodom. As the time of God’s judgment approached, Lot “lingered. So the men seized him and his wife and his two daughters by the hand, the Lord being merciful to him, and they brought him out and set him outside the city. And as they brought them out, one said, “Escape for your life. Do not look back or stop anywhere in the valley. Escape to the hills, lest you be swept away” (Gen 19:16-17). By Lot lingering, he was showing that he really didn’t want to leave Sodom, just like Lot’s wife didn’t, and when she looked back, she became a pillar of salt (Gen 19:26).

A cities fate will end up the same as a nation would if they refused to live in righteousness. There is clearly a cause and effect relationship as Solomon wrote “Righteousness exalts a nation, but sin is a reproach to any people” (Prov 14:34) and the same could be said of a city. God appeared to Solomon at night and told him “if my people who are called by my name humble themselves, and pray and seek my face and turn from their wicked ways, then I will hear from heaven and will forgive their sin and heal their land” (2nd Chron 7:14) “But if you turn aside and forsake my statutes and my commandments that I have set before you, and go and serve other gods and worship them, then I will pluck you up from my land that I have given you, and this house that I have consecrated for my name, I will cast out of my sight, and I will make it a proverb and a byword among all peoples”(2nd Chron 7:19-20). Those are the only two choices they have. That’s it. A city or nation can Live righteously and thrive or forsake God and His commandments and people will be astonished at what happened (2nd Chron 7:21).

Today, there is no shortage of sin in both city and country. Only a perfect sacrifice that was found in the spotless Jesus Christ Who voluntarily presented Himself would be sufficient to save such a sinner as me and you. For this purpose, He offered His own shed blood for the forgiveness of sins and granting those who repent and believe eternal life.

December 25, 2015
How Do I Get Control Over Bad Thoughts?
Next Post

December 26, 2015 Is God Calling Me To Preach?
Recent Comments
33 Comments | Leave a Comment
Browse Our Archives
get the latest from
Christian Crier
Sign up for our newsletter
POPULAR AT PATHEOS Evangelical
1