Is Your Conscience The Voice Of God?

Is your conscience the voice of God speaking to you? How can you know if it is or isn’t?

What is the Conscience?

The word “conscience” is a compound of two words meaning “con” (with) “science” (knowledge), so our own conscience means having the knowledge of something we’re going to do or say, have done and said, or will do or say in the future. The conscience is not an audible voice but many say it’s very close to one since the conscience speaks to them (and us,) in thoughts about whether their actions are okay or not. The conscience lets us know what we’re doing and whether we should or shouldn’t do something or say something. In a sense, our conscience makes us responsible for our actions. When the Apostle Paul was brought before the council he said the same thing to them as he did to the church at Corinth; “For our boast is this, the testimony of our conscience, that we behaved in the world with simplicity and godly sincerity, not by earthly wisdom but by the grace of God, and supremely so toward you” (2nd Cor 1:12). Paul was giving testimony to why their consciences are not troubled, as he said “our,” meaning he was speaking for the others in the missionary party. Their consciences were not troubled at all, meaning that they were in a right relationship with God and with the church, so does our conscience actually God speaking to us? What does the Bible say about our conscience and whether this is how God speaks to us? Is our conscience our guide? It depends on whether it’s been seared or not, as we will later read.

Having a Clear Conscience

The Apostle Paul refers to the conscience when Luke records, “And looking intently at the council, Paul said, “Brothers, I have lived my life before God in all good conscience up to this day” (Acts 23:1). He had nothing to be ashamed of or his conscience would’ve been troubled. That’s what our conscience can do; it can differentiate between what is good and what is bad. For example, we can be “sinning against [our] brothers and wounding their conscience when it is weak [but then], you sin against Christ” (1st Cor 8:12), referring to offending them and what hurts the Body of Christ, hurts Christ Himself (Acts 9:4-5). Your conscience should tell you not to serve wine when entertaining someone who has struggled with alcohol. Paul used this same example when he wrote “If one of the unbelievers invites you to dinner and you are disposed to go, eat whatever is set before you without raising any question on the ground of conscience” (1st Cor 10:27). In this verse, Paul refers to the possibility of offending someone else’s conscience which is what he would have us do too. He wanted the Corinthians to have a clear conscience by avoiding offending others. Paul wanted them to be more considerate of others and in humility, esteeming others as better than themselves (Phil 2:3). 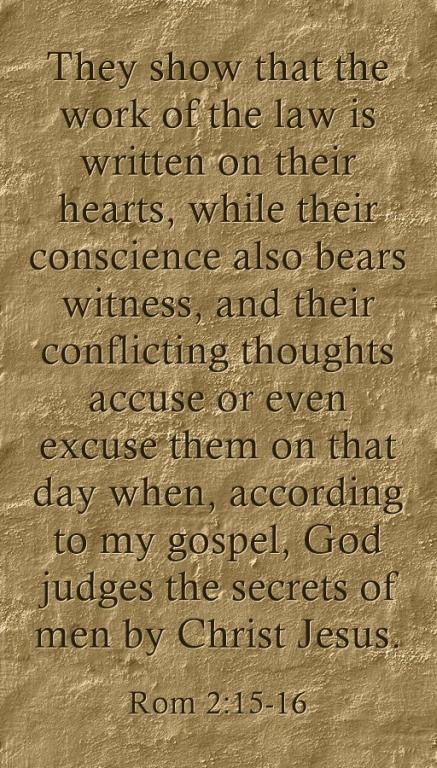 I cannot recall all the times when my conscience seemed to be speaking to me, saying, “Don’t do it!” and only later regretted not listening to it. I have had others tell me of similar experiences. They knew better, but they just didn’t listen to their conscience. Often, it was pride that was the reason and that’s why Paul tied in the necessity of humility to their (and our) not offending anyone’s conscience, but there are those who have so hardened their hearts that their conscience is either so suppressed that they can no longer “hear” it, or they have seared it or burned it so badly that it cannot even speak to the person. It’s like swallowing so much sin so often that the vocal cords of the conscience can no longer speak to the person. Paul refers to that happening in the next paragraph. Is there a point of no return for the conscience? It seems so because in Noah’s day the wickedness grew so great that God was going to destroy all of mankind, save Noah and his immediately family. In Genesis 6:5 we can see why: “The Lord saw that the wickedness of man was great in the earth, and that every intention of the thoughts of his heart was only evil continually.” It was so bad that evil was all they thought about, and they probably used their imaginations to think of even more despicable sins. They had so muffled their conscience that it was as if they had none.

Paul writes “that in later times some will depart from the faith by devoting themselves to deceitful spirits and teachings of demons, through the insincerity of liars whose consciences are seared” (1st Tim 4:1-2), and that has already happened. These false teachers, pastors, and so-called “apostles” today actually look good on camera because they appear as “angels of light,” (2nd Cor 11:14) but in reality, they’re wolves in sheep’s clothing. People clearly know right from wrong, even at a young age, and these false teachers are no exception. For them and other who refuse to repent, Paul writes, “They show that the work of the law is written on their hearts, while their conscience also bears witness, and their conflicting thoughts accuse or even excuse them on that day when, according to my gospel, God judges the secrets of men by Christ Jesus” (Rom 2:15-16). Paul adds that they have no excuse since they know God exists but they are simply suppressing that knowledge (Rom 1:18-21), and if you suppress your conscience long enough, you stop hearing from it, and as a result, “they became futile in their thinking, and their foolish hearts were darkened” (Rom 1:21). Like a callous that forms on a hand, after a time, there is no more feeling left where that callous is at. That’s what happens to unrepentant sinners; the sear their conscience to the point they can no longer hear from it.

God speaks to us by His Word, sometimes by His Spirit, but even through our conscience. The author of Hebrews wrote about the conscience, writing, “how much more will the blood of Christ, who through the eternal Spirit offered himself without blemish to God, purify our conscience from dead works to serve the living God” (Heb 9:14) and since our place before God is secure, “let us draw near with a true heart in full assurance of faith, with our hearts sprinkled clean from an evil conscience and our bodies washed with pure water” (Heb 10:22). The context of this verse is the blood of the Lamb of God saving us. After that happens, our conscious’ are now clear, but let a little sin sneak it, and it’s back to work for our God-given conscience. Listen to your conscience. It can help you avoid a lot of things you’ll later regret.

Why Aren't the Other Slavers Getting...
Cranach
Related posts from Christian Crier