How A Christian Can Overcome A Love Of Money

How A Christian Can Overcome A Love Of Money July 20, 2016 Jack Wellman

How can believers overcome the pulls of the love of money?

A Root of Evil

When the Apostle Paul wrote to Timothy, he was concerned about the sins that were associated with pursing money, because he knew that many were making shipwrecks of their faith. For this reason, Paul wrote, “the love of money is a root of all kinds of evils. It is through this craving that some have wandered away from the faith and pierced themselves with many pangs” (1st Tim 6:10). This doesn’t mean money is evil in itself because it’s an inanimate object. It cannot know good and evil. It is the “love of money” that is at the “root of all kinds of evil” (but not, all evil), so money is not evil; it is the pursuit of it because it can lead to wandering away from faith in Christ. By straying from the truth, their consciences are “pierced…with many pangs,” meaning they are laden with guilt, regret, and all the emotional turmoil that comes as a result of that. Remember, Judas was the church treasurer, but was really a thief. Judas greed brought great evil, as when Judas agreed to betray Jesus for thirty pieces of silver, “And when they heard it, they were glad and promised to give him money. And he sought an opportunity to betray him” (Mark 14:11), however, God can use evil for good (Gen 50:20; John 3:16).

Not only should a pastor be free from the love of money (1st Tim 3:3), so should deacons (1st Tim 3:8), elders, and in fact, all church leaders should not be in a place of responsibility in a church, if it’s only for their desire for money. Of course, turn on the TV and you’ll find no shortage of those “preachers” who approach being, “filthy rich.” That’s why so many poor people are drawn to them and to the word of faith movement where one preacher actually said, “Speak to your wallet….say, ‘look how full you are wallet.’” Next, we’ll hear their children saying, “Speak to the cookie jar, and say, ‘Look, you big jar full of cookies…’” It is easy to see that a desire for money can lead to straying from the faith but also biblical teaching. 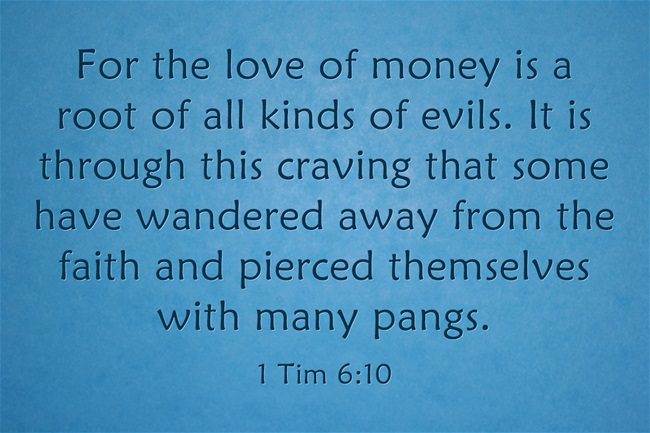 Jesus knew Judas heart and that his only motivation was to take as much money as he could from the money bag he carried. When someone spent an extravagant amount on Jesus by anointing Him with precious ointment, Judas complained about the waste, but “He said this, not because he cared about the poor, but because he was a thief, and having charge of the moneybag he used to help himself to what was put into it” (John 12:6). Judas had the money, but really, the money had him; at least his heart. Jesus warms the pursuers of money, “No one can serve two masters, for either he will hate the one and love the other, or he will be devoted to the one and despise the other. You cannot serve God and money” (Matt 6:24). If you seek the kingdom and God first and foremost, then He’ll ensure you’re needs are met (Matt 6:33).

Before Jesus began His earthly ministry, John the Baptist had a large following. This was a mixed audience of Jews, Samaritans, Greeks, Roman citizens, and even Roman soldiers. They sensed that he was a holy man from God, and so the Roman shoulders asked, “And we, what shall we do?” And he said to them, “Do not extort money from anyone by threats or by false accusation, and be content with your wages” (Luke 3:14). There came “Tax collectors also came to be baptized and said to him, “Teacher, what shall we do?” And he said to them, “Collect no more than you are authorized to do” (Luke 3:12-13), so John the Baptist told them to stop extorting money and be content with their wages. Since he told this to the Romans soldiers and the tax collectors, John was obviously concerned that their love of money would cause them to fall into an evil pursuit of money. This must have obviously been happening; otherwise John wouldn’t have even had to say that. He had probably witnessed this on more than one occasion. In the least, he must have heard about this happening. This is part of John’s ministry and teaching about repentance, which is a turning away from sin and having a new disposition or mind (2nd Cor 5:17), and to stop sinning.

A Christian can overcome the love of money by being generous…giving to others, but also as John the Baptist said, “be content with your wagers.”   “Godliness with contentment is the great gain” (1st Tim 6:6).  In the Apostle Paul’s last letter, he writes that in the end times “people will be lovers of self, lovers of money, proud, arrogant, abusive, disobedient to their parents, ungrateful, unholy” (2nd Tim 3:2). The other view of money comes from the psalmist who wrote, whoever “does not put out his money at interest and does not take a bribe against the innocent. He who does these things shall never be moved” (Psalm 15:5). Money is not evil. Money can be used for a lot of good. It is the pursuit of money that leads to evil, like the use of money for evil things. The pursuit of money leads to all kinds of sin and, in time, may lead to someone wandering away from the truth…if they were ever in the truth in the first place. The Apostle John writes of such people; “They went out from us, but they were not of us; for if they had been of us, they would have continued with us. But they went out, that it might become plain that they all are not of us” (1st John 2:19).

July 20, 2016 What Do Christian Missionaries Do?
Recent Comments
4 Comments | Leave a Comment
Browse Our Archives
get the latest from
Evangelical
Sign up for our newsletter
POPULAR AT PATHEOS Evangelical
1