What Happened To Nations Under Corrupt or Bad Leadership In The Bible?

What Happened To Nations Under Corrupt or Bad Leadership In The Bible? August 16, 2016 Jack Wellman

The Bible tells us what happens to nations that fall into corruption and ungodly leadership.

What happens to nations that fall into corruption and who have ungodly leadership? It seems obvious to most Christians because they can read the history of mankind, but also the historical accounts written in the Bible where nations departed from obedience to God and later fell into ruin because of idolatry (with sexually immoral practices), exceeding greed, and neglect of the poor, like the orphans and the widows. This was the case with the Roman Empire where there was rampant sexual immorality, multiple marriages and divorces, child abuse (physical and sexual), over-taxation, and a growing national debt that threatened the empire’s solvency and national defense. These and other causes would all become her downfall. Since nothing happens outside of the sovereign will of God (Matt 10:29), this must have been a judgment of God. The national and civilian population had reached a point that reflected the days of Noah, where all they thought about was sin (Gen 6:5).

When God Abandons a Nation

During the time of the judges in ancient Israel, everyone did what was seen as right in their own eyes (Judges 21:25), but when that happens, the counsel of God is ignored, and as a result, the fell into captivity time after time. They would finally repent and God would send them a judge to rescue them, but right after he (or she) died, they would fall back into their sinful pattern and that would bring them back into destruction. Similar kings of ancient Israel (and later, Judah) took their nations through this same cycle. If you look at history, they cycle is not unique to Israel. When Samson judged Israel for twenty years, he reached such a state of disobedience to God that was said of him that “he did not know that the LORD had left him” (Judges 16:20b), and that may be what’s happening to our nation today and many others around the world. God has left them. We might think that millions in our nation are Christians, but when it comes to the fruit, the tree is a bit barren! Many will saw to the Lord on the day of His return, “Lord, Lord,” but these same “many” will be turned away from the presence of God (Matt 7:13-23). The Bible teaches that many are called but few are chosen. Broad is the path to destruction but narrow and difficult is the path to eternal life and why “few there be that find it” (Matt 7:14). 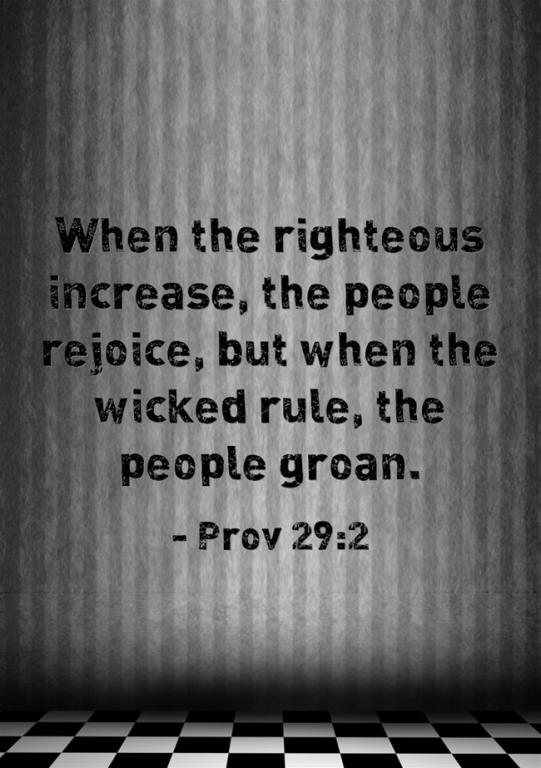 When a nation finally forsakes God, God will surely forsake them. In fact, He may have already done so in many cases. That’s because any nation that exists and operates by indiscriminately breaking (in fact, defying) God’s Laws are subject to the same fates as the ancient Israelites, the Roman Empire, and any other people which lives outside of the will of God. The truth is, “When it goes well with the righteous, the city rejoices” (Prov 11:10a), and “when the righteous increase, the people rejoice, but when the wicked rule, the people groan” (Prov 29:2). The groan for the same reasons that others did in the past; over-taxation, a huge national debt and growing, national defense and security issues, sexual immorality, and corruption in the private, public, and political sphere.

You cannot break God’s moral laws without them breaking you, and it doesn’t matter if it relates to one person or an entire nation. If we choose to sin, we choose to suffer, because we are the ones that choose our way and not God’s, and since God is sovereign, He will hold each nation and individual responsible; even more so with the national leaders. He has that authority to do that. It is God Who “changes times and seasons; he removes kings and sets up kings” (Dan 2:21a). God is omnipotent; He can punish or bring down any nation He chooses, just as we read in the Old Testament. He brings up one nation to punish another, but sometimes the nation can implode from within, because they’ve been their own worst enemy. The government may be doing more damage to the nation than her people are, but the people will still feel the consequences and suffer for it. In Noah’s day, it had grown so bad that “the earth was corrupt in God’s sight, and the earth was filled with violence. And God saw the earth, and behold, it was corrupt, for all flesh had corrupted their way on the earth” (Gen 6:11-12) and “the wickedness of man was great in the earth, and that every intention of the thoughts of his heart was only evil continually” (Gen 6:5). This type of civilization brought God’s judgment and it came suddenly, just as it will again when Christ returns (Rev 22:12). It will be when “he is coming with the clouds, and every eye will see him, even those who pierced him, and all tribes of the earth will wail on account of him” (Rev 1:8). They wail because they know that God exists and now they face His judgment. All their lives, they have suppressed the knowledge of God (Rom 1:18), despite that fact that’s it’s obvious that God does exist (Rom 1:19-21).

If we are not happy with who are choices are in political office, that’s no reason not to vote, but God may use ungodly leadership as a form of disciplining a nation. He did the same thing with ancient Israel and then Judah. He gave them up to their own sins, and then God gave them the king they deserved. Can we as a nation still hear God’s voice, where He tells His people, “Oh, that my people would listen to me” (Psalm 81:13a), and “I would soon subdue their enemies and turn my hand against their foes” (Psalm 81:4), but sadly, our nation may hear the very same thing He told ancient Israel, and that was that “my people did not listen to my voice” (Psalm 81:11). By the way, His voice can still be heard today in His written Word, the Bible. God speaks to us by His Spirit and through His Word to point us to the Living Word, Jesus Christ. Whoever is not abiding in His Word (John 15:5), will be cast into the fire (John 15:6); a fire that is never quenched, and in a place where their worn does not die (Mark 9:48).

Jack Wellman is Pastor of the Mulvane Brethren Church in Mulvane Kansas. Jack is also the Senior Writer at What Christians Want To Know whose mission is to equip, encourage, and energize Christians and to address questions about the believer’s daily walk with God and the Bible. You can follow Jack on Google Plus or check out his book Teaching Children the Gospel available on Amazon

Question Everything
Socrates was killed for asking the wrong questions in a city that...
view all Evangelical blogs
What Are Your Thoughts?leave a comment
Copyright 2008-2020, Patheos. All rights reserved.