What Does Being A Disciple of Jesus Mean?

What Does Being A Disciple of Jesus Mean? March 10, 2017 Jack Wellman

What does it mean to be a disciple of Jesus Christ? Why are we to make disciples of others?

What is a Disciple?

Jesus warned those who were not willing to pay the price of following Him by saying, “any one of you who does not renounce all that he has cannot be my disciple” (Luke 14:33), so what is a disciple so that we may be sure that we are one of His disciples? The word disciple comes from the Old English discipul which comes from the Latin discipulus, meaning, “pupil, student, follower,” and said to be from discere which means “to learn” from and where we get the word “discern. ” This comes from the root word, dek which means “to take, accept,” so as the disciples were instructed to take up and follow what Jesus Christ told us to do (i.e. Matt 28:18-20), so being a disciple means being a student, learner, or pupil. Obviously, being a disciple is being a student or learner of Christ, but the discipleship class for believers will never end until the day of their death or when Jesus Christ returns to judge the world. A person that is a disciple of Jesus is someone called to live “in” Christ, be equipped to live “like” Christ, and sent to live “for” Christ. Our calling includes salvation and abiding in Christ (John 8:31-32), but the church equips the saints in their spiritual formation and growth into Christ-likeness (2nd Timothy 3:16–17). When Jesus told the disciples to make disciples of all nations, He was telling them to teach others the very same things that He had taught them. Discipling others includes loving God, but also loving our neighbor as ourselves (Matthew 28:18-20, John 15:8, John 13:33-35). That’s the way Jesus lived. God doesn’t want any more religious people (remember the Pharisees?). He wants disciples after His own heart, with the express purpose of being more like Christ, and helping others know Christ in order that they might be saved to become more like Christ. That is discipleship. 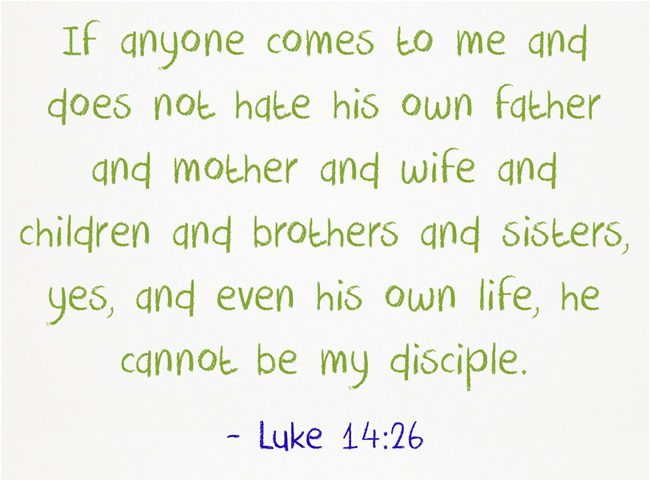 A person that’s truly committed will do almost anything that’s humanly possible to keep their commitment, and that’s just what Jesus is looking for. You can’t be half in or half out. You (and I) must be “all in!” A lot of people said they would follow Jesus, but they kept coming up with different excuses, some of which didn’t even make sense (Luke 9:57-61), so Jesus warned them, “No one who puts his hand to the plow and looks back is fit for the kingdom of God” (Luke 9:62). We must “Commit [our] way to the LORD; trust in him, and he will act” (Psalm 37:5). To be a disciple of Christ’s you must study His textbook, the Bible. It would be like enlisting a man or woman in the Army and not telling them how to load and shoot their gun. The risk of not discipling new believers is that they will almost always become lukewarm in their faith, stop growing in their faith, become worldlier in behavior, and then live out a hypocritical life as a “Christian.” I know. I was proof of that! For this reason alone, anything less than a plan to disciple every willing person is going to be a catastrophic moral failure. Dietrich Bonhoeffer wrote a book on the cost of being a disciple of Jesus, and then had to live out that teaching by necessity. Ultimately, the cost of being a disciple of Christ was his death in a Nazi prison camp! Dietrich Bonhoeffer desired to be a disciple of Christ and then entered into the sufferings of Christ. Paul says, that’s what He desired in order “that I may know him and the power of his resurrection, and may share his sufferings, becoming like him in his death” (Phil 3:10). That’s exactly what the Paul and Bonhoeffer faced. Bonhoeffer wise said, “When Christ calls a man, he bids him come and die.” This was literally true for him.

Christianity without discipleship is always Christianity without Christ. Those are the words of Dietrich Bonhoeffer, as a true disciple will put their hand to the plow and not look back (Luke 9:62), and as they will grow in Christ, and they will become increasingly unsatisfied with anything less than His call and character. This is a 24/7 call and not just for Sundays. We are the last ones on earth that we typically want to deny. We often don’t want to deny our flesh, our desires, or our passions, but we must give it all up for His sake if we really want to be a disciple of His. Today, if the rich young ruler came to our church, would we welcome him and ask him to sit on our church board or financial committee or be our treasurer, or would we ask him, what is most precious to you? Actually, Who is most precious to you? Here’s a view of those who would qualify to be one of Jesus’ disciples:

They had no financial clout.

They had no formal theological training.

They were a diverse group.

They were not affluent.

They had no power in society.

They would have been unqualified to be a Pharisee.

Peter was brash. John was given to anger (calling fire down from heave!?), Thomas was full of doubt. Matthew was politically conservative, Simon was radical….and so on. Those who are looked down upon by society are often the ones Jesus calls. Are you qualified to be a disciple of Christ?

To be a disciple of Jesus is more than just making a decision. Jesus said, “If anyone comes to me and does not hate his own father and mother and wife and children and brothers and sisters, yes, and even his own life, he cannot be my disciple” (Luke 14:26), and “Whoever does not bear his own cross and come after me cannot be my disciple” (Luke 14:27). Of course, we’re not supposed to hate anyone, but Jesus is speaking in hyperbole or using an extreme example to emphasize His point. Who is first in their life? Is it seeking the kingdom of God first, which means seeking the King of that kingdom first (Matt 6:33)? How desperate are they to become more like Christ, even if it means to suffer for Christ? Those are questions a disciple of Christ would ask. Where is my cross that I might take it up and follow Christ?

March 8, 2017
How To Honor Parents That Are Less Than Honorable
Next Post

March 13, 2017 What Is The Remnant Mentioned In The Bible?
Recent Comments
80 Comments | Leave a Comment
Browse Our Archives
get the latest from
Evangelical
Sign up for our newsletter
POPULAR AT PATHEOS Evangelical
1