Why did Jesus have to suffer and die to remove our sins? Couldn’t God just have forgiven us?

Imagine a judge coming into the courtroom and the criminal standing before the judge and he or she has just been caught robbing a bank. Would it be kind or good of the judge to just let the criminal go and not have the victim receive satisfaction? Why not just forgive them and give them another chance? If he is a good judge, won’t he or she just let them go? Can’t the judge just forgive them? You can plainly see how that wouldn’t work at all. This rendering of injustice would only make others want to do the same thing. If they see that the judge let them go, then others would simply do the same thing in the hopes that they too would be freed if they were caught, so why couldn’t God just forgive our sins without having Jesus suffer and die? Perhaps now you can see why God just couldn’t sweep out sins under the carpet. If there is no penalty for committing a crime, then crime would be rampant and systemic throughout our society. Penalties act as deterrents to crime because if there is no penalty for breaking the law then lawlessness will prevail. 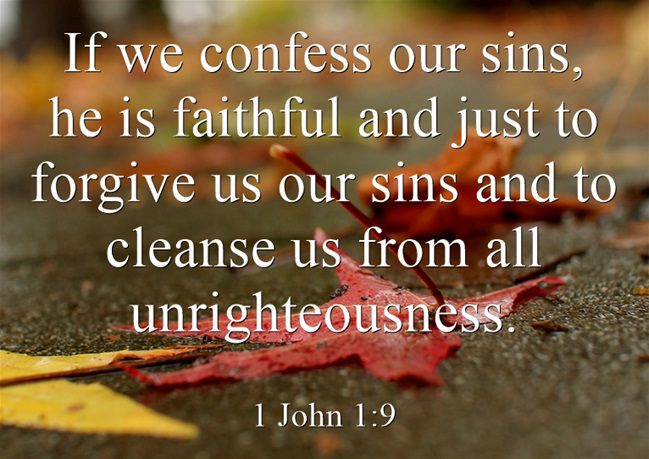 Every single human that has ever lived has sinned and broken God’s laws. Only Jesus was sinless but He was both God and Man, so there are no exceptions as we are all lawbreakers. Of course I include myself just as the Apostle Paul included himself and wrote, “I know that nothing good dwells in me, that is, in my flesh. For I have the desire to do what is right, but not the ability to carry it out. For I do not do the good I want, but the evil I do not want is what I keep on doing” (Rom 7:18-19). Isn’t that a description of you and me? I want to do what is right, but often I do what is wrong and then I try to avoid doing the wrong thing and then do it anyway. That’s why Paul wrote, “I do not do what I want, but I do the very thing I hate” (Rom 7:15). After a time, Paul sees his helplessness before God and cries out, “Wretched man that I am! Who will deliver me from this body of death” (Rom 7:24)? He answers his own question by writing, “Thanks be to God through Jesus Christ our Lord! So then, I myself serve the law of God with my mind, but with my flesh I serve the law of sin” (Rom 7:25). Paul, like the rest of Christians, was in a battle of the mind and the flesh. He desired to obey God but his human nature kicked in and he sinned, like all of us (Rom 3:23). The Bible says that no one is good…not even one of us (Rom 3:10). In fact, the Bible says all of us “have turned aside; together they have become worthless; no one does good, not even one” (Rom 3:12). All of us have earned the wages of death (Rom 6:23a), but God is gracious and offers us eternal life, but only through Jesus Christ (Rom 6:23b; Acts 4:12). We’ll never be good enough to be acceptable to God, so this leaves us in a state where the wrath of God abides on us, particularly if we don’t believe in Jesus Christ (John 3:36).

I remember years ago hearing about a situation where a king faced 5 convicted criminals who were pleading their case before him. One man said, “Oh king, I was setup and I didn’t do it….please see that I am not guilty and that my own friends betrayed me.” Another man said, “I was in the wrong place at the wrong time and was innocent. I never did what I was accused of. Someone else did it and not me.” The other two men gave similar stories, but when the king came to one man, his head was bent low and he cried out as he wept, “I am guilty. I have sinned against my God and against you, my king. I deserve my punishment. I have no excuses. I am guilty and deserve to be here.” Upon hearing this, the king said, “Get that man out of here…he doesn’t belong here,” so they freed him. Not sure if it was a true story or not, but the point is clear. If we confess our sins, we are agreeing with God about our sinfulness. Besides, He already knows about it anyway, so why not confess them? God will deal with those who refuse to acknowledge their sins and have not repented (Rev 20:12-15), so why not admit your sins (as I have) and repent and trust in Christ (as I have)? If you don’t admit you’re a sinner, it’s a sad state, because Jesus came to die for sinners. The Apostle John wrote, “If we confess our sins, he is faithful and just to forgive us our sins and to cleanse us from all unrighteousness” (1st John 1:9), however, if we say we have no sin, John says that we are calling God a liar and the truth is not in us (1st John 1:8), so “If we say we have not sinned, we make him a liar, and his word is not in us” (1st John 1:10). Jesus didn’t die for those who trust in their own righteousness. He came to justify sinners and not have sinners justify themselves (which they can’t anyway).

The Bible says, through King Solomon, “Whoever trusts in his own mind is a fool, but he who walks in wisdom will be delivered” (Prov 28:26). Jesus once spoke to those who trusted in themselves and what they thought was their own righteousness. He told a parable “to some who trusted in themselves that they were righteous, and treated others with contempt” (Luke 18:9), and this parable was a sharp contrast between someone who appeared religious and holy (Luke 18:10-12) and someone who “beat his breast and said, ‘God, have mercy on me, a sinner” (Luke 19:13). I wouldn’t trust the best five minutes of my life to be considered righteous. Jesus had to give His life as a ransom for the many who would trust in Him (Mark 10:45) because they didn’t have the righteousness of God that is required to enter the kingdom, and without the shedding of Jesus’ blood, there would be no forgiveness of sins. What if someone murdered your family and ask the judge for mercy? Would the judge just say, “It’s okay…I forgive you” and then let him or her free? Of course not. That would be a travesty of justice, so God cannot forgive our sins without Jesus’ atoning death on our behalf, but we must repent and believe, otherwise we still have God’s wrath abiding on us (John 3:36b).

May 17, 2017 How Can Christians Be Holy As God Commands Them?
Recent Comments
40 Comments | Leave a Comment
Browse Our Archives
get the latest from
Evangelical
Sign up for our newsletter
POPULAR AT PATHEOS Evangelical
1

On the Pope's Endorsement of Same-Sex...
Cranach
Related posts from Christian Crier