How Do We Make Ethical Choices

I’m not supposed to like Sam Harris – you know, “End of Faith,” Sam Harris, the guy who slices and dices mythical constructions of faith and concludes therefore that religion has nothing to offer. I’m not supposed to like him, but I do. Of course if religion had only mythic constructions of reality to offer, then I’d have to agree with him. But since religion, like everything else, is evolving, I think it’s a bit short sighted to leave it for dead on the battle field of modernist thinking, especially since his book, “Free Will” raises questions of faith so beautifully and describes grace, freedom, and even sin, so exquisitely. Granted, he doesn’t use those words, but he’s talking about them all the same. When he uses the word “sin,” he gets it all wrong. He implies that “sin” is the bad things people do. That’s way too anemic,. But he does describe the human condition quite clearly and so shines a light on the concept of “sin,” even if he doesn’t use that word in that context.

The book is about Free Will and concludes, rightly, that we have none. What? No free will? What about moral choice and responsibility then? You’re not buying it, are you?

In Seminary I was taught that an ethical choice depends upon 1. Analysis of Circumstances: So, someone might argue that war is the only way to oust a particular despotic ruler because circumstances are such that violence is the only language he’ll listen to. 2. Anthropological Assumptions: If you believe that human beings are programmed for war, that this is how the speciessettles disputes then you are more likely to make the decision to go to war. 3. Loyalties: If you are at an ethnocentric level of development, that is, if your loyalties are centered on the tribe or group you are part of, (America right or wrong), then you will make different decisions about war than you would if you are at a worldcentric level of development, for then you have the community of nations as your primary concern. 4. Values: These are things like love, security and honor. Each plays differently as we make our ethical decisions, (or not). The idea is that you can analyze another’s free ethical choice or arrive at your own free choice, using this matrix for ethical reflection.

The trouble is that neuroscientists now tell us that’s not how it works at all. The reality is that the parts of your brain that decide on an action – ethical or otherwise – activate BEFORE the parts of your brain that work out the 4 part matrix. The point is that we decide what we do first, and then we make up the ethical reasoning to go with it later. The decision, as Sam Harris reports the research, is a result of brain activity over which we have no control whatsoever.

Oh dear, what does this mean for the huge Biblical emphasis on law? Fortunately there is a place for law because it turns out that our actions and our reflections on those actions, form a feedback loop. Our reflections on the law, form those processes which are “out of our control” in such a way that we respond to them automatically later. So, reflection on the law or any other kind of moral reflection, has no part in our current decision, but everything to do with our future decisions. I suppose that is why the Hebrew Scriptures admonish us to meditate on Torah day and night. So, there you go; we are responsible to meditate on the law so that our actions are ethical. If we do not act ethically then it is our responsibility for it means we have not meditated on the law.

In Christian circles we call that works righteousness and we have a sneaking suspicion it doesn’t work that way. Sam Harris agrees. Consider: Where does the ethical decision to mediate on the law come from? Answer: Brain processes over which we have no control. Turns out we are completely dependent upon the “grace of God,” or upon that which is driving, (and or pulling), creation forward lo these 13.7 billion years; take your pick.

You want to hear a great description of the freedom that comes when we rely on the grace of God, let me quote Sam Harris: Speaking from personal experience, I think that losing the sense of free will has only improved my ethics – by increasing my feelings of compassion and forgiveness, and diminishing my sense of entitlement to the fruits of my own good luck.

Congratulations, President Trump: You Got Your...
Freelance Christianity
Related posts from Christianity For the SBNR 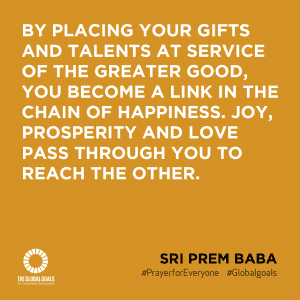 Progressive Christian
Confronting ISIS (or whatever the hell it's called).
Christianity For the SBNR 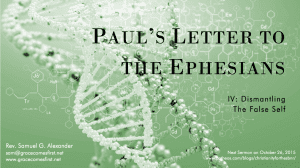 Progressive Christian
Ephesians IV: Dismantling the False Self
Christianity For the SBNR 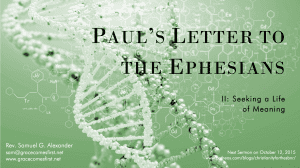