Reflections on Holy Week. Part 3 of 3. –by Jan Coates

This concludes Jan’s three part series on the meaning of Holy Week. 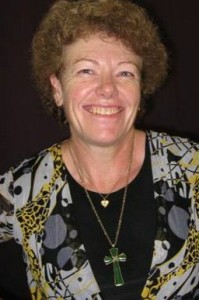 Jan Coates is a married mother of two adult sons (and two cats). She lives in an outer suburb of Melbourne, Australia and is currently completing a Master of Arts (Theology) and beginning a Master of Theological Studies at Whitley College in Melbourne. She considers herself to be a Universalist with Baptist leanings. Jan adores animals, supports animal rescue organizations, and works part time for Blue Cross Animals Shelter in Melbourne.

Friday morning dawns bleak and cold. We’re sitting around the gate to the city. No one really knows what to do. Then that one he trusts most – can’t remember names – comes out weeping. He tries to hide the tears, but they are there for all to see. I grab his hand. He turns, looks at me and falls into my arms. Sobbing, I can barely understand him. ‘He said I would, and I did. I did. He said I would. I did.’ Over and over. I can’t make sense of it, so I lead him back to where I have my room, hoping that he will settle. I just want to get him away from everyone. Stop the embarrassment – but whose embarrassment am I stopping? His or mine? I don’t know. I get him some water, carefully wash his face, give him a drink. He settles down, starts to talk – he’s coherent, but I still don’t understand. Something about the end, how he would deny knowing him. How he was deceived, betrayed, yet he knew it was going to happen. Said it had to. That there was nothing we could do to stop it. ‘Stop what?’ I screamed. What is happening? I don’t know. I don’t understand. This is driving me crazy! What can I do, what can we do?

Pilate’s house – that’s where we need to be. There he is – bloodied, bruised. Dressed in royal robes, a crown of thorns on his head. He must be in so much pain, yet he stands there, unbowed, unbeaten. I reckon his nose is broken, and maybe a cheekbone. His lip is split and swollen, perhaps his jaw is damaged too. Obviously the soldiers have been roughing him up. Nothing we can do.

Hang on. what’s this? A shout. Do we want him released? Of course we do! for crying out loud, he’s innocent of any wrongdoing! He’s never transgressed any law, only done good… but it’s not his name they are shouting. They’re shouting for someone else. Who is it? Some local small time criminal – they want him out of jail, but not someone who has been healing and helping people? I don’t believe it! I shout his name, and find myself surrounded by locals. They look menacingly at me. One says ‘If you know what’s good for you…’ he doesn’t need to finish the sentence. Yet, I cannot say the other man’s name. I walk away, tired, useless, frustrated.

I sit down on one of the many sets of steps on the way out to the gate. This city has so many hills! I put my head in my hands, and wonder about the journey that has brought me here. How hearing a young man in the synagogue has had such a profound effect on my life. How  following him, although not always easy, has brought some wonderful benefits into my life. Wondering where it will all lead to now.

More noise. I look up to see a procession – but nothing like the procession of last Sunday. He’s at the front, just like he was then, but this time there’s no donkey to carry the load. He’s carrying it himself. Bloody great big cross. Surely not… they can’t…no! He cannot be crucified! What’s he done? Why does he deserve such a brutal death? I stand and yell. It’s not fair. Why? Suddenly, hands grab me. I’m pulled toward him. He looks at me. His eyes show defeat. His back is a mass of blood. Oh, my God, he’s been whipped, and they have made him carry this cross on the wounds! I reach out to him, he stumbles. I catch him – I’ve never actually touched him before! There’s a feeling of calm, of patience, of acceptance in his touch. I take the cross – willingly! If only I could spare him the indignity of the death by crucifixion, I would gladly give my life for his! My pathetic, sinful life for his wonderful, healing existence: scarcely a fair swap, but I would do it nevertheless. Where are we going? The soldiers direct me out of the gate; then the burden is lifted from my shoulders. The cross is taken, and forcefully thrust back onto his poor, suffering shoulders. He smiles at me – thanks for the little I have done? If only I could do more. But I cannot. When I try, I am faced with the point of a sword. I back away to the edge of the crowd: a crowd that now smells blood, and is baying for more.

We reach the hill, where all the executions take place. I didn’t notice before, but there are two others with him. Three of them to go up together. They are stripped of their garments. Do the Romans understand that nakedness shames those who look upon it,  not  those  who  are naked? I don’t think so. The crosses are lined up. Each man made to lie on his cross. Wait – hang on – no – they aren’t supposed to nail him onto the cross! He’s just supposed to be tied there. With each blow of the hammer, I wince and cringe.  Yet  he  lies  there  impassively, beyond pain. I wonder if they’ve given him something, some herb to block the pain. But then I see his eyes – those beautiful eyes – wracked with agony. But not a sound emerges from his mouth. He won’t give them the satisfaction! So brave, so strong, so… Words fail me, and I find myself weeping openly.

The sky goes dark. He’s been up there for a while now. He’s said a few things, but not much. Spoke to the guys on either side of him. Then suddenly, he yells. I don’t catch what, because I’ve moved away to give those closest to him some room and privacy. Silence. Deep, deep silence. A soldier goes up and stabs a spear into his side. No movement. He’s dead. What to do? Where to go? It’s so sudden! I find I cannot move. I don’t want to go anywhere. I just want to be near him. I inch closer. There’s some talk. They may be getting him down, putting him into a tomb. I hope so. Should I stay and offer to help? No, there are plenty of closer friends here. I’d just be in the way. I might just try and find out where they are going to put him, and come back later.

Passover was a non-event for me. I couldn’t get interested at all. My mind was on that hill, the cross, the way he died. I’m going to visit the tomb, pay my last respects, and head off home. There’s nothing else for me here now. The tomb isn’t far from the garden we were in the other night. It’s another peaceful place. I linger, looking at the flowers, the sky, the birds, insects and animals. Nothing is out of place. As if nothing has happened. Was it really only two days ago? I follow the directions I was given to the tomb. I only expect to see a rock, nothing else. As I round the corner, my mind full of what to say if I meet anyone, I stop short. The rock is not over the mouth of the tomb! It’s been moved! I peek inside – nothing! What is going on? Where is he? Did someone tell me a lie? Maybe he’s buried somewhere else? I sit down, trying to marshal my thoughts. What to do? Who can I ask? As if conjured up by my thoughts, a man stands before me. He asks who I’m looking for. I tell him – the man they crucified the other day. He’s not here, I’m told. He has gone. I could have sworn he said ‘risen from the dead’ but then I did have a fair bit of wine the other night, and I still feel a bit odd. So, do I go back home, now? I ask. Yes, I’m told, go and tell others the Good News. Good News? You are joking, aren’t you? I ask, but he’s gone.

I take the long road home. I have a lot to think about. He did so much, so much that was good, yet he died. I don’t get it. I don’t understand. But I do feel like I have a reason for living now – not the shallow, sordid, materialistic life I used to live; but a new, clean, loving life. A life illuminated by Jesus Christ, the crucified and risen Son of God.

A 'biblically based process to mitigate...
slacktivist
Related posts from Christianity is Changing

Leaving Jesusland . . . for good
I make no secret, on this blog or in person, of my...
view all Progressive Christian blogs
What Are Your Thoughts?leave a comment
Copyright 2008-2020, Patheos. All rights reserved.