Original Sin With Sprinkles On Top

We took our kids to Disney World for a week of manufactured happiness. Yes, they’ve been having a blast, but they’ve also been more emotional in all directions than usual. Something about this place has an effect similar to drugs like cocaine; whatever your inherent personality is like, at Disney World you’ll be like that ten-fold.

I made the grave mistake of suggesting we eat dinner last night at a theme restaurant called T-Rex. My son, Mattias, loves dinosaurs, and had been naming every creature by its skeleton as we walked by the day before, so I thought it would be fun.

It was theme restaurant hell.

After an hour of animatronic distractions to keep us from noticing the fried pizza dough chicken sandwich was barely edible, we evacuated. Papa Mark treated everyone to ice cream at Ghirardelli, which sounded like a good idea. But it turns out that ANYTHING following the input of T-Rex that doesn’t involve heavy sedatives and bed is a mistake. 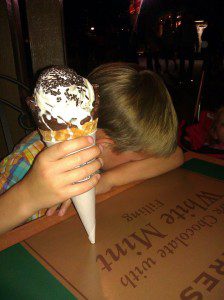 The place was tiny and packed with people, which made it about as noisy as T-Rex, but with sugar-hungry humans as the source of the racket instead of robotic dinosaurs. Amid the noise and confusion, Mattias ordered a cone with rainbow sprinkles. The end product, as you can see in the picture, didn’t precisely live up to his expectations.

This is where a little circuit in my brain snapped. Here we are, in the middle of the “happiest” friggin place on the planet, my son has an ice cream cone as big as his face melting in his fist and he’s too distraught to eat it. Have I utterly failed as a parent or what?

I posted the picture on Facebook and I got a number of empathetic comments. Then a friend of mine, Nadia, posted, “I never believed in original sin until I had kids.”

After a dry chuckle to myself, I thought more about what she said. I’m still not an original sin advocate, but I completely get what she’s talking about. In the second creation story of Genesis, God provides everything humanity would need and then some. Our response: let’s press the envelope and see if we can screw this up. A seminary professor friend named Brian Feille called this “The Tyranny of the Unpossessed.”

This phrase has stuck with me ever since. Give us an immaculate garden and we’ll stick our necks through the barbed wire fence to check out the grass on the other side. Give a kid an ice cream cone in the middle of his dream vacation and he’ll find a way to be miserable about it.

This isn’t to say I haven’t screwed up as a parent, but it is helpful to recognize that this unattractive behavior is inherent in his nature. I do the same thing. We all do. And it’s a lifelong climb back to the painstaking discipline of living daily in gratitude.

Long story short, he got over his crisis and downed the less-than-perfect confection in the end. He went to bed with a chocolate goatee as evidence that the disappointment wasn’t exactly a permanent psychic scar he would never get over.

But today is the Magic Kingdom. I’m sure we’ll find some other wonderful things to be miserable about. Here’s to human nature.