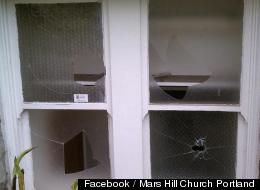 I had a stew of emotions when I read about an activist group in Portland calling itself the “Angry Queers” vandalizing a satellite church of Mark Driscoll’s Mars Hill network. Neighbors in the area reported seeing a handful of young people in black masks smashing stained glass windows and damaging other property on the church campus early Tuesday morning.  A group called the “Angry Queers” sent a letter to a local news affiliate taking responsibility for the damage.

I get the anger. I feel that anger when I read things that pastors like Mark Driscoll say about the LGBT community. It’s wrong and it should be confronted publicly.

But please, for the love of God and one another, not like this.

Local pastor Chuck Currie, known for his vocal criticism of Mars Hill’s theology and portrayal of women and the LGBT community, is right in calling for this to be treated as a hate crime.

“If Mars Hills Church represents the worst of Christianity,” said Curry in a recent Huffington Post article, “and I believe it sadly does, those response for this attack represent the worst of Portland.”

There is such a thing as righteous anger, and we all should call one another to account when we treat individuals or groups as “less than.” But such

a response actually serves an opposite purpose from what I believe was intended. By noting that the vandalism changes nothing about the church’s mission, Mars Hill ends up being the more tolerant party in this case. Granted, they’ve stopped short thus far of publicly forgiving the vandals, but they’re not returning the violence with an equal dose of anger.

It also compromises the entire face of the pro-LGBT movement. It serves to reinforce the stereotype some have of LGBT people as somehow beyond the bounds of “typical” Americans. From my perspective as a straight male of some privilege, I can’t, for the life of me, see how anything about this stunt helps further the cause of the Gay/Lesbian community or to call Mars Hill to account for their intolerant rhetoric.

I tend to believe that violent responses to injustice point to a lack of imagination. It suggests that the angry party can’t see any way out of their situation other than with aggression or violence. But in my experience, it’s the creative, nonviolent responses that truly end up making a more lasting impression on the public. Author and theologian Walter Wink has influenced my thinking about this more than anyone.

Wink says, as I’ve talked about in previous articles, that we often look at injustice and assume we have two options: do nothing or respond in kind. But by acting like that which we consider wrong, we become more like it. Think of Luke Skywalker in Star Wars, who cuts off Darth Vader’s hand, only to find that his own hand has become the very one he struck on his enemy. Wink also proposes that, in doing nothing, we tacitly condone the wrong that we would otherwise call to account.

Fortunately, Wink finds a third way in the life and teaching of Jesus. I’ll not hash out his entire proposal here; for a more thorough discussion of Wink’s third way, click the link to the earlier article above. But I do want to share a story that, though I’ve told it before, is worth sharing again.

I am part of a denomination called the Christian Church (Disciples of Christ). Yes, the parentheses are actually part of the name. Every two years we have a gathering called the General Assembly, where all Disciples are invited to come together to worship, learn and share stories and a meal. It’s pretty cool to have thousands of Disciples and squashed into one city at the same time. But at times, it also draws some negative attention.

Several years back, when we were meeting in Kansas City, Fred Phelps’ Westboro Baptist folks showed up to protest our denomination because some of our congregations ordain LGBT clergy. The Westboro folks are notorious by now for picketing military funerals and grabbing attention in some of the most unlikely – and generally unpleasant – contexts. They also tend to verbally antagonize folks with the hope (yes, really) that someone will assault one of their members. They, in turn, sue the assailant, which in turn funds their strange little church.

This is a perfect example of the negative consequences of a lack of creative imagination when it comes to responding to injustice. The Westboro folks have actually figured out how to exploit that deficit of creativity for personal gain. It’s abhorrent, but we do always have a choice.

When they showed up to our Assembly in Kansas City, I got a little taste of their strategy first hand. As I waited to cross the street, one of the protesters started calling me names and getting up in my face, though very careful not to actually touch me. Wary of my short fuse, Amy quickly grabbed my arm and took me in a different direction. But I could see the immediate appeal of laying one of them out on their ass.

But leave it to our younger folks to show us all a “third way.” they gathered a couple dozen youth across the street from the hollering picketers and began to sing to them. They didn’t make fun of them, or call them any names. They didn’t even address them directly. They just sang some of their camp songs and then left.

Their response inspired me, as evidenced by the fact that I’m telling the story some ten years later. It was a small, simple gesture at the time, but it’s funny how simple, Christlike responses can have unexpected, amazing and lasting effects.

Don’t believe me? Go back and read the stories about this guy named Jesus and his handful of followers who wandered around by foot, helping people, telling stories and living out this strangely unnatural “third way.”

Fast forward two thousand years, and I’d say that relatively simple ministry made a difference. And per Jesus’ explicit instruction, not a stone was cast in the process.

It is possible; we just have to have the willingness and capacity to imagine it.