Dead Presidents, Negroes With Guns and the NRA

I’m not a gun guy. I got turned off by guns the one time my dad took be to a gun range and let me try out his Ruger. It was deceptively light, made of some kind of polymer. It felt more like a toy than a weapon with any real power.

Then I pulled the trigger.

The recoil made my wrist and shoulder tingle, and not in a good way. I’ve always been averse to sudden, loud noises too, so the sounds in such a small, closed space didn’t help either. I fired off enough rounds to ensure my dad I wasn’t afraid of the thing (even though I kind of was) and gave it back to him. I’ve never handled another firearm since.

That said, I know plenty of reasonable, kind, law-abiding people who carry guns. One guy, a pilot, needs to be able to handle a firearm secured in the cockpit as part of his job. Others are hunters, police officers and former military. For them, the gun is not a status symbol. It isn’t a tool used to intimidate or threaten. Unless you know them well, you probably wouldn’t ever know they even carry guns.

And all of them are members of the National Rifle Association. 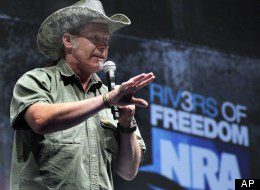 However, like many groups (organized religion included), these are not the spokespeople for the whole body that we tend to see. Rather, it’s the bombastic wing-nuts like Charlton Heston who can certainly grab headlines, but not necessarily always in the way the constituency would prefer to be represented.

Enter right-wing rocker Ted Nugent and venomous lightning rod Ann Coulter, neither of whom have done any favors this past week to the NRA by speaking their mind.

Following is from a recent Huffington Post article about Nugent’s radio interview at an NRA convention:

Rocker Ted Nugent has reportedly earned himself the scrutiny of the Secret Service after saying over the weekend that he would be “dead or in jail by this time next year” if President Barack Obama is re-elected.

Nugent made the comments during an interview at the National Rifle Association convention in St. Louis, comparing Obama and his administration to “coyotes” that needed to be shot and encouraging voters to “chop [Democrats’] heads off in November.”

And then there’s Ann Coulter, who I’m beginning to believe doesn’t even take herself seriously. Consider the following excerpt from a column Coulter wrote on her website called “Negroes With Guns”:

We don’t know the facts yet, but let’s assume the conclusion MSNBC is leaping to is accurate: George Zimmerman stalked a small black child and murdered him in cold blood, just because he was black.

If that were true, every black person in America should get a gun and join the National Rifle Association, America’s oldest and most august civil rights organization.

I’m sure African-American leaders feel much better having Ms Coulter in their corner. 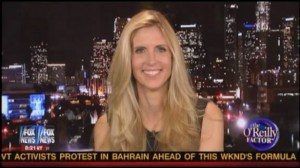 It’s really no wonder that many in the general public perceives the NRA as a right-wing extremist group bent on creating divisions in society where there aren’t any, and preying upon the fears of an us-versus-them dichotomy constructed by their own constituents.

I tend toward a more libertarian view on social issues, including those with which I personally take issue. But stories like these make it a lot harder to feel sympathetic toward those concerned with preserving their interpretation of the Second Amendment.

Beyond that, this kind of absurd rhetoric dumbs down the entire national conversation, forcing an already gaping divide between groups holding differing views even further apart. We’re better than this.

Congratulations, President Trump: You Got Your...
Freelance Christianity
Related posts from Christian Piatt