From “Mad Men” to “Girls” – The Evolution of Sexism 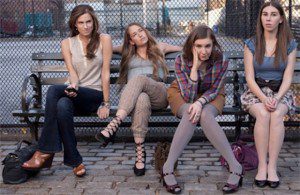 Her fearless transparency and clever knack for witty dialogue make the show instantly compelling. I already felt like I cared what happened to these wayward New York drifters, straddling the gap between a protracted adolescence and some unreachable ideal of adulthood.

Following that half-hour premiere, my wife, Amy and I went a few years back to the first episode of /mad-men”>Mad Men, the perennial buoy of the AMC lineup. Unlike the real-time vibe of “Girls,” “Mad Men” takes place in the same city (but distinctly different income bracket some sixty years earlier.

Two things leap off the screen while watching the debut of “Mad Men;” first, everyone drinks and smokes. All the time. Second, women are treated like so much property, and though they seem complicit in their subjugate role, they also have a racket of their own going, using their feminine wiles to work their way up alongside the mean of greatest means and power to enjoy both by association.

It’s hard to believe only two generations ago that an executive was within his purview to suggest to his secretary that she hike up the hem of her skirt a bit and fetch him some fresh ice for cocktails with the boys. 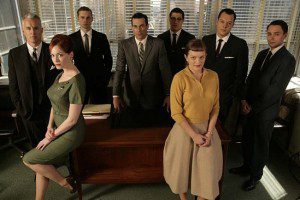 Reflecting on the characters drawn in “Girls,” all of the men, regardless of age, come off more or less as benign but well-meaning doofuses. It’s the women who have the lion’s share of the brains in this medium, and they even tend to bully the boys around a bit. But though they’re pushovers on the surface, it’s still the men who have the power in this twenty-first century cultural snapshot.

Hannah Horvath (Lena Dunham) gets canned from her no-pay internship by a guy who dismisses her year of work with a kind smile and a handshake at her first mention of deserving a paycheck. She also puts herself at the sexual disposal of slacker shirtless wonder Adam Sackler (Adam Driver), who does everything but pay her for her services. And finally, Horvath’s roommate, Marnie Michaels (Allison Williams) continues to sleep with a boyfriend she can’t stand, simply because he pays most of the rent.

I couldn’t sleep last night, thinking about the parallels. Despite sixty years of separation and supposed progress, men still hold the reins. And in both cases, women either have to toe the line established by those men to get along, or they have to use their sexuality.

Of course, both are oversimplified portrayals of reality in some ways, but both also speak to a deeper truth. And it’s one that those who claim that the playing field has finally leveled may easily accidentally miss or consciously dismiss. Yes, women have made progress, but the same sexism that defined Madison Avenue in the fifties is still around.

April 16, 2012
Top Five Stories from the Past Month
Next Post