I came across a couple of interesting articles today, both of which other folks sent to me. I get a number of things forwarded to me, most of which I don’t get a chance to read thoroughly. But since I’m on vacation, I had all kinds of time to sit, read and simmer on them.

And to be honest, I took the whole “seventh day” sabbath thing pretty seriously. I didn’t do crap today. You probably don’t want to read about be doing nothing, so instead, we’ll go with the articles. actually, I’ll take on one today; assuming there will be another day on this trip when I do little to nothing, I’ll save the second one for then.

The first story came from my friend, Andrew, who considers himself marginally religious, if at all, but he is a regular follower of my stuff. The article he sent cites research that found that atheists are more compassionate and generous than highly religious folks.

Actually, this doesn’t surprise me. Back when I waited tables, the Sunday after-church crowd was the absolute worst of the week to wait on. They took forever, were super picky, were terrible tippers and tended to be the most critical customers I had. It really killed me when, instead of leaving a tip, they’d leave a tract on the table. If you’re not familiar with these, they’re little booklets that some Christians pass out to try and save people. They justify substituting this for money because saving my soul is a far greater gift than a couple of dollars.

Well, I’ve got news for you. Last time I tried to pay rent with a tract, my landlord wasn’t impressed. Second, that assumes an awful lot about me, my beliefs and my needs, doesn’t it?

I’m digressing, but the point is, I identified with this article just by the title alone. It actually reminded me of this church sign that I’ve posted before, but which warrants a second look: 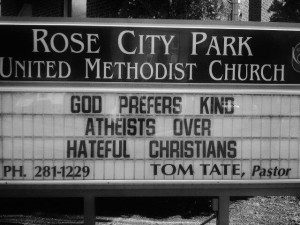 Another friend of mine, Paul, posted the following reflection about why this somewhat counter-intuitive phenomenon might be. He said:

When religious people do “good things” they are often doing so in conditioned response to an ethereal reward/punishment set of beliefs. When non-believers do “good things” its because they want to do them.

Tragic if true, but I think Paul might be onto something. I should note that Paul is involved in ministry like me, so he’s not throwing stones from a distance.

I also wonder if it has something to do with the comfort that comes with being part o the cultural majority. Yes, there are Christians who will claim we’re part of a persecuted minority, but that’s simply ignorant. Christians have had the lion’s share of power in this country for a long, long time, and it shows in our attitudes. We assume that what “we believe” is normal, and that anything else is an aberration. The result of this is that anyone who doesn’t claim to be a Christian is made much more aware of it because of their difference.

Fact is, we don’t think about who we are and how we act nearly as much when we’re the ones in control.

Atheists, on the other hand, are fairly regularly persecuted (socially at least) for their lack of belief. They are made quite aware of their atheism, either because of how they’re treated for it, or because they have to keep silent about it for fear of being ridiculed. So perhaps with this tendency to be more self-conscious comes an equally more self-aware set of behaviors and attitudes.

Put another way, if you’re part of a group that is stereotyped in a negative way, you might go out of your way to act differently, even at an unconscious level, to try and defy that stereotype.

I could be reaching here, but I think there’s something here that’s basic to contemporary human nature. So although I don’t think there’s anything inherently better or worse about an atheist brain or heart than a Christian one, I do expect that atheists may work a little harder to convince the rest of the culture around them that they’re decent, loving, caring people, regardless of whether they believe in God.

Is this a case for atheism? An indictment of Christianity. Not really either, I think. If I’m right, it tells us more about the power of cultural norms, the potential negative (but relatively invisible) effects of majority consciousness, and the responsibility of those with the privilege of being in the majority to go out of their way to act against the negative effects of such privilege.

All I know is that, when someone tells me I defy many of the common expectations they have of Christians, I take that as a compliment. I wish it wasn’t the case, but it’s clear from the empty seats in many of our churches that we have done an awful lot of this to ourselves.

May 9, 2012 To the Edge of the Earth (Day Eight)
Recent Comments
7 Comments | Leave a Comment
Browse Our Archives
Follow Us!