A Theology of America’s Zombie Apocalypse

It seems that America is on the verge of a zombie apocalypse.

First, Ronald Poppo had most of his face eaten off by Rudy Eugene, and now, Alexander Kinyua reportedly killed his roommate, Kujoe Bonsafo Agyei-Kodie and then ate his heart and part of his brain.

Is it just coincidence that this spate of violent attacks comes when the county’s fascination with zombies is at its height, or is there a connection? 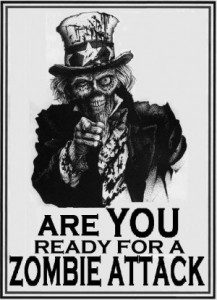 From movies to video games, Zombies are the big ticket these days. The undead top the media charts, gnawing and clawing their way into the forefront of our imaginations. Move over vampires; Zombies are the new black.

It’s hard to say if the pop culture popularity has influenced similar copycat killers, or if the zombie craze simply has made us more sensitive to similar real-life stories. Either way, both the fictional tales and actual news items may speak to something going on in our collective imaginations.

At the risk of over-analyzing (that’s kind of my thing anyway), there are two common themes between both the popularity of both vampires and zombies in mainstream media:

The explosion of social media’s popularity speaks to the first point, I think. In some ways, we’re more connected than ever. But with our highly mobile lifestyles, fractured nuclear families and rapidly accelerating schedules, we wander through life sometimes not unlike the waking dead. We’re surrounded by people all day, every day, and yet we long for connection. We want to feel something. We crave meaning.

As for the second point, I tend to think this points to the mentality of our nation ever since the events of September 11th, 2001. Whereas, in the days of the World Wars, the “good” and “bad’ guys were clearly delineated, the current state of international conflict is much more opaque. The Enemy could be the person right next to us. The threat is everywhere.

Combine these two phenomena with our perpetual desire for pop culture distraction, and you have the resurgence of vampires and zombies in the zeitgeist.

Since I’m a “God Nerd,” I suppose the implicit question now is: where does faith, church and/or God enter into all of this?

At its best, faith communities provide just this. We offer the world an authentic experience with something greater than ourselves and a community of 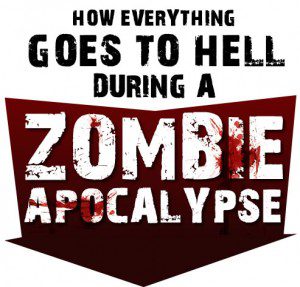 support that multiplies our joys and shares in bearing our grief. We help orient one another toward hope and bear witness to one another’s lives. We dream of being famous, wildly successful and universally adored, but really, we want to know that our lives matter.

Second, we offer an antidote to an epidemic of fear that plagues our daily life. From our health and waistlines to climate change and terrorism, there’s plenty to obsess about. It’s easy to convince ourselves that everything is falling apart, but deep down, we long to be liberated from that fear.

But our default mode is “worry.” Living with contentment and peace is often a discipline that must be practiced rather than something that comes naturally. And again, at our best we offer such liberating practices.

But just in case, you might want to keep a healthy supply of garlic, wooden stakes and zombie spray handy. You know, just as a precaution.

June 3, 2012 Church Sign Epic Fails, Volume Sixteen
Recent Comments
17 Comments | Leave a Comment
"awesome."
Brandon Roberts Not “That Kind” of Christian
"nice article."
Brandon Roberts Talking Sex with Invisibilia’s Hanna Rosin
"Thanks for a fun romp. As a Presbyterian minister, I would have welcomed you gladly ..."
Zeigler John Leaving A-Holiness Behind
"Dear Sarah and Christian,I'm sorry for what has happened to you and your mother and ..."
Amazingaljicrowley3679 Letter From a “Demon Possessed” Woman
Browse Our Archives
get the latest from
Progressive Christian
Sign up for our newsletter
POPULAR AT PATHEOS Progressive Christian
1

How come I can't see you...
slacktivist
Related posts from Christian Piatt