There have been lots of news stories lately about student loan forgiveness and the like, and as the holder of serious five-figure graduate student loans, you’d think I’d follow the discussion closely.

But to be honest, I haven’t paid much attention for one, possibly cynical, reason; the systems isn’t going to change.

I joke sometimes that my dream is to pay off my student loans before I retire, but to be honest, that probably won’t happen. It wouldn’t surprise me if I have them with me the rest of my life.

I know, typical twenty-first-century young adult nihilism, right? Maybe. But my monthly payments are already the second largest bill we have next to our mortgage. Still, the payback time line spans many, many decades. I’d like to believe that those in power have the necessary motivation to change things, but here’s why I hold little, if any, hope they ever will.

Throughout grade school, we’re told that the most important thing we have to do is to go to college. We don’t talk much about why, except that it will help us get a “better job.” And generally when we are talking “better,” this is synonymous with more pay.

I don’t know about everybody else, but I waited tabled for my first year out of college. Never mind that I had done all of the experience-building, resume-plumping jobs in campus life during college, while also maintaining a part-time internship with a record company more than sixty miles away. When it came time to actually give me that paying job I’d been working toward for so many years the only one answering the call was TGI Friday’s.

Meanwhile, the undergrad loans kicked in, and I had to start paying them. I did negotiate a forbearance for a while, but that just means they keep piling the 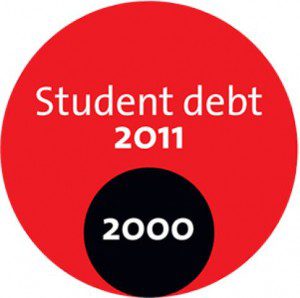 interest onto the already growing principal until you can actually afford to pay. So the longer I waited, the more I owed. As the forbearance expired I had to take something – anything -else that would help me keep from defaulting. So I added some telemarketing to my growing list of jobs. I sold everything from carpet cleaning to nightclub parties, making just enough from my second job to cover my COBRA insurance premium and the new student loan baby – um, I mean bill.

It’s not that I mind the idea of paying my dues, per se. For one summer in college, I cleaned out condemned apartment buildings, complete with crack spoons and human waste. But can someone please remind me why it it that I went to college if I was going to have to start out by waiting tables, telemarketing and doing garbage removal? Had I done those same jobs at age eighteen instead of twenty-two, I’d likely have been a supervisor or owned my own business by the time I finished college. I’d have enough practical experience to hopefully give me the juice to get an office job or whatever those elusive “good jobs” were they kept talking about in my high school counseling office.

Ah, but the people in the HR departments want to see that you’ve graduated from college. They may not be sure why, except that it’s the industry standard. And here’s the thing: our economic system benefits from things staying basically the way they are.

Student loans are good for the banks, because they get huge loans on the books, often backed by the government, on which they’ll get paid for a generation or more in most cases. They’re good for the higher education institutions because they can continue charging far more than any typical family can afford, as long as people keep accepting that going into significant debt for your education is not only normal, but also smart. And believe me, I heard the term “smart debt” used more than once in reference to my student loans. 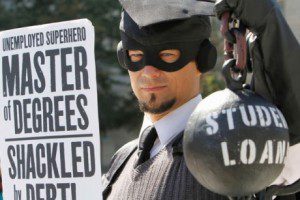 The indebtedness is, I would argue, good for the private sector too. If we come out of college or graduate school with a loan hanging over us like Damocles’ sword, our first priority has to be getting a job that will cover that debt. We have less flexibility in being pickier about careers based on what we really want to be doing, focusing instead on paying down the loans. This drives highly educated young graduates into relatively menial jobs they might not otherwise take, simply because they need the money.

I know this is a gross oversimplification in some ways, but there’s an element of truth to it at every turn. The cost of higher education is a form of indentured servitude into which we’ve sold more than a generation of young people now. And although it may ultimately lend some broader benefit to the economy as a whole it is on the backs of those lacking power or voice to make the system change to their advantage.

The Bible gets it right when it says the borrower is slave to the lender. We’re selling our children into a form of economic slavery, all because it’s become socially acceptable. But like racism, smoking, driving without a seatbelt or (hopefully) homophobia, the only thing that promises real change is for the truth of the repugnant nature of such indentured servitude to become more broadly recognized by the public as such.

It’s a moral crisis that will haunt us for decades until we do.

June 9, 2012 David Barton: You're Poor Because You Don't Read the Bible
Recent Comments
4 Comments | Leave a Comment
Browse Our Archives
Follow Us!