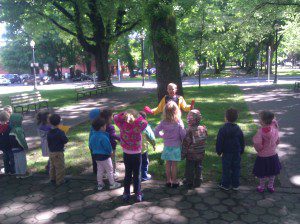 It started with a few pieces of construction paper.

If you’ve been following my blog at all over the past few months, you know that Amy and I recently moved our family from Southern Colorado, where we planted a church eight years ago, to Portland, Oregon. Though we’re still doing ministry, it’s a completely different kind of work. Now we’re at a 133-year-old church in the heart of the city. The facility is incredible and the history of the church spans generations. But with that comes a good deal more administrative work than either of us is used to.

We found a preschool for Zoe right away. In fact, the first day she told us that we needed to leave and let her do her school thing. She’s the kind of kid who blooms wherever she’s planted. Mattias, our eight-year-old son, is a little more complicated. Aside from him having Asperger’s, the schools here don’t get out for a couple of weeks yet. This means not only that he has no other kids his age to play with, but also that the typical summer activities we could enroll him in don’t start until mid-June. The result: he gets to spend some pretty long days with us at the church. 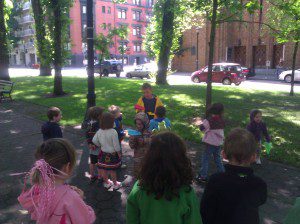 Most times, he makes the best of it. He’s figured out how to navigate the labyrinthine halls by scooter, and he has plowed through more cartoons on the iPad than is healthy, I’m sure. But we have to work and we have no other options for him. So far, we’ve all managed.

But yesterday afternoon, he’d had enough. He looked up from his chair on the other side of Amy’s desk with tears filling his eyes. “Mom,” he said quietly, “I’m so bored.” There are plenty of adjectives that describe Mattias, but quiet isn’t one of them. So you know when his voice reduces to a whisper, he is really being sincere.

Amy came down and stuck her head around the corner into my office. “We’re going across the street to throw paper airplanes in the park, she said. “want to come?”

Mattias has a remarkable ability when it comes to making paper airplanes. He has a book that illustrates all kinds of different designs. All he has to do is look at one for a minute or two and then he can replicate it exactly. And he does. Over and over and over again. We’ve gotten to where we had to start putting limits on how many pieces of paper he was allowed to bogart from the printer every day. If I didn’t recycle at least half a dozen planes each day, I’m pretty sure I’d be up to my neck in the things. The church secretary had given him some different colored sheets of paper from the supply closet to keep him busy, and of course, he turned them immediately into planes.

Turns out it’s not so easy to conduct a conference call while being stabbed in the head repeatedly by airplane.

We had all had enough of the office for a while, so we went to the park to fly planes. Within a couple of minutes a gaggle of little kids from a nearby 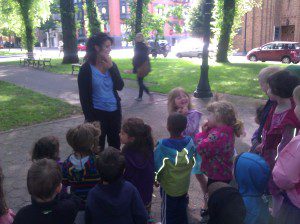 preschool wandered by and stopped to watch Mattias’ aeronautical skills with awe. Mattias let one of the preschoolers nearest to him give one of the planes a toss, and pretty soon, he was surrounded.

A minute or two later, another group of kids joined them. Passersby were both stopping to watch the display of this eight-year-old pied piper amid the sea of little people, while also ducking and dodging the paper projectiles as one got hurled their way. It was a beautiful thing to watch. Mattias soaked it up. He was a god to the preschool kids. While all the planes were airborne, he would start making goofy faces or telling them knock-knock jokes. I’m pretty sure they didn’t get the jokes at all, but they laughed on cue anyway.

While he entertained the masses, we chatted with the care providers. Joe was a student at Portland State who had cared for some of these kids since they were newborns. You could see the love he had for them in the way he looked at them and stroked their heads as they came over for a reassuring hug.

“I should thank you, by the way,” he said. “Someone at your church told us we could use your courtyard to let the kids run around. We don’t have much space here in the city, so that was great to have another option for them to get their wiggles out.”

“What do you do when it’s raining?” Amy asked. Joe shrugged. “You know,” she said, “we have a full-sized gymnasium on the second floor that isn’t used most of the time during the weekdays. If they need a warm, dry place to run around, just bring them over.” We exchanged contact information and went back to watching the kids swirl around Mattias in noisy bunches. 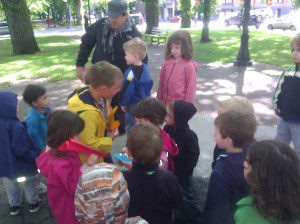 It doesn’t sound like much, I know. But it took us getting out from behind our desks, going right outside our doors and connecting with the people right there around us to make something beautiful happen. Will any of those kids and their families end up coming to Sunday worship? Will Joe show up in the back pew next weekend? Probably not. but we made a connection. We walked around, noticed the people around us, recognized a need they had and offered what we had to help meet that need.

Sometimes we want to believe that a new ad campaign, worship service or big, expensive mission trip will give us the charge we need to turn things around in the church. But what if the real revolutions take place a little bit at a time on the streets, right in front of us.

We went back to the office to wrap a few things up before heading home for the day. All of us were smiling. Mattias was at least three inches taller, and the tension I had felt building between my shoulder blades had disappeared. Amy took a deep breath and smiled.

June 5, 2012
Rebel Nuns: When the Faithful Stop Obeying
Next Post