When All the Church Can Say is “I’m Sorry”

Two weeks after we arrived in Portland, Amy (my wife and new senior pastor at First Christian Church in downtown Portland) decided she needed to do something meaningful to express her voice as a person of faith in the community. There already were the folks handing out tracts down on the campus of Portland State University, which is definitely not us. There were plenty of community leaders to meet, hands to shake and even media outlets to connect with so we’d have a better handle on key circles of influence.

But none of what was really what we had in mind.

The annual Pride fest was taking place that weekend along the banks of the Willamette River, and we knew we should probably go. Folks in our new congregation are in various stages in their journey of discerning where they are with regard to sexual orientation, but overall, it’s an incredibly open and loving place for all people. There are gay singles and couples who attend regularly, and who participate in leadership and other ministries like everyone else. But the fact of the matter is that most people outside the walls of the church don’t know that. And honestly, how will they ever know if we’re not willing to tell them?

Better yet, why not show them?

It’s one thing to tell people they are welcomed and loved, or even to show them with action. But too often, I think even the more open faith communities want only to look forward, without acknowledging the profound damage that has been done to so many in the name of God and their own faith. 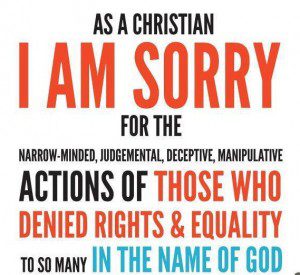 As all of us learned back in Kindergarten, though, saying you’re sorry is a necessary step toward healing. It’s not fun and it can be incredibly vulnerable, but it’s that kind of vulnerable humility to which we are called both by the words and deeds of Jesus. So why do Christians seem to have such a hard time actually doing it?

For some it’s a matter of fear. They don’t want to be judged, ridiculed, taunted or singled out. Well, join the club, because plenty of folks have felt they were on the receiving end of such treatment by the church for far too long. For others, it’s a matter of accountability; they simply don’t see why they should apologize for something they may not have done personally. But if we’re truly all part of the same Body, if we’re in covenant to hold ourselves mutually accountable, then when one transgresses, we all bear the burden of making it right. And for a few, it’s a simple matter of ignorance. They are so comfortable in their own Christian bubble that they don’t even realize such damage is being done in the name of the faith they claim. But again, it’s incumbent on those of us who do know it’s going on – all the time, mind you – to educate them.

That’s why Amy had the sandwich boards made. They were based on a billboard a pastor friend of our named Rich McCullen created and posted near his Mission Gathering Church in San Diego. We knew the second we saw it that the message was both brilliant and necessary. They nailed it. But we wanted to take it a step further. To physically wear such a sign around town, especially at a Gay Pride festival, is pretty disconcerting. People might laugh. They might spit at you or even assault you. Granted, we did have our kids with us, but if someone had particularly strong feelings about it, there’s no telling what they might do.

After all, any true Christian knows that sticking with your convictions and carrying them with you, even when it’s not convenient, can carry a very heavy price. But that’s when it’s most important.

It was a good thing that she had the sign placed both on the front and back of her body, because some people didn’t really want us to know they were reading it. They’d wait until we passed by, the do a 180 and gawk at the words in bright red letters. We kept waiting for the first verbal salvo, but they never came. In fact, people started coming up and asking if they could take a picture. Some put their arms around her and had friends snap photos for their Facebook page like she was a celebrity. Others offered a quiet but heartfelt word of forgiveness. Some cried. Others gave her high-fives. Some even stopped what they were doing to share stories about their own pain at the hands of Christians.

The whole experience was exhilarating, partly because it started out being utterly terrifying. It could have gone very differently, and in a different context, it still might. But that doesn’t mean that more people don’t aren’t dying to hear those simple words of apology.

I’m almost to the point that I’m convinced no Christian, Christ Follower, Disciples or whatever they call themselves has any right to share their story of faith with others unless they’re willing to start with a humble and sincere apology. It’s a little bit emasculating, and it places us at a distinct power disadvantage with the person to whom we’re speaking. But that’s just the point. So often we reach out, emboldened and armed with the truth, and with the full force and conviction of our church behind us. But that’s not the kind of messiah we claim.

Yes, people called out to Jesus to save them, and he did indeed offer salvation. Just not in the way they had expected. They longed for a conqueror to ride in, kick ass and take names, but instead he arrived as the Suffering Servant, vulnerable to the worst that humanity could bear to heap on him.

It was only in doing so that he could truly affirm his message that LOVE WINS. Other, more aggressive approaches might have left a greater short-term impact, but they would not have set the context for a faith founded upon the principles of peace, love, compassion and reconciliation. I don’t consider myself any kind of fundamentalist, but when it comes to the call of every Christian, it is the only way.

And at least on that one day on the riverbank in Portland, it worked.