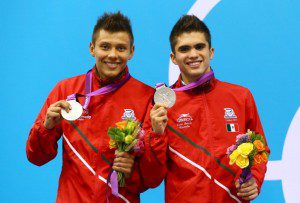 I’m an Olympics junkie. Not only that, but I’m also  most ardently pro-American when watching them. My wife, Amy, and I were watching synchronized platform diving two nights ago (honestly, when else would we do that??) and she said she was kind of pulling for the team from Mexico to medal, even though it might mean pushing the Americans out of the running.

“What the hell are you talking about?’ I said, more than a little incredulous.

“We win so much already,” she said. “This is a rare chance for Mexico.”

“If you root for another country,” I grumbled, “the terrorists win.”

I’m usually a fan of the underdog, and I’m not exactly a sports fanatic, but something about the national zeal, combined with the athletic excellence, brings it out in me.

Of course, there’s a part of all of us that loves a winner. There’s a reason why so many people wear the jerseys of their favorite teams or players (way more when that person or team is on top than not, by the way), why we revert to a sort of tribal level of passion, painting our faces, screaming rabidly, and why we practically make a religion out of our sports. At one level, it’s inspiring to see someone achieve what appears to be unattainable. The idea of doing what most Olympians do – or all professional athletes, for that matter – is hard to comprehend. But when we get to witness it, it serves to embolden our faith in humanity a little bit.

Yes, we screw up a lot, we fight each other and we’re warming up the planet at an alarming rate. But once in a while, it’s transcendent to watch someone do something amazing, 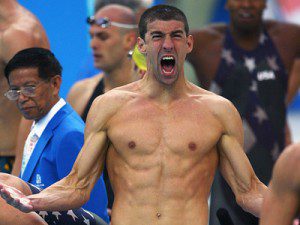 Then there’s a baser drive at play too. After all, if it was just about athletic ability, inspiration and beauty, we’d have no need for medals and the whole “competition” thing. We love winners particularly because there are losers. In fact, the more losers there are, the sweeter the winners appear. I expect this taps into some very basic evolutionary stuff for us. Though we don’t toss people into gladiator forums to fight to the death any more (though we get pretty close), we love to pit two individuals or teams against each other to fight it out in an all-or-nothing decision.

We shower the victor with adoration, attention and treasure, while the loser, no matter how slim the margin, fades into obscurity.

Why? Because we crave a means of determining who is “the best,” so that we can identify ourselves with them. Once we know Michael Phelps, the New England Patriots or whoever are the best, we can buy their uniform, eat their cereal and drink their sports drink, all the while, feeling like we possess a little piece of them.

Oh without all that work, practice and emotional tribulation stuff.

It’s not unlike making an alliance with the pack leader, really. Once we know who the alpha is, we know who to cozy up to so we ensure our own safety and survival. It’s funny that, on one level, sports can be so inspiring and transcendent of the basic human condition, while also appealing to our most primitive selves at the same time. No wonder they’re popular. 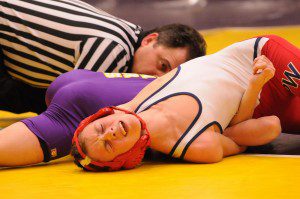 The one thing that irks me is when people thank God after they win. I’m not sure why it irritates me, because scripture urges us to give thanks in all things. But there’s something about it all that suggests God plays favorites, that God loves winners more than the ones who lost. I understand feeling caught up in the excitement of the moment and wanting to offer some word of thanks to God, but the way we marry this with victory plays into a perception of Christianity in our culture that I’d rather shed.

I’m not saying that God isn’t on the side of those who emerge victorious. Look at David, taking on a big warrior with a kid’s toy, or Solomon, for that mater. That guy was pretty successful. But for the most part, God – and Jesus in particular – seemed to be fond of the less-than-stellar folks. Peter was quite the screw-up, yet God built the church with him. Paul wrote much of what became the New Testament, and in addition to having a spotty track record, he clearly wrestled with demons his entire life.

Then there’s Jesus, hanging out with the losers, the sick, the criminals; the kind of folks you would not likely see climbing to the top of the medal stand.  And although I’d love to identify as often as possible with the big winners, more often than not my heart lands in the losers’ camp too.

And if you’re a fan of come-from-behind victories like the ones so often celebrated in the sports world, you can’t really do much better than Jesus.