Is Our Debt to China the Key to Global Peace?

Is Our Debt to China the Key to Global Peace? October 10, 2012 Christian Piatt 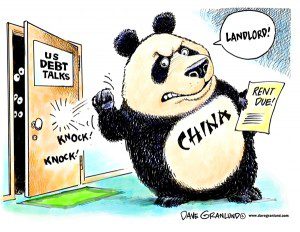 We’ve been hearing an awful lot about the national debt lately – particularly during the current election cycle – and specifically we’ve gotten an earful about the problem of our enormous debt to China. Though some mistakenly believe we borrow all of our money to finance our upside-down economy from China, the truth is that they hold only about one-tenth of our total debt, which is about the same amount as we owe to Japan.

What’s staggering is that, even at ten percent of our total indebtedness, that still amounts to well over one trillion dollars. That, in itself, is close to $3,700 for every man, woman and child in the United States, plus interest. And if you consider that we owe ten times that much, it’s nothing short of depressing.

Still, the fact that China is both one of the largest debt-holders for the U.S., combined with their growing presence on the global economic and political scenes, causes many to shudder at the idea that a communist nation who differs from us on so many basic issues (human rights not being the least of them) has so much control over both our present and, arguably, our future. And although there is am oral case to be made both for the shortcoming of such profound indebtedness, and particularly in owing money to a superpower whose human rights record is fairly horrendous, the strategic argument for such debt being portentous of our inevitable demise may be, as Mark Twain once said, greatly exaggerated.

Some might even argue that such debt might be the only thing to prevent a major world war down the line. 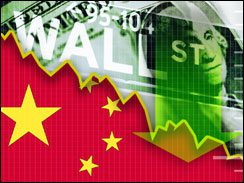 Consider two financial dynamics at play here before falling into one camp or the other on this. First, we owe an actual mountain of money to China which, if we went to war with them, they would most likely never get back. And the kind of money China seeks to invest internationally is on the scale that there are only so many buyers in a market of that size. More specifically, we’re the only ones who consume so much, yet to date retain a sterling credit rating. We’re considered one of the best investments on the planet when it comes to publicly-issued treasury bills.

Second, we turn around and use much of that borrowed money to finance our trade deficit with China, meaning that they sell us way more stuff than we sell to them. So basically, they loan us money to buy stuff from them. They get the money back at a profit, and then loan it back out to us (with interest) to start the whole cycle over again.

I know, it sounds like the very definition of insanity, and by most accounts, it is. But thus far, China is such a capital-rich and manufacturing-dependent economy that if either of those streams were adversely affected on a large scale (never mind both streams at the same time) they could face a massive economic crisi of their own. This, in turn, could send all other global markets into a downward spiral from which it might take generations to recover.

So is our dependence on the Far East a good thing? Depends on how you look at it. Certainly our current standard of living is untenable and morally questionable, barring some dramatic change in the economic landscape. But with respect to international relations, greed-driven self-interest may prove a more powerful tonic for any socio-political indigestion the two superpowers might otherwise find more divisive.

It’s kind of like handcuffing yourself to your enemy. It may not be comfortable, but at least you’ll always know what they’re up to.