Beer, Hymns and Making Room for the Unexpected 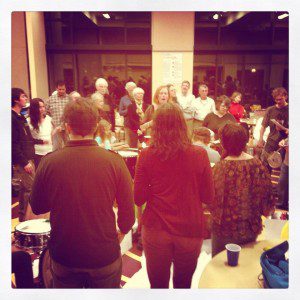 We hosted what some considered a controversial event at the church last weekend called “Beer and Hymns.” Basically, we’ve found that there’s a strange tension to be overcome for many people when it comes to community. On the one hand, most of us long for meaningful community experiences and relationships that allow us to bear witness to one another’s lives. But on the other hand, that need comes beset with all kinds of risks and demands on us too. So more often than not, despite our deepest longings, we find excuses not to engage.

If you invite most people with such reservations to a hymn sing at a church on Saturday night, they’d decline. I know I would, and I work at a church. But add beer to the formula, and suddenly the event becomes something entirely different. Why does the beer matter? I have beer at home, and it’s not like it was some orgiastic free-for-all; we had a two-beer limit. About half of the folks who came didn’t even drink. So what’s the big deal?

It says something important without words. It says that this isn’t the church of your former understanding. It says to expect the unexpected, to blur the lines between church and the world, to come with an open heart and find, with nothing more than a child-like sense of “what’s next?”

The result was more than eighty people, most of whom didn’t know each other, joining together in boisterous singing of songs, old and new (mostly old) in ways many have never heard before. Children banged on homemade drums. Strangers laughed together. And yes, we had BEER IN CHURCH. The walls didn’t crumble. No strikes of lightning. Just joyful, spirited community. Plus, we raised over $400 for a local food ministry and had folks step forward to sponsor another event next month that will celebrate Christmas carols.

Amy hosted a debriefing session the next day after worship to make sure folks felt heard and involved in the changes taking place. Below was a list compiled by those who came about the good and bad about the event. 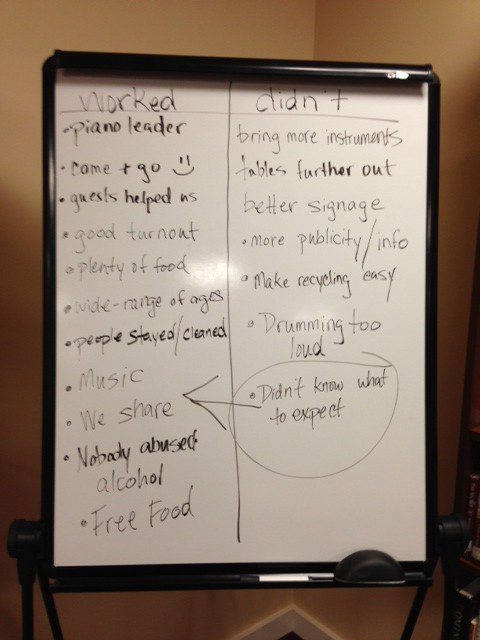 For the most part, the list was very encouraging. The “good” column outweighed the “bad,” and even most of the items listed on the right are simply improvements to make the event even better next time. But I found the final item on the “bad” list particularly fascinating.

Someone mentioned as a concern that they didn’t know what to expect coming in that night. Amy’s response, as you can see in the photo, was to circle it and point back toward the “good” column. This, I think, illustrates in a simple image, the tension the institutional church is experiencing. It recognizes the need to change – perhaps to keep its doors open, or maybe because they’re called to it, or possibly both – but like all of us, we want assurance of what it will look like if we let go, take the risk and step out into unfamiliar territory.

Notice the parallel between what those on the outside of the church looking in are feeling and what those on the inside are experiencing? We both want something new, recognize the need for change, but we’re afraid of the unexpected. And despite how it may feel or appear on the surface, this is good news.

Why? It presents common ground on which we’re all standing. It points to a basic commonality of the human condition. It means we’re really people, not Christians or outsiders. It means we need each other, even if we’re not sure what that means or how to do it.

The beauty of the child-like “what’s next?” sort of anticipation (to which we’re called by scripture, by the way) isn’t so much that it is absent of fear. After all, when I took my daughter to her new preschool, she was as nervous as a nine-tailed cat in a room of rocking chairs. But her trust and excitement overwhelmed the fear, to the point that she jumped in, ready to see what would happen.

November 29, 2012 Morality, Money and "Two and a Half Men"
Recent Comments
9 Comments | Leave a Comment
"awesome."
Brandon Roberts Not “That Kind” of Christian
"nice article."
Brandon Roberts Talking Sex with Invisibilia’s Hanna Rosin
"Thanks for a fun romp. As a Presbyterian minister, I would have welcomed you gladly ..."
Zeigler John Leaving A-Holiness Behind
"Dear Sarah and Christian,I'm sorry for what has happened to you and your mother and ..."
Amazingaljicrowley3679 Letter From a “Demon Possessed” Woman
Browse Our Archives
get the latest from
Progressive Christian
Sign up for our newsletter
POPULAR AT PATHEOS Progressive Christian
1

Halloween Is A Celebration of Change,...
Thoughts of a Modern Celtic Wanderer
Related posts from Christian Piatt