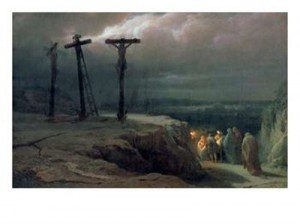 I wrote a piece about communion recently, called “What Does Communion Mean Without Atonement?” which has gotten a lot of attention, both good and critical. That doesn’t surprise me, of course, but it’s such a core element of the Christian faith that I felt it was worth revisiting in some more depth. So below are a few reasons in particular that I don’t ascribe to the idea that Jesus died for the sins of humanity. I understand why many do, and personally I’m OK with them feeling this way. But this theological concept was one of the core factors in my decision to walk away from Christianity for ten years as a teenager. Some of the questions that arose for me were:

Can God really create humanity in such a way that there is something in their nature even God cannot tolerate?

If sin was such a big problem that even God could not bear to be in its presence, why give humanity free will in the first place, assuming you believe we have free will at all? And if you believe that life has no real meaning without free will, why create humanity to begin with if we were destined to fail?

What is it about the shedding of innocent blood that makes anything better? This seems to go against everything the Bible points toward, such as mercy, love, compassion and peace. Was it really more a matter of “just this once and never again?” Is God so weak or inherently flawed that God actually needed this in order to offer forgiveness to humanity?

This leads me to the first reason I don’t embrace blood atonement:

Jesus forgave sin while he was still alive. When he forgave sin, he didn’t say it would be forgiven some time in the future after his death and resurrection. He said “your sins are forgiven.” sounds like present-tense to me. So if he could forgive sin without dying, why did he have to die at all? Is it a matter of volume? I’ve heard the argument that God cannot tolerate human sin, and yet these same people tend to believe Jesus was “God with skin on.” He dealt with sin head-on, so what changed? Was crucifixion a sort of express route to plenary forgiveness, since Jesus could not get around to each person throughout history to forgive them? Do we really see God as so weak and incapable of dealing with God’s own creation?

God called for an end to human sacrifice well before Jesus. The story of Abraham is interpreted in many ways, including the idea that God was testing Abraham’s faithfulness. Another perspective, however, is that this was a message to non-Jews of that era who still practiced human sacrifice that such offerings were not necessary. What was required, rather was that Abraham showed he was faithful by being obedient, rather than by shedding his son’s blood. Also, the story ends with a proclamation from God to Abraham that, “…through your offspring, all nations on earth will be blessed.” But if we were already blessed (all nations) by God, what about the curse of sin? Isn’t God’s blessing sufficient?

The Gospel claims that violence does not redeem. The ancient tribal laws of the Old Testament justified sevenfold retribution as a fitting form of justice. So if you stole one of my sheep, I could take seven of yours. You kill my servant, I kill seven of yours. But clearly this leads to a spiral of escalation that can potentially have no end. So then came the law, “an eye for an eye, tooth for a tooth.” Though some might see this as condoning violence on first blush, it was actually a limitation of the “avenge sevenfold” law that preceded it.

Then comes Jesus, who takes this process one step further; some might say he perfected it, or fulfilled the intent of the law to its completion. He commanded us to repay violence with 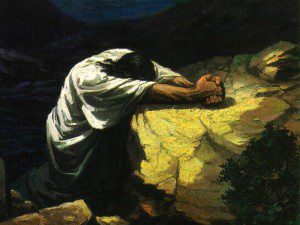 peace, to make ourselves vulnerable by clinging to love in spite of fear. And he lived this out to the very end, just as he did with all of his other teaching.  So as so, I see his crucifixion as the inevitable consequence of a flawed, violent humanity faced with an indomitable, perfect love. But just because such an outcome was inevitable doesn’t mean it was required by God. Jesus called for the end of such violence from his faithful, and in doing so, he placed first and foremost the sovereignty of love. Not just after he died, but during his lifetime.

It is because of this love that he was able to forgive sin, in scripture for individuals and for all time and all creation. Love endures. Love is greater. Yes, Jesus died because of our sinfulness, not for our sins, given this understanding. He was the very model of obedient, persistent, selfless love he wanted for the entire world. And the only way he could truly share it was by living it out completely, regardless of the cost.

It’s understandable why we continue to wrestle with this idea. First of all, it’s in the culture of our faith, as well as in the pagan traditions surrounding it. For millennia, we understood God to be one that required such sacrifice for satisfaction. But this reduces God to being no better than us, really, requiring that WE do something to make things right, and that takes the power of forgiveness out of God’s hands. It actually weakens God.

In this respect, I actually lean toward my Calvinist brothers more (yes, really), because they do not believe God requires ANYTHING from us in order to be God. Not that any of us can know in this life, but I’m going to put my money on the fact that there’s nothing I can do to help God be God, including participating in some kind of necessary sacrifice to satisfy a God that needs something from me. But it was Jesus that God required something of, not us, you may argue. Yes, but without humanity’s complicity in the “passion play,’ there is no crucifixion. In the larger dynamic of story, there is no story without an antagonist. So to believe Jesus had to be crucified for us to be forgiven means that, had we not killed Jesus, God could not have saved us.

To me, this seems to be a more bold position to take than suggesting Jesus died for a reason other than for the forgiveness of sin.

November 14, 2012
Why Powerful Men Get In Trouble (And Why We Care)
Next Post