I know this sounds totally bizarre, but I had a moment of clarity about the value of human life in, of all places, a kid-themed pizza joint yesterday. No, they don’t exploit their workers (that I know of, short of submitting them to overstimulated kids all day). It took a few steps for me to get there, so bear with me.

Yesterday, my daughter, Zoe, turned four years old. It’s a crappy time of year to have a birthday party, since lots of people are out of town, and those who are around are more or less partied out from the holidays. On top of that, we just moved here a few months ago and hardly know anyone. So to try and make up for all of that, we let her pick anywhere she wanted to go for dinner.

Not surprisingly, she picked John’s Incredible Pizza Company, which is like Chuck E Cheese on steroids. Not high on my list of choices, but hey, it wasn’t my birthday. Zoe’s grandparents are in town and they invited a couple other family members who live nearby to join us. One of Amy’s distant cousins brought along her husband or boyfriend (still not sure which), and I remarked after the dinner to amy that he bore a striking resemblance to the alt-rock front man Perry Ferrell, of Jane’s Addiction fame.

“What ever happened to Perry?” Amy asked. Short of founding the Lollapalooza Festival and hitting every Coachella festival ever held, I had

nothing. So I Googled him.

Back in the day when Jane’s Addiction was in its prime, Ferrell was a gangly waif of a singer who looked to be more groovy vibes and drugs than human being. So I was more than a little surprised to find that, at 53 years old, he’s not only still touring regularly, but he’s also ripped from head to toe.

Anyway, I kept reading about his accomplishments, including some work I hadn’t heard about before that he did as an environmental and human rights activist. Though he has a number of accomplishments to his credit in these areas, an excerpt from his Wikipedia page particularly jumped out at me:

In December 2001, Farrell flew into politically-troubled Sudan with other members of Christian Solidarity International to negotiate the release of Sudanese slaves. Jane’s Addiction donated their earnings from one concert for the redemption of over 2,300 people. Once the redemption agreement was signed, Farrell started up freedom parties at various redemption sites. “He began dancing and singing,” said an associate; “I wasn’t sure what would happen, but then everyone joined in. Everyone was dancing. Even the Arab retrievers joined in. It was Christians, Muslims, and Jews all dancing together. Arabs, Africans, Americans, and Europeans — all.”

There’s a lot that struck me about this – that he would travel with a Christian group across the world, among others – but most of all, I was stunned by the number of people whosefreedom was purchased with the proceeds from a single concert. At first I was exhilarated by imagining the thousands of lives changed forever because of this one generous act. But it was also terribly sobering to consider both that another human being’s life could be considered so cheap and expendable, and also that it was more effective to throw a benefit concert and give the money away than simply to appeal to our better nature as Americans to pay a few bucks for another person’s life.

Finally, I was nearly brought to hopeful tears by the scene portrayed by this observer, quoted above. I picture Farrell almost like King David, dancing with unbridled joy around the walls of the kingdom. And this joy was so full that it could not be contained; rather, it spilled over, washing all who were present in a moment of complete liberation, not just from physical bondage, but from all that would divide, oppress, subdue or otherwise hold us back from God’s call for justice and radical, boundary-smashing love.

I’ve always loved Jane’s Addiction, and though he’s a little bit goofy, I’m a big Perry Ferrell fan. But who would have thought that a chance encounter in a kids’ pizza joint and a subsequent search online for some pop culture trivia would reveal a glimpse of the as-yet-unrealized but nearly tangible kingdom of God?

Someday, I suppose I might actually stop being surprised. 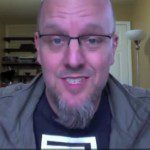 January 4, 2013 VIDEO Church Sign Epic Fails, "Big Ass" Edition
Recent Comments
6 Comments | Leave a Comment
"awesome."
Brandon Roberts Not “That Kind” of Christian
"nice article."
Brandon Roberts Talking Sex with Invisibilia’s Hanna Rosin
"Thanks for a fun romp. As a Presbyterian minister, I would have welcomed you gladly ..."
Zeigler John Leaving A-Holiness Behind
"Dear Sarah and Christian,I'm sorry for what has happened to you and your mother and ..."
Amazingaljicrowley3679 Letter From a “Demon Possessed” Woman
Browse Our Archives
get the latest from
Progressive Christian
Sign up for our newsletter
POPULAR AT PATHEOS Progressive Christian
1